Exodus 29:38–42, In the morning…at twilight.(See also Lev 1:1–17 and Num 28:1–15.) Heb. erev meaning “twilight or between the evenings.” According to Alfred Edersheim, the morning sacrifice was offered at 9 AM and the evening sacrifice was offered at approximately 6 PM, since Israel is closer to the equator making the day and night portions on average closer to twelve hours each (The Temple–Its Ministry and Service, p. 108, by Alfred Edersheim). He then goes on the show that by the time of Yeshua, the Jews had changed the time of the evening sacrifice, so that it commenced earlier. By this time, the lamb was killed at about 2:30 PM with the pieces being laid on the altar about 3:30 PM. The whole evening sacrifice service would last until about 4:00 PM (ibid., pp 108–109).

This twice daily offering was known as the continual burnt offering (Heb. olah tamiyd), and was offered at the door of the tabernacle (verse 42). This sacrificial offering has great spiritual implications for the serious disciple of Yeshua and relates to his or her daily life. The word continual (Heb. tamiyd) means “continually.” The Hebrew word for burnt offering is olah meaning “ascent, stairway or steps,” and derives from the basic Hebrew verb, alah, meaning “to go up, climb or ascend.” In this offering, the fire consumes the entire animal, and the word olah refers to the smoke of this whole burnt offering ascending to heaven, which is a “sweet aroma” to YHVH (verse 41). The olah was an offering or gift (Lev 1:2, Heb. qorban)to YHVH and could be a bull, goat, ram, turtle dove or a pigeon as long as it was a perfect specimen without defect (Lev 1). If an Israelite sinned, he could bring this gift-offering to the door of the tabernacle where he would place his hands upon the head of the animal, after which the priests would slaughter it, and sprinkle its blood around the altar of sacrifice just inside the door of the tabernacle (Lev 1:2, 4, 5). The meat was then prepared and arranged on the altar and entirely burnt (Lev 1:6–17). When the sinner laid his hands on the animal, it was as if he were transferring his sins onto the innocent, blemish-free animal, where upon YHVH accepted it as an atonement for the person’s sin (Lev 1:4).

The writer of Hebrews clearly teaches that this offering (along with all the other offerings in the sacrificial system) pointed to Yeshua, our Great High Priest, whose atoning death on the cross fulfilled all the types and shadows of the Levitical, sacrificial system (Heb 4:14–5:7; 7:1–10:18).

END_OF_DOCUMENT_TOKEN_TO_BE_REPLACED

Psalm 141:2, Prayer…incense. The prayer of the righteous are as sweet smelling incense going up before the throne of Elohim (Rev 5:8; 8:3, 4),and is a form of praise and worship, and which this verse likens the evening sacrifice offered in the Tabernacle of Moses. This is the higher sacrificial system to which the Levitical system pointed, and which elsewhere Scripture calls the sacrifice of praise (Jer 33:11; Heb 13:15 cp. Ps 54:6). Thanksgiving to the Almighty is also an aspect of this higher sacrifice (Lev 7:12–13 cp. 2 Chron 29:31; Pss 107:22; 116:117; Jon 2:9; Heb 13:15). Worship, praise and thanksgiving should be the daily incense that the saints lift up before Elohim. Why is prayer a sacrifice? To take time out of our daily routines and away from the pursuits of life including making money, time with family and friends and doing the things we want is a sacrifice of our time and effort. It shows the Almighty not only our love and devotion, but faith in and dependence on him and thankfulness for all that he has given us.

There is a great lesson in this when we’re trying to hear from YHVH. Namely this. Turn off the phone, television and computer when you want to hear from Elohim. In other words, get a way and alone from it all. This is because the cares of this life are like weeds that choke out the Word of Elohim as Yeshua taught in the Parable of the Sower (Matt 13:22). Get alone (away from other people) when you want to connect with Elohim (Luke 18:13–14). Vacate to some quiet and secluded place outdoors as Yeshua did numerous times (Matt 4:1; 14:23; 26:36; Mark 1:35; 6:46; Luke 5:16; 6:12; John 6:15), where you’ll shielded from outside distractions.

How many times have we heard of people receiving divine revelation while in the shower, early in the morning hours or at some other time when they’re relaxed, alone and quiet? Perhaps this has happened to you. This is because our Father in heaven says, “Be still and know that I am Elohim.”

Psalm 27:4, Behold. Literally to see as a seer in an ecstatic state, to perceive by experience or with intelligence. (See also Ps 63:12.) There is more than one way to come into contact with the beauty, favor, delightfulness or pleasantries of YHVH.

The psalmist talks about going into the tabernacle to encounter YHVH. Since there is no longer a tabernacle in which the saints can go to seek YHVH, where do they now go?

The saint is the tabernacle or temple of the Spirit of Elohim, and the Spirit dwells in one’s personal spirit. This means that one must go inside himself to seek and behold beauty of YHVH. Perhaps this is “the secret [or the covered, private, hidden or protected] place” to which the writer makes reference in v. 5.

Psalm 27:4, 8, Inquire…seek. Literally “look for, consider or reflect.” Such an effort takes time and energy to do, and to accomplish, one must quiet down the rambunctiousness of the soul (the mind, will and emotions), so that the personal spirit can rise up and speak. 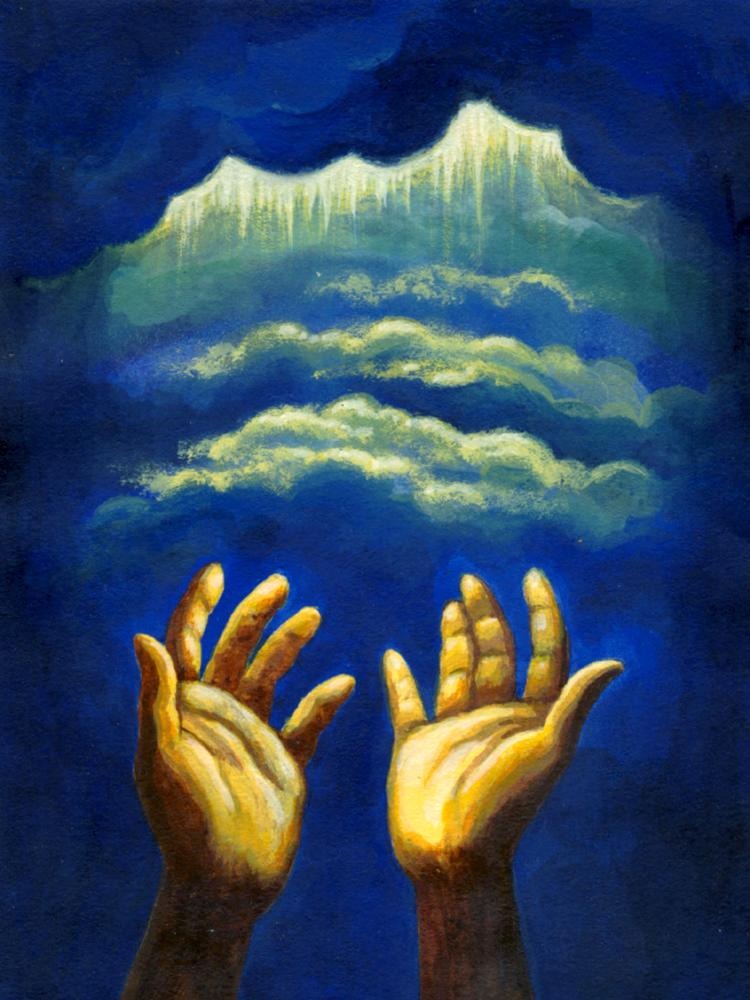 Deuteronomy 26:4–11, You shall answer. This was the prayer that one was to make when one brought their tithe to YHVH. Bringing one’s tithe to YHVH was an act of gratefulness and worship and was brought with a joyful heart for the blessing the Almighty had bestowed upon the tithe-giver.

Deuteronomy 26:11, You shall rejoice. Bringing one’s tithes and offerings to YHVH is to be a joyful event since it is a reflection of our gratitude to him for abundantly blessing us. (Compare this verse with 2 Corinthians 9:6–11.) Giving to YHVH is a form of worship since it allows us to put our treasure where our heart is (Luke 12:34). Please join me in praying this prayer:

Father, help us to give to you out of the abundance of our hearts joyfully and with gratitude for your blessings and bounty in our lives. Help me not to be a fair-weather giver only, but to give out of obedience, even sacrificially, that we may learn to have faith in your promises of provision and to obey you no matter the circumstances. Amein.

(For a brief study on tithing and giving, please see my teaching entitled, “Is Tithing for Us Today?” which is available on our ministry website at http://www.hoshanarabbah.org/pdfs/tithing.pdf.)

Exodus 25:22, There I will meet with you. Between the two cherubim was the glowing, anointed, manifest Presence of YHVH called the Shekinah. This pictures the glories of the New Jerusalem and life happily ever after for Yeshua and his spiritual bride.

The manifest Presence of Elohim is the last of seven “items” in the tabernacle and it is also the one ingredient that is missing in all the other religions of the world. Yes, many of the world’s false religions have their signs, wonders and supernatural experiences, but these are cheap demonic counterfeits that only imitate the real thing. In the end, despite all that they promise, they bring shame, confusion, guilt and eventual death and eternal separation from Elohim.

In the Tabernacle of Moses, the first six items were made with human hands. Six is the number of man. YHVH’s Presence cannot be constructed by the hand or mind of man. It just is, and it doesn’t come as a result of anyone conjuring it up. It comes as a result of repentance, holiness, obedience and humans seeking Elohim with all their hearts, while following the protocols he has laid out, which, when followed, lead to him. There is no other way.

The Presence of Elohim is what is missing in every other of the world’s religious systems. It was even missing in the Second Temple!

In YHVH Elohim’s Presence, a human is miraculously changed and transformed spiritually from the inside out.

There I will [Heb. ya’ad] meet with you…I will commune [Heb. d’bar]…I will give you. This entire verse is pregnant with spiritual meaning relating to the holy of holies, which was YHVH’s point of contact between heaven and earth. From this END_OF_DOCUMENT_TOKEN_TO_BE_REPLACED

Luke 18:2, A judge. In this parable of the Persistent Widow and the Unjust Judge, Yeshua is using a Hebraic form of reasoning or argument called kol v’khomer where a point is made from a lesser weight argument, logically-speaking, to heavier weight one. In other words, if premise A is correct, then how much more so is premise B correct?

In the Jewish religious thinking of the first century, this is one of the seven laws of biblical interpretive laws of Hillel the Great (ca. 32 b.c. to a.d. 7) who was one of the greatest Jewish religious leaders of Yeshua’s day and a main leader of the sect of Pharisees. (Hillel was also the grandfather of Gamaliel the elder, the mentor of Paul, the apostle, Acts 5:34; 22:3.)

In this parable, Yeshua is making the point that if an ungodly, secular judge who cares little about the needs of a widow will grant her wishes because of her persistent pleas for justice against her enemies, how much more will Elohim hear and answer the prayers of his elect saints who have faith in him and cry out to him continually to avenge them of their enemies.

A day of judgment is coming when the scales of justice will be balanced in favor of the saints of the Most High Elohim, the Just Judge of the universe. Certainly Elohim presently attends to the needs of his servants and gives them victory over their enemies in many small ways. But many believers are still suffering greatly at the hands of the wicked who don’t fear Elohim.

The day is coming, however, when YHVH will move with a mighty hand and universally avenge his servants of all their enemies small and great. Until then, the righteous martyrs continue to cry out asking Elohim, “How long, O YHVH, holy and true until you judge and avenge our blood on those who dwell on the earth?” (Rev 6:10). His answer to them is to wait just a little longer (verse 11), for the great day of YHVH’s wrath, the wrath of the Lamb, which is coming upon the wicked (verse 17) is coming soon. Until then, YHVH promises to never leave nor forsake his servants (Heb 13:5), so be strong in him!