We are all like little children playing by the seashore with our pails and shovels as we wave our Bibles at each other saying, ” Look at me! See me scoop some sand into my little pail. My pail is yellow and pink. My pail is prettier than yours. Look at the little hole I dug in the sand. See the ocean water fill my little hole.” Some of us are even building sand castles for ourselves that the next wave will wash away. How special!
I wonder what the Creator of the ocean thinks of us?

Thus says YHVH “Let not the wise man glory in his wisdom, let not the mighty man glory in his might, nor let the rich man glory in his riches; but let him who glories glory in this, that he understands and knows Me, that I am YHVH, exercising lovingkindness, judgment, and righteousness in the earth. For in these I delight,” says YHVH. (Jeremiah 9:23–24)
Oh, the depth of the riches both of the wisdom and knowledge of Elohim! How unsearchable are His judgments and His ways past finding out! For who has known the mind of YHVH? Or who has become His counselor? Or who has first given to Him and it shall be repaid to him? For of Him and through Him and to Him are all things, to whom be glory forever. Amen. (Romans 11:33–36)

Jeremiah 16:16, Fishers. Not only this verse, but all of Jeremiah 16:16 is a prophecy about exiled Israel returning from the lands where YHVH had driven them (verse 15). Jeremiah says YHVH would use spiritual fishermen to fish his scattered people out of all the places—even to the ends of the earth (verse 19)—where he had driven them. Some of Yeshua’s disciples were fishermen by trade whom he recruited to become “fishers of men” (John 4:19). Who has that commission now?

Jeremiah 16:19, The Gentiles…ends of the earth. Who are these “Gentiles” that have been scattered to the ends of the earth? The word gentiles is the Hebrew word goyim (Strong’s G1471, Greek: ethnos, Strong’s G1484) This word is translated in the Tanakh (Old Testament) as nation 374 times, as heathen 143 times, as Gentiles 30 times, and people 11 times.

Whenever the word gentile is used in the KJV it is the word gowy or goy. According to Strong’s Concordance, the meaning of goy is “a foreign nation; hence a Gentile; also (fig.) a troop of animals, or a flight of locusts.” According to Gesenius Hebrew-Chaldee Lexicon, the word gowy means “a people, a confluence of men,” and “contextually in holy Scripture it is used to refer to the other nations besides Israel, the foes of Israel, and strangers to the true religion of Israel.”

As already noted, the word goy simply means “people group.” The Greek word ethnos as found in the Testimony of Yeshua (New Testament) is equivalent in meaning to the Hebrew word goyim. So clearly, in Jeremiah 16:19 gentiles is a reference to lost and scattered Israel who has mixed herself with the heathen (Hos 7:8; 8:8), and who is now returning to YHVH.

The use of trees or wooden poles as an object of worship in the ancient world was universal as a fertility or phallic symbol.  In many places, the Bible strongly condemns involvement with this pagan custom.  Obviously the tree of Jeremiah 10:1–5 is not a Christmas tree, since Christmas as we know it didn’t enter into Christianity until about the late fifth century AD. However, the pagan implications of the Christmas tree are clear as evidenced by history, which is why it was outlawed by the Puritans and many other religious groups in America in the 1700s. It was not until the 1850s with many Germans migrating to America with their Christmas tree tradition that Christmas became popularized again in this country.

Often our view of the Scriptures is filtered through our emotions. We all struggle with this spiritual disease. When we’re extremely partial to a belief or an idea, we have a hard time conforming our lives to those biblical scriptures that disagree with us. Thus, we have a spiritual blind spot. For many, Christmas has become a spiritual blind spot because it is so ingrained in our families and the culture. It is perhaps the hardest thing for people to let go of because of family and emotional ties. Each of us has to make the choice: do we love the praises of family or the praises of Elohim more (John 12:43)?

Jeremiah 10:1–5 is the perfect description of what has come to be known as a Christmas tree. The Word of Elohim says don’t do it. This is fact. I didn’t make it up, I just read it and believe it. Further, Jeremiah 10 isn’t a stand alone scripture. When this passage is placed against the backdrop of the heathen practices of the Gentile cultures around ancient Israel, and against the Bible’s repeated prohibitions against (a) Israel’s adopting pagan religious END_OF_DOCUMENT_TOKEN_TO_BE_REPLACED

This message of Jeremiah reveals that the purpose of sacrifice and of all outward acts of worship should be to deepen the inward sense of religion and to stimulate one to a holy or set-apart life. Jeremiah, speaking for YHVH, decries the uselessness of religious activity when accompanied with unholiness and unrighteousness. Furthermore, he denounces the mere mechanical performance of acts of worship; of the superstition that the temple ritual could be a guarantee of security from the judgments of Elohim, while the Israelites were divorced from obedience to YHVH’s Torah. Only whole-hearted repentance could avert a national disaster brought on by YHVH’s judgments (Soncino Pentateuch, p. 439).

What is the true meaning of religion and what was the true purpose of the temple in Israel? Its purpose was to transform people into living temples that would be set-apart or holy unto YHVH Elohim. If they acted one way while in the temple and another way while outside the temple, then the temple activities had only become a mockery of YHVH, a farce and a repugnance to the very one they had supposedly come to worship. Humans may kid themselves by their religiosity, but they cannot deceive the Holy One of Israel who END_OF_DOCUMENT_TOKEN_TO_BE_REPLACED

Jeremiah the prophet received a direct call from YHVH Elohim to warn the nation of Judah, YHVH’s people, of impending judgment if they would not repent and return to his Torah. YHVH commissioned the prophet to warn and to rebuke those at all levels of society: kings, princes, priests and people (1:18). Is it likely that YHVH will raise up a prophet or prophets in the last days prior to the return of Yeshua the Messiah who will be doing the same thing as Jeremiah?

Jeremiah did not feel adequate to the job (1:6), yet YHVH assured him that he was, for YHVH personally had called and empowered him to do what seemed to be an impossible task: for one man, as YHVH’s representative, to set his face against an entire nation and to survive the resulting wrath of the wicked against that righteous man of YHVH (1:7–10; 18–19).

In the end times, will there yet arise true prophets in which the Word of YHVH is shut up like fire in their bones (Jer 20:9) who will utter forth the fiery oracles of YHVH, which like a hammer will smash to pieces the rock-hard hearts of YHVH’s obstinate, rebellious and sinful people (Jer 23:29)?

Yeshua prophesied that in the last days false prophets would arise, and if possible, would deceive the very elect (Matt 24:11, 24). If Satan the adversary has his false prophets on END_OF_DOCUMENT_TOKEN_TO_BE_REPLACED

Genesis 32 is the story of Jacob’s return to Canaan after having been exiled from his homeland for 20 years. This is often referred to as Jacob’s Trouble (from Jer 30:7). His exile occurred after he obtained his divinely promised birthright through shrewd if not unscrupulous means from his brother Esau resulting in his having to flee Canaan for fear of his life due to Esau’s vengeance. Jacob found refuge in the region of Babylonia at his Uncle Laban’s home where he married Laban’s two daughters, Leah and Rachel. Genesis 32 recounts Jacob’s encounter with Esau who, along with his small army, physically stood in Jacob’s way from entering the land of his promised inheritance—later to be known as the land of Israel or Promised Land. 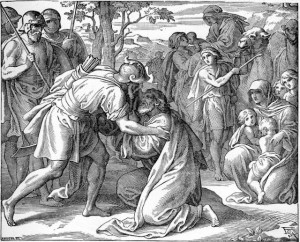 The Jewish sages believe that this encounter between Jacob and Esau is prophetic in nature and will happen again in the end times, but this time on a much larger scale and this time involving the numerous descendants of Israel and Esau. The Israelites will be attempting to return to their ancestral homeland, while the descendants of Esau will be attempting to block their way. As we proceed in this study, we will see whether this prophecy is beginning to come to pass in our days.

Rolling the film backwards a little, Laban had chased Jacob out of the area of Babylon, and yet Jacob was being blocked from entering Canaan by Esau (or Edom meaning “red”). This is reminiscent of Pharaoh chasing the Israelites out of Egypt only to find themselves blocked by the Red Sea, which is a picture of Edom (meaning “red”). In both instances, YHVH’s people were forced to totally rely on him for deliverance from their enemies who were before and behind them.

Chapter 32 is a study in how we often deal with major trials and stressful situations in life. Jacob (a) was gripped by fear, (b) resorted to fleshly schemes to appease his brother’s wrath and “to save his own hide” and that of his family, and (c) at the same time he END_OF_DOCUMENT_TOKEN_TO_BE_REPLACED

Baal was the god of the Canaanites, the enemies of the ancient biblical Israelites. God’s people were constantly being enticed by the heathen practices associated with Baal worship. Down the through the ages, the worship of Baal has resurrected itself and taken on the trappings of each new culture. The concepts behind Baal worship are thriving and growing in our post-Christian culture. To what degree having you fallen for the enticements of Baalism? Before you write this off saying it doesn’t apply to you, please watch this video!