ChaMatzot or the Feast of Unleavened Bread is the second annual festival on YHVH’s biblical calendar, and occurs on the fifteenth day of the month of the Abib, which is the day immediately following Passover (or Pesach, Lev 23:5–8). Because both of these feasts (Exod 34:25; Lev 23:2, 6) occur back-to-back, the Jews often refer to Passover and Unleavened Bread simply as Passover Week or some similar term that places the main emphasis on the Passover. But it must be noted that, though related, these two festivals are separate in meaning and purpose. Passover pictures Israel coming out of Egypt. Upon separating from Egypt, YHVH (the LORD) then commanded the Israelites to put all leavened food products out of their houses and to eat unleavened bread (flat bread) for seven days, hence the origins of the Feast of Unleavened Bread. Additionally, the first and seventh days of this week-long event are Sabbaths, and YHVH commanded his people to hold a set-apart convocation (or gathering) on these Sabbaths.

What, you may ask, is the purpose of putting leavening out of one’s home and eating unleavened bread products such as matzoh for one week? This seems like a curious request by YHVH of his people. Not surprisingly, the Creator of the universe has a reason for everything. The spiritual implications are enlightening and highly relevant to the disciples of Yeshua. In commanding his people to de-leaven their homes and lives, YHVH is teaching us an object lesson that applies to us as much today as to the Israelites of long ago.

Eating unleavened bread for seven days is a memorial, remembrance or reminder (Exod 13:6–9) of our coming out of our own spiritual Egypt. But how did unleavened bread enter into this picture? The Torah tells us that the Israelites left Egypt early in the morning as they were making their daily bread, and because they left in haste the bread was not able to rise (Exod 12:34). Therefore, they were forced, by circumstances, to leave their leavening END_OF_DOCUMENT_TOKEN_TO_BE_REPLACED

Who or what is number one in your life?

I’m amazed at how many so-called Torah or Hebrew roots people do not orient their lives around YHVH’s commanded feasts. They fit their carnal schedules to the feasts, and not vice versa. They observe these divine appointments and commanded assemblies only when it conveniently fits in with job and school schedules or family plans (like vacations and other family events). If Yehovah’s feasts conflict with their their carnal plans, guess what takes second seat? Yep! The feasts.

I’m reminded of what Yeshua commanded us, his disciples, in Matt 6:33.

But seek ye first the kingdom of Elohim, and his righteousness; and all these things shall be added unto you.

Too many times, we seek YHVH’s kingdom only when it conveniently fits in with our schedule. Is this putting YHVH first in our lives? The devil must be laughing at us for our misguided priorities and lack of obedient commitment to Elohim!

Yeshua said of those who pursue carnal things above obedience to him,

But Yeshua said to him, “No one, having put his hand to the plow, and looking back, is fit for the kingdom of Elohim.” (Luke 9:62)

So what excuses do we make for explaining our sinful actions in light of this verse?

Remember what Yeshua said in Matt 22 in the Parable of the Wedding Feast? He invited many people to the wedding feast, but they all had excuses why they couldn’t come. They had jobs, family and other cares of this life to attend to ahead of being at the Master’s wedding feast. What was the Master’s reaction and the fate of those carnal people? Go read what Yeshua said in Matt 22:1–14. In conclusion, Yeshua said, “Many are called, but few are chosen.”

Frankly, I’m totally fed up with people who refuse to put Yehovah Yeshua first in their lives. For many years now I have been pouring out my life trying to stir up the body of Yeshua to seek him first ahead of all the physical things that are more important to them. A few of you are listening. Yah be praised, and I love these people more than words can express. But you are the minority! You know that well. For the rest of you, it’s time to wake up. Yeshua is knocking on the door of your Laodicean lukewarm life and wanting to come in to your life as he states in Rev 3:14–22. You can fool yourself, and some of your friends, but you can’t fool the all-powerful, all-knowing Just and Righteous Judge of the Universe to whom we all will answer for our actions on judgment day whether they were good or bad in his view according to his written word.

Deuteronomy 16:1ff, Keeping the biblical feasts. How important are YHVH’s feast days (annual set-apart times or moedim) to you? The Israelites and first-century Messianic believers planned their entire year’s schedule around them. That’s how important YHVH’s annual festivals were to them. Do we travel END_OF_DOCUMENT_TOKEN_TO_BE_REPLACED

Ezekiel 20:12, 13, 16, 20, My Sabbaths. YHVH cites Israel’s failure to keep his sabbaths as a prime reason for YHVH not permitting the older generation to enter the Promised Land. Judah’s not keeping the land sabbaths determined the length of her captivity in Babylon; namely, 70 years. The writer of the Epistle to the Hebrews brings up the Sabbath issue in chapter four of that book. What is the connection between keeping YHVH’s sabbaths and entering the spiritual rest of his Promised Land? (Read Heb 4:1–11.)

The Sabbath was the eternal sign between YHVH and his people, and it was one of the first Torah laws YHVH called upon Israel to practice. As noted, the failure of YHVH’s people to keep his sabbaths prevented the Israelites from going forward into their spiritual destiny.

Likewise, the fourth or Sabbath commandment of the Ten Commandments is the only one of the ten where YHVH instructs his people to “remember” it implying that they would eventually forget to keep his Sabbaths. History records that the Sabbath was the first so-called Jewish law that the early church left replacing it with Sunday (in the second century a.d.). In the modern Hebrew Roots Movement, YHVH’s people are beginning to leave the non-biblical religious traditions of men by returning to a more true-to-Scripture spiritual walk (a fulfillment of Malachi’s prophecy about the heart of the children being turned back to their fathers in the end days in preparation for Messiah’s arrival [Mal 4:4–6]).

How prominently does the Sabbath figure in the lives of those believers who are returning to the Hebrew roots of the Christian faith? How significant is this prophetically? Is history repeating itself in reverse? Instead of YHVH’s people leaving the Sabbath, they are returning to it. The keeping of the Sabbath is an acknowledgment of YHVH’s sovereignty as the Creator of all, and of his sovereignty over our time, work and lives. Keeping the Sabbath is a direct assault on idolatry, materialism, selfishness, rebellion, and assimilation into the surrounding pagan culture that occurred when Israel forsook the Sabbaths of YHVH. Notice how Ezekiel ties the idolatry, rebellion and general apostasy of Israel with her desecration of YHVH’s Sabbaths. What was Israel’s heart condition that caused her to rebel against this commandment of YHVH? What are the excuses used by many today in order to justify themselves in desecrating YHVH’s Sabbaths?

In Ezekiel 20, we see that YHVH’s feasts (or sabbaths) are a covenantal sign between YHVH and his people (Ezek 20:12) that they were to live by (Ezek 20:11), yet which Israel, in rebellion, refused to do while in the wilderness. Instead they defiled his sabbaths by, presumably, not doing them and doing other things on YHVH’s holy days (Ezek 20:13). Israel’s rebellion against YHVH with regard to their refusal to keep his sabbaths brought upon them YHVH’s judgments (Ezek 20:13). In other words, it was YHVH’s will for the Israelites to keep his sabbaths in the wilderness, but because of their idolatrous rebellion, they refused to do so. In fact, YHVH calls refusing to observe his sabbaths idolatry and for this sin (along with other sins), the Israelites had to wander in the wilderness for forty years (Ezek 20:15–16). In profaning his sabbaths, YHVH accuses the Israelites of despising his Torah (Ezek 20:16). YHVH then goes on to urge his people to not follow the example of their rebellious forefathers, but rather to walk in all of his Torah commands (including his sabbaths, Ezek 20:18–20). Because of their profaning his sabbaths, he punished them by scattering them in exile among the heathens. Those modern saints who refuse to keep YHVH’s Sabbath and feasts are walking in the same sin as the ancient Israelites. Often people who refuse to keep YHVH’s feast days holy do so because the feasts conflict with their secular activities (such as their jobs and recreational activities). YHVH calls this idolatry and being like the heathen (Ezek 20:30, 32). In the end times, YHVH is going to separate his people out from the heathen and bring them back into covenantal agreement with him including obedience to his sabbaths (Ezek 20:33–38). He will purge from his people those rebels who refuse to obey him including keeping his sabbaths (Ezek 20:38), which are a sign of his covenantal relationship with them.

On June 12, 2016, Congregation Elim from Tigard, Oregon and friends of Hoshana Rabbah Biblical Discipleship Resources gathered together to celebrate the Feast of Pentecost (also known as the Feast of Weeks or Shavuot).

Please enjoy these photos we took of this wonderful experience connecting to our biblical, Hebraic roots at YHVH’s appointed time and commanded assembly. 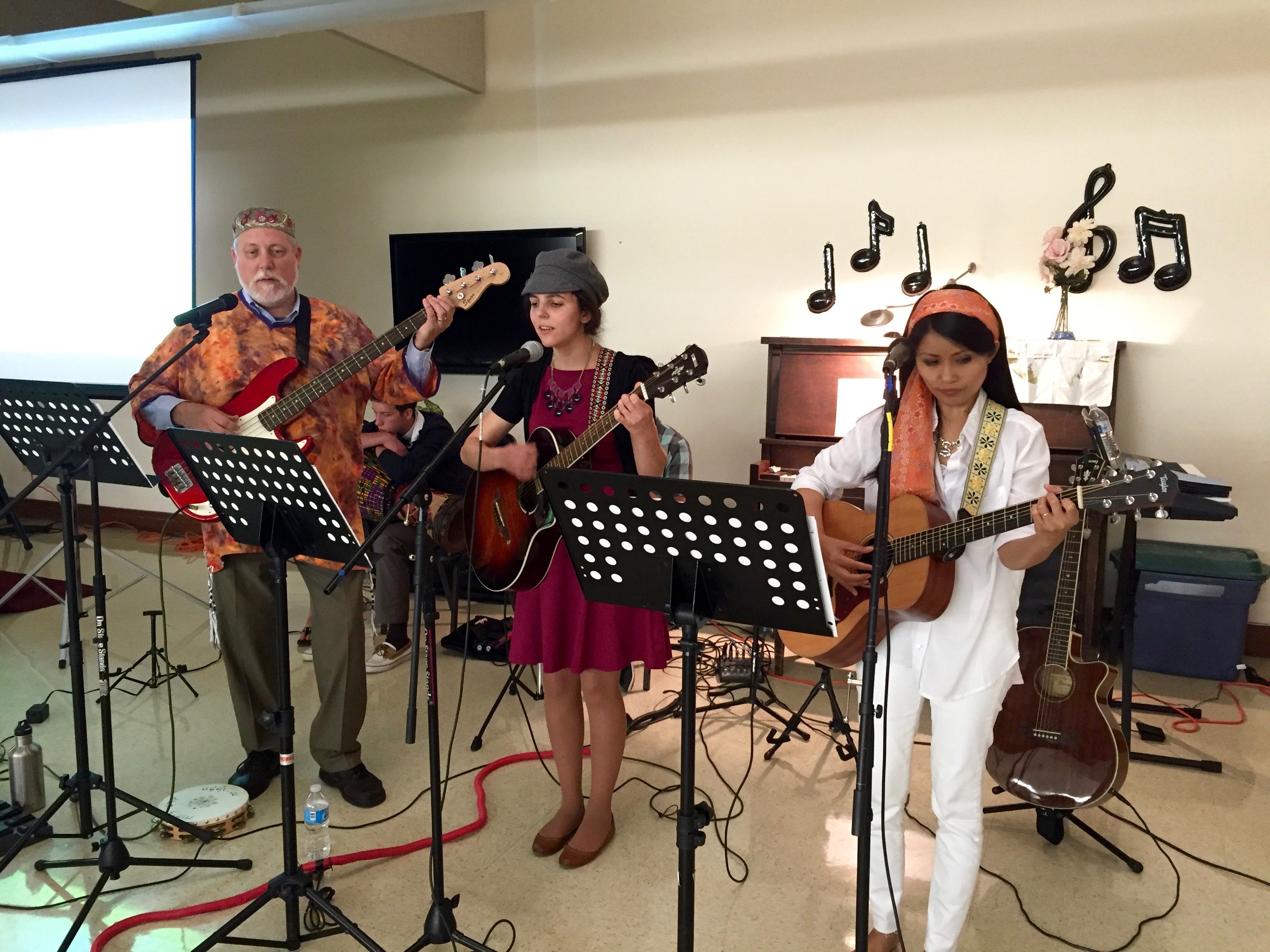 Part of our praise and worship team

Sandi at the controls as we gear up for the liturgical portion of our service. 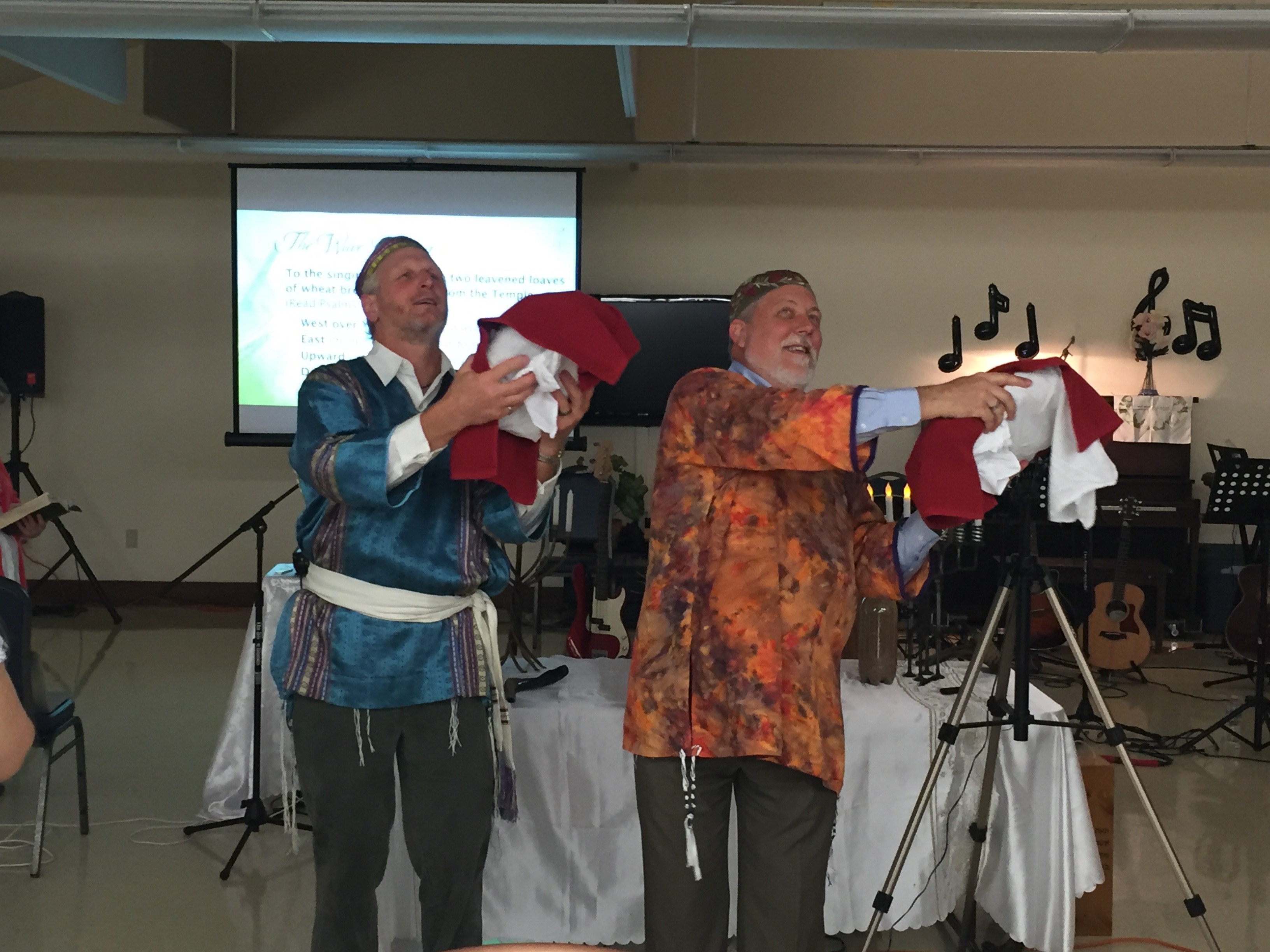 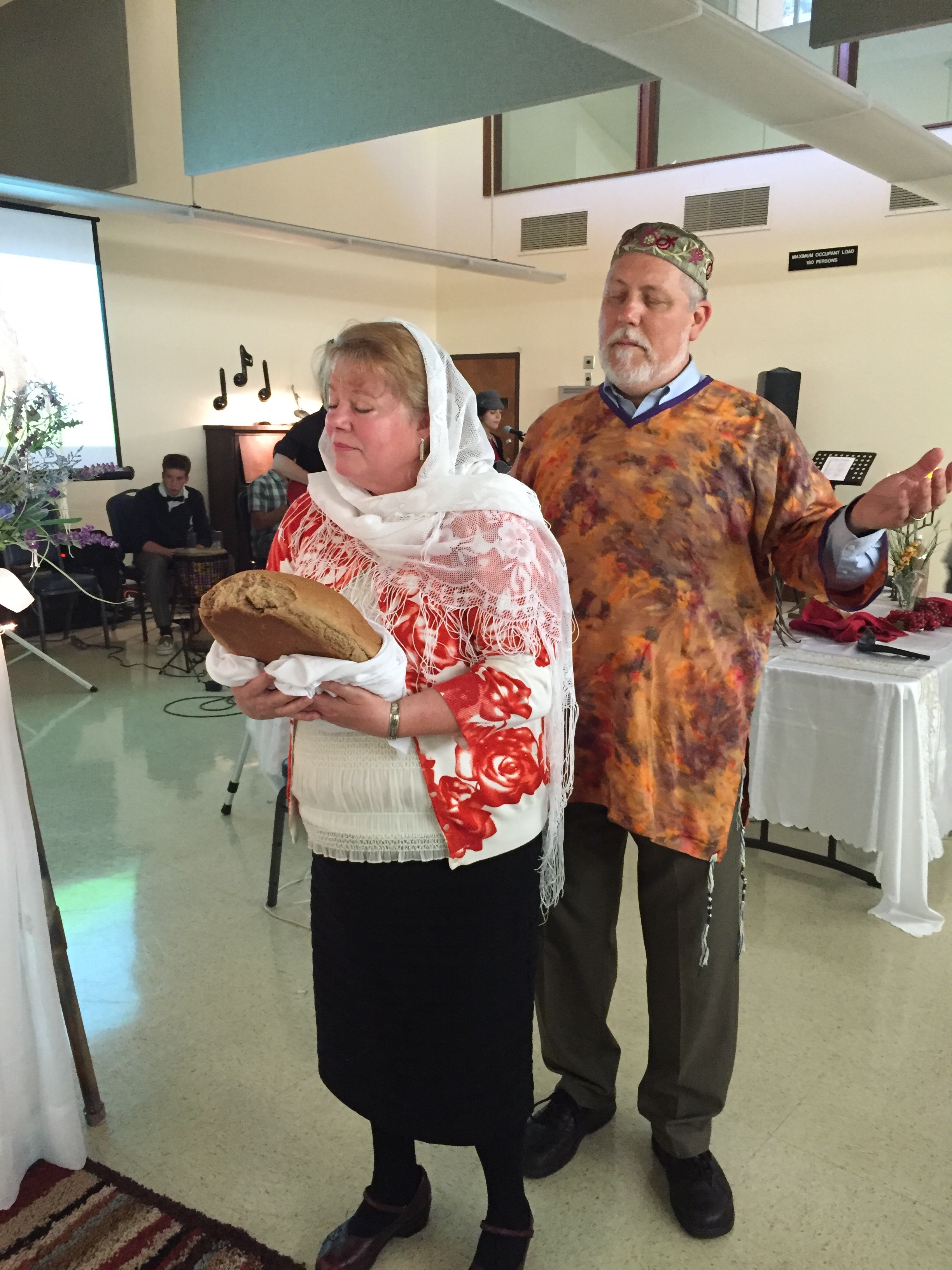 Seeking YHVH inside the marriage chuppah

Seeking the face of YHVH through prayer