Luke 24:30, He sat at the table. (See also vv. 41–43; John 21:12–13). In Bible times, when a covenant of friendship had been broken, as had occurred when the disciples forsook Yeshua prior to his apprehension, the broken relationship would be restored by eating together. After his resurrection, Yeshua had at least three meals with his disciples in order to renew loving covenantal relationship with them (Manners and Customs, pp. 78–79).

In Hebraic thought, one’s table is a sort of sacred altar where familial and spiritual communion occurs. You don’t just break bread with anyone—only your close friends. Additionally, when a prayer of thanksgiving is made over a meal, YHVH’s Presence is invoked making the meal a sort of spiritual act where heaven and earth commune together. This is one reason why the Passover seder meal is of such serious significance. Only those of one’s spiritual family are to gather together at the seder where together they meet with Elohim. Furthermore, this is why Paul states in 1 Cor 5:9–11,

I wrote to you in my epistle not to keep company with sexually immoral people. Yet I certainly did not mean with the sexually immoral people of this world, or with the covetous, or extortioners, or idolaters, since then you would need to go out of the world. But now I have written to you not to keep company with anyone named a brother, who is sexually immoral, or covetous, or an idolater, or a reviler, or a drunkard, or an extortioner—not even to eat with such a person. (emphasis added)

The exact timing of the Passover has sparked much controversy over the years among believers. In the early Christian church it was known as the “Quartadeciman Controversy.” Concerning this debate, which continued into the fourth century a.d. and was finally settled at the famous Council of Nicea in a.d. 325, church historian Philip Schaff in noted multi-volumed History of the Christian Church states, “Respecting the time of the Christian Passover … there was a difference of observance which created violent controversies in the ancient church [resulting in questioning] the genuineness of John’s Gospel” (vol. 2, p. 210). The Quartadeciman Controversy, although slightly different in nature to the subject of this present work, only serves to underscore the volatility of issues of dogma. With this in mind, let us not forget what Yeshua referred to as the “weightier matters of the law”: judgment, mercy and faith (Matt. 23:23). Now let’s begin our study of the timing of Passover.

First, there are some absolutes that Scripture gives regarding Passover:

When Is Passover and When Was the Passover Lamb Sacrificed in the Temple?

And you shall keep it [the lamb] until the fourteenth day of the same month, then the whole assembly of the congregation of Israel is to kill it at twilight [Heb. erev, marginal notes in KJV: between the two evenings].

According to ancient rabbinical sources, at the time of Yeshua, the term between the evenings or twilight had taken on a broader meaning than just twilight as in accordance with the literal meaning of the Hebrew word erev. For the Pharisees, it referred not just to the approximately 45-minute time period just before darkness that we in the west call twilight, to the time period from noon onward when the sun begins to decline from its END_OF_DOCUMENT_TOKEN_TO_BE_REPLACED

For more videos on Passover and the Feast of Unleavened Bread, visit 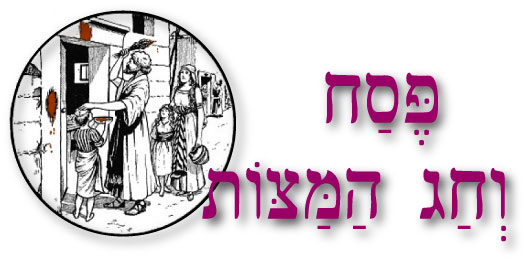 Isn’t your life already busy enough? Who has time for a six-hour Passover Seder commemorating something that happened thousands of years ago? What could this possibly have to do with my life here and now, you may ask? How can a 3500-year-old Biblical ritual in any way relate to those living in the age of the laser, satellites, the worldwide web and computers? Well, let’s see!

The Preacher said in Ecclesiastes 3:15, “That which is has been already and that which will be has already been.…” Life is full of paradoxes. Do advancements in technology, science, economics, medicine, religion, and world government really promise to give men the rest for their weary souls for which they long?

How about a different approach to the questions and problems facing modern man? Is it possible to go forward by going backwards? This is a thesis that the ancient prophet Yermeyahu (Jeremiah) proffered to those who had ears to hear. He said, “Thus says YHVH, ‘Stand by the ways and see and ask for the ancient paths, where the good way is, and walk in it; and you will find rest for your souls. But they said, we will not walk in it’” (Jer 6:16). What were those ancient paths to which this white-haired Jewish prophet referred? This question is answered three verses later: “Because they have not listened to My words, and as for My Torah, they have rejected it also” (verse 19). YHVH through his prophets has been showing men the way of rest for their souls for thousands of years, yet men consistently refuse to listen. They always have a better way, so it seems!

The festival of Passover is one of the most ancient paths to be found in all of the Scriptures. In it are contained clues that will help the partakers of it to understand the past, present and the future.

A God-hater, Karl Marx, the father of modern communism, said that religion is the opiate of the masses. Yes, this can be said of dead, truthless and spiritless religion. But how about that religion which gives definition, purpose, meaning, hope and destiny to a man’s life? How could anything that comes directly from the Loving Father who created you and me in his own image be detrimental to us?

It has been said that the religion of the Bible tells a man where he has come from, where he is at and where he is going. Could it not be said that a man who knows the answers to these questions possesses true wisdom and wealth, and has indeed found rest for his troubled soul?

One of the most important scriptures in the Jewish faith is the famous shema passage of Deuteronomy 6:4–9. This passage, which is like a “pledge of allegiance” for the Jews, starts out by saying, “Hear [shema], O Israel …” The word shema literally means “to hear and to do.” Later, in verse five, the shema continues, “And you shall love YHVH your Elohim with all your heart, and with all your soul and with all your might.” Loving our Heavenly Creator is not just a mind-thing, but also an action and a doing thing. It is END_OF_DOCUMENT_TOKEN_TO_BE_REPLACED

Exodus 10:2, Tell or recount, relate. YHVH commanded Moses to record the story of Egypt’s judgment and fall for the Israelite’s future posterity. The Israelites were to pass this story down orally and in written form to succeeding generations. The Passover seder is the fulfillment of this Torah command in that it re-enacts the exodus story. In other words, YHVH is commanding parents to pass the gospel message of redemption downward to each new generation. The Passover seder is literally a gospel tract involving a dramatic presentation where the participants act out the message of the gospel.