Exodus 38:21, This is the sum of the Tabernacle. Compared to the gold and silver used in the temples of Solomon and Herod, the amounts listed here in the construction of the Mishkan (Tabernacle) of Moses are insignificant.

Both temples fell into enemy hands and were looted and destroyed. Not so with the mishkan. Additionally, the mishkan surpassed both temples in sanctity showing that YHVH places his presence not where there is wealth (or power, prestige, knowledge, acclaim, accolades, credentials), but where there is set-apartness and righteousness.

What are your heart motives, priorities and orientation for serving YHVH—for wanting to be a spiritual temple or tabernacle for him to dwell in? Are you seeking to be set-apart and righteous out of a sincere and humble heart or out of a desire for power, prestige, wealth and acclaim in your life and using “sanctification” as an outward facade to look good to others? In 1 Corinthians 1:26–29 we read,

In this video, Natan begins to decode the mysteries of the Tabernacle of Moses and shows how YHVH’s plan of salvation and the gospel message of Yeshua are encrypted within the tabernacle’s ceremonies and furnishings. The focus of this teaching is on the tabernacle sanctuary. A free study guide is available at http://hoshanarabbah.org/pdfs/tabernacle.pdf. Be sure to check out our other videos on the Tabernacle of Moses.

Exodus 27:1–8, An altar. Just inside the door of the tabernacle was the altar of sacrifice. It was made of acacia wood overlaid with bronze, which is a shadow picture of Yeshua bearing the judgment for men’s sins on the cross. The blood of the sacrifice was poured out on the ground at the base of the altar picturing Yeshua shedding his blood at the cross. Two lambs were offered at the altar morning and evening (Exod 29:38–42). This pictures our need to come humbly before our Father in heaven morning and evening in prayerful devotion as living sacrifices to confess our sins, to praise and thank him (Ps 51:16–17; Heb 13:15; 1 John 1:7–9).

The Altar of Sacrifice in More Details. Upon recognizing that the Person and work of Yeshua is the way into life, light and truth one must recognize that one’s sin liability keeps one from a personal relationship with one’s Creator; the broken fellowship with one’s Creator due to sin’s guilt and penalty (death) must be atoned for; this occurs the altar of the red heifer outside the gate of the tabernacle, which represents the work of Yeshua at the cross (Heb 13:10–13). There one was purified and made ready to come into the actual tabernacle. Upon doing so, the first thing one encountered when entering the tabernacle was the altar of sacrifice where both kosher animals and unleavened bread (made of the finest flour and the purest olive oil) were offered, and a fermented wine libation was poured END_OF_DOCUMENT_TOKEN_TO_BE_REPLACED

In this video, Natan begins to decode the mysteries of the Tabernacle of Moses and shows how YHVH’s plan of salvation and the gospel message of Yeshua are encrypted within the tabernacle’s ceremonies and furnishings. The focus of this teaching is on the outer courtyard. A free study guide is available at http://hoshanarabbah.org/pdfs/tabernacle.pdf. Check out Natan’s other videos on the Tabernacle of Moses.

First Step of Eight: One is in a state of separation from his Creator because of sin. One sees the good news, the light of truth, the message of the cross, the multi-colored door and the luminescent walls of the tabernacle. As one takes his first steps to become separated or set-apart from the confusion, darkness, chaos, emptiness, lostness and death of the world one must first encounter the altar of the red heifer located outside the tabernacle (in later years on the Mount of Olives opposite the temple, Mishnah Parah 1:1ff). There the red heifer was slaughtered and burned and its ashes were used as a sin offering to bring about purification for uncleanness (Num 19:1ff). Yeshua was likewise crucified outside of the camp of Israel and the gates of Jerusalem (Heb 13:10–13). This altar represents the work of Yeshua at the cross. One cannot enter the tabernacle until one has been redeemed and purified by the blood of Yeshua. Even the Israelites killed the Passover lamb outside their homes on the afternoon of the fourteenth of the month of Abib The blood was then smeared on the doors of their homes. Once they entered the blood-smeared doors and were inside their homes they were safe from the death angel who simply passed over them. Likewise, when we enter through the gates of the tabernacle (which are crimson in color, as well as blue, white and purple—colors which point to the four Gospels and the four aspects of Yeshua’s mission as Redeemer) we do so saved and purified. This is the Passover (Pesach), which is the first of YHVH’s seven annual appointed times (moedim).

Second Step of Eight/First Step of Seven: Upon entering the tabernacle one immediately comes to the altar of sacrifice. After the lamb was sacrificed on the afternoon of Passover, that evening (the beginning of the fifteenth day of the first month, which was also the first day and a high Sabbath of the Feast of Unleavened Bread/Hag HaMatzot) the END_OF_DOCUMENT_TOKEN_TO_BE_REPLACED

Why Study the Tabernacle (or Temple)?

These points were taken from the Hebrew Roots magazine, Jan–March 2011, and was written by Dean Wheelock.

The Benefits of Studying About the Tabernacle?

These points were taken from the Hebrew Roots magazine, Jan–March 2011, and was written by Dean Wheelock.

Major Themes of the Tabernacle/Mishkan 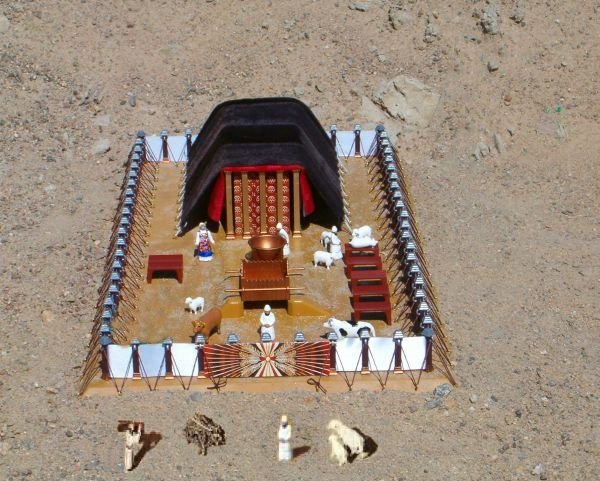 If you were the Creator of the universe, what means would you use to communicate with those that you had created through love in your likeness and image? In a remote way, it’s like a human standing over an anthill trying to communicate with the ants. How do you do it? Similarly, how does an all powerful, Spirit Being, loving Father in heaven relate to his mortal children who are but mere specks of dust without vaporizing them with his raw power? The difficulty is compounded when fearful humans don’t want to hear the voice of Elohim, which is what happened when YHVH Elohim’s voice thundered from Mount Sinai. The children of Israel begged him not to talk to them, lest they die. They asked the Almighty One to speak to them instead through Moses (Exod 20:19).

When man sinned at the tree of knowledge, and YHVH kicked them out of the Garden of Eden, direct communications between man and his Maker were hampered, if not all but cut off. However, Elohim had a plan to restore the loving relationship he had with man before the rebellion. But if men refuse to hear you when you speak, what are you do?

To be certain, the Almighty doesn’t lack for ways to communicate with men. Man is without excuse when it comes to hearing Elohim, for even the heaven’s declare the glory of the Creator and the plans he has for mankind. The visible things of this creation shout loudly about the spiritual mysteries heaven desires to reveal to its earthly subjects. Furthermore, from time to time over the millennia, Elohim has chosen to speak directly to some select servants through dreams, visions, signs, wonders, angels, and even once through a donkey! But how does he speak to a whole nation, if that nation is plugging its ears and refusing to hear its Master’s voice?

Enter into the picture the Tabernacle of Moses, which was literally a three-dimensional gospel message tract. It is the visual demonstration of the whole message of the Bible in a building — the blueprint of the plan of redemption of wayward man. It was a functioning masterpiece of artwork demonstrating the Father’s love for his people, of his desire to commune and to communicate with Israel — his treasured possession, those he had hand picked and called out from the 70 nations of the world. Not only did the tabernacle involve the sense of sight, but the other four senses as well: sound, smell, touch, and taste. It also engaged and even challenged the heart, emotions, mind and spirit of man. The Tabernacle of Moses was a vehicle for the Creator of the universe to communicate with man using a panoply of communicative devices all of which pointed to the coming Messiah, the Redeemer of mankind who would die for the sins of the world to restore man into a loving relationship with his ever-loving, gracious, and longsuffering Father in heaven.

This is the story of the tabernacle, which, in every way, resembles a theatrical play, even a pageant, containing costumed actors each performing his carefully choreographed role on cue. Even a child can comprehend the message of this play, yet it contains mysteries and truths so deep that only in eternity itself will they be revealed to those who have been initiated into higher spiritual levels through the tabernacle’s spiritual paradigms of which its rites and ceremonies were mere prophetic shadows of things to come. To understand it, is to understand the message of the whole Bible from Genesis to Revelation.