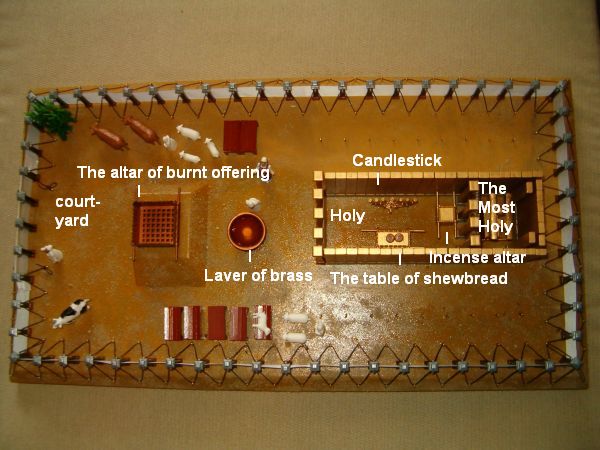 First Step of Eight: One is in a state of separation from his Creator because of sin. One sees the good news, the light of truth, the message of the cross, the multi-colored door and the luminescent walls of the tabernacle. As one takes his first steps to become separated or set-apart from the confusion, darkness, chaos, emptiness, lostness and death of the world one must first encounter the altar of the red heifer located outside the tabernacle (in later years on the Mount of Olives opposite the temple, Mishnah Parah 1:1ff). There the red heifer was slaughtered and burned and its ashes were used as a sin offering to bring about purification for uncleanness (Num 19:1ff). Yeshua was likewise crucified outside of the camp of Israel and the gates of Jerusalem (Heb 13:10–13). This altar represents the work of Yeshua at the cross. One cannot enter the tabernacle until one has been redeemed and purified by the blood of Yeshua. Even the Israelites killed the Passover lamb outside their homes on the afternoon of the fourteenth of the month of Abib The blood was then smeared on the doors of their homes. Once they entered the blood-smeared doors and were inside their homes they were safe from the death angel who simply passed over them. Likewise, when we enter through the gates of the tabernacle (which are crimson in color, as well as blue, white and purple—colors which point to the four Gospels and the four aspects of Yeshua’s mission as Redeemer) we do so saved and purified. This is the Passover (Pesach), which is the first of YHVH’s seven annual appointed times (moedim).

Second Step of Eight/First Step of Seven: Upon entering the tabernacle one immediately comes to the altar of sacrifice. After the lamb was sacrificed on the afternoon of Passover, that evening (the beginning of the fifteenth day of the first month, which was also the first day and a high Sabbath of the Feast of Unleavened Bread/Hag HaMatzot) the Israelites ate the Passover lamb. At the altar of sacrifice the Levites would eat those animals sacrificed there. This pictures the fact that the saved believer must continue to “eat the flesh” and “drink the blood” of Yeshua to stay in communion with him (John 6:35–58), and that when one sins after one is saved they must continue in a state of repentance and overcoming through the blood of the Lamb (1 John 1:7–9). On that evening, one not only ate lamb, but unleavened bread after having put all leavened bread out of one’s home. This pictures the believer walking forward spiritually putting sin out of one’s life. To the degree one eliminates sin from one’s life is the degree one has communion with our Father in heaven. Therefore, the altar of sacrifice in the tabernacle is a picture of the Passover meal and the first high Sabbath of the Feast of Unleavened Bread.

Third Step of Eight/Second Step of Seven: At the bronze laver one ritually washed in preparation for entering into service in the sanctuary. This represents being baptized for the remission of sins, being washed in the water of the Word of Elohim and receiving the Set-Apart Spirit of Elohim. This corresponds with the children of Israel crossing the Red Sea and being baptized unto Moses who was a type of Yeshua (1 Cor 10:2). This occurred during the Feast of Unleavened Bread, and most likely on the last high Sabbath of that week-long festival.

Fourth Step of Eight/Third Step of Seven: The next step takes one to the menorah where the light of the Spirit of Elohim shines in the hearts and minds of men. Here man becomes fruitful ground (the fruit of the Spirit) and becomes empowered to reach a lost world (by the gifts of the Spirit). Once separated, redeemed, washed and transformed by the Word and Spirit one is to become an earthly light (in heavenly realms) shining into the dark world. Humans are the lesser light (moon) reflecting the greater light of the Yeshua, the Sun of Righteousness (Mal 4:2). This occurred for the first-century believers on the Feast of Pentecost (Shavuot)

Fifth Step of Eight/Fourth Step of Seven: Yeshua’s people prepare themselves to meet him at his second coming. At this time occurs the awakening and reunion/regathering of the twelve tribes of Israel around Yeshua, the Bread of Life. This end time event is represented in the tabernacle by the table of show bread with the twelve loaves of unleavened bread. This is all pictured prophetically by the Day of Trumpets (or Awakening Blast).

Sixth Step of Eight/Fifth Step of Seven: At this step the focus is on intimacy and intercession, purity of heart, oneness and relationship with the Father through prayer, praise and worship. This speaks of the final redemption (jubilee) where YHVH’s people will be regathered to worship him in total freedom without the distractions of the world, flesh and the devil (who have been judged). The altar of incense and Day of Atonement (Yom Kippur) are pictures of this.

Seventh Step of Eight/Sixth Step of Seven: This step speaks of total peace (shalom) and Sabbath rest during the Millennium between YHVH and his beloved saints, the bride of Yeshua. It is a time of feasting and rejoicing; a time of Torah, spiritual bread and fruitfulness. The ark of the covenant and the Feast of Tabernacles (Sukkot) picture this step.

Eighth Step of Eight (Eternity Begins)/Seventh Step of Seven (Perfection or Completion Arrived At): This step pictures being totally set-apart to YHVH for eternity. At this point the saints experience the ultimate deliverance from darkness and being bathed in the divine and eternal light of New Jerusalem: the Sun of Righteousness who is the Lamb of YHVH in whom there is total light and no shadows. The shekinah glory above the ark of the covenant speaks to this glorious time of which the seventh feast, The Eighth Day (Shemini Atzeret) is a prophetic shadow-picture. Seven appointed times and seven steps in the mishkan, but eight steps in all picturing perfection and completion and new beginning in the New Heaven, New Earth and New Jerusalem.