Jacobs dream of a ladder to heaven is full and overflowing with a grand message relating to the gospel message including the relevance of Torah, Yeshua the Living Torah-Word of Elohim, what the believer’s spiritual walk should look like, the way to the Father in heaven and the regathering of the tribes of Israel in the last days and much more.

I have posted articles and videos on this amazing dream many times in the past. Here are some links to those past teachings. Even if you’ve studied my teachings before, it’s worth reading them again, since they’re so full of faith-inspiring truths and spiritual nuggets that makes the Bible come alive. Enjoy!

Jacob’s vision of a ladder to heaven is one of those enigmatic Scriptural passages which has befuddled the
keen intellects of many Bible scholars down through the ages. Perhaps the deeper elucidations of Jacob’s
vision has escaped the reader as well. If so, you are not alone, for well-known Christian commentators such as Matthew Henry and Adam Clarke have stabbed at its meaning realizing it has something to do with the Person of Yeshua the Messiah and his heaven-ordained ministry to reconcile earth’s inhabitants to their Heavenly Father and Creator. Keil and Delitzsch don’t even connect this dream to the Person of Yeshua. Other than vague explanations as to the dream’s interpretations, these esteemed scholars have nothing more to proffer the reader. Little if anything is said of the allegorical meaning of the ladder, the dust, the stones (plural) becoming a stone (singular) or of the significance of “the place.” Even the unusually insightful biblical scholar Arthur W. Pink in his book, Gleanings In Genesis, though he draws 101 parallels between Joseph and Yeshua the Messiah, can gives us no more insights into the spiritual and prophetic implications of Jacob’s ladder than do Henry and Clarke. This is some of the best that Christianity has to offer on this subject.

Now what does the best of rabbinic Judaism have to offer us by way of explanation of Jacob’s dream? It goes without saying that their interpretations will be devoid of any references to Yeshua, but can we learn anything else from them. After all, they have been studying this passage for more than 3800 years! Rashi, viewed by some as the greatest Torah expositor of the last 1000 years has little to add to our understanding as does Samson Raphael Hirsch, the great nineteenth-century Torah teacher. The Baal HaTurim in his Torah commentary adds some interesting insights relating to the subsurface or hidden meaning of some of the Hebrew words used in the text that not only confirm the simple or plain meaning of the text, but add depth to it as well on an allegorical or prophetic level. We will cite a number of other Jewish scholars who between them contribute greatly to our understanding of the text. But for all their collective wisdom, they, not surprisingly, fail to connect the meaning of the ladder to YHVH’s plan of redemption and salvation for mankind. They fail to see the big picture and master plan involving the Messiah, the Living Word of Elohim sent from heaven to redeem lost mankind.

Both the Christian scholars and the Jewish sages are blind in part since both have rejected half of the key to unlocking the full depth and panoramic understanding of this vision. The former has, to one degree or another, rejected its Jewish or Hebraic roots and the relevance of the written Torah to theological understanding and lifestyle, while the latter has rejected Yeshua, Living Word or Living Torah sent from Heaven to give us wisdom, understanding, redemption and salvation. Each side is spiritually blind in part to one-half of YHVH’s truth (Rom 11:25). Both have stumbled over the stone of stumbling and the rock of offence (Isa 8:14). The Christians have rejected much of the truth of the written Torah, while the Jews have rejected the spirit of prophecy as revealed through Yeshua, the Living Torah (Rev 19:20). To understand the heart of the Father as revealed in his written word, Yeshua said that it would take both spirit and truth (John 4:23–24). With these thoughts in mind, let us proceed to understand this vision of Jacob.

Let’s now read the text in Genesis 28:10–22 pertaining to Jacob and his dream of the END_OF_DOCUMENT_TOKEN_TO_BE_REPLACED 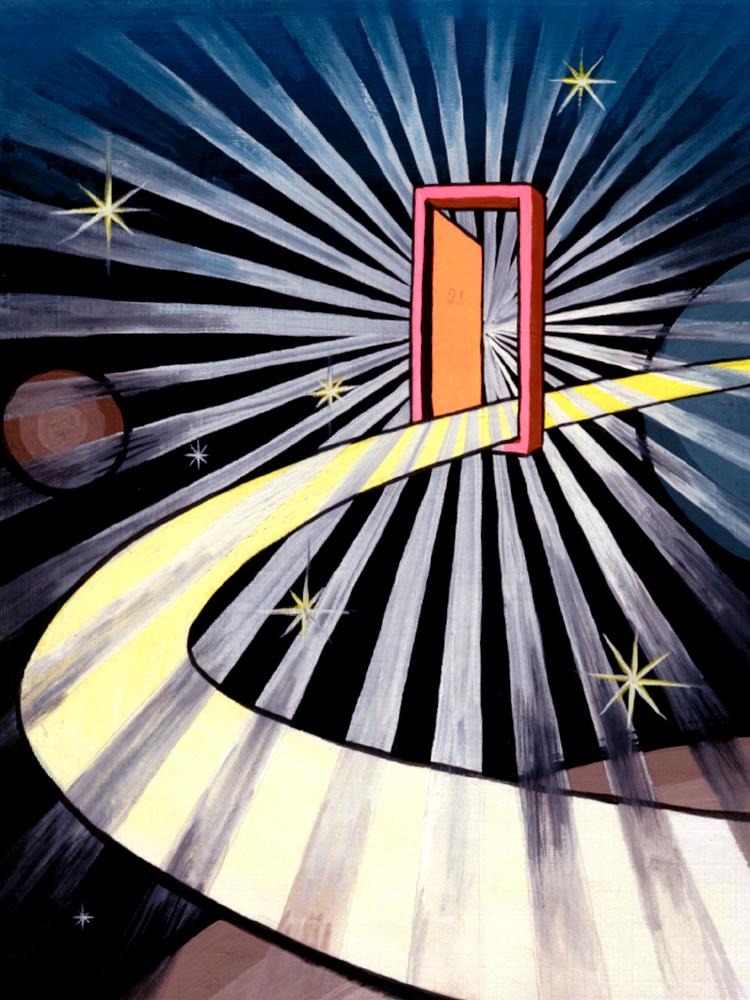 In Genesis 28:10–22, we have the account of Jacob’s dream of a ladder reaching into heaven. The dream greatly amazed Jacob and afterwards he concluded that he had experienced a divine encounter. He named the spot where he had the dream Beth El meaning “House of El (God),” and he concluded that this spot was “the gate of heaven” (verse 17). In Hebraic thought, “the ladder” to heaven is equivalent to the Tree of Life, which is another term for the Torah of Elohim. We know that Yeshua was the Torah-Word of Elohim made flesh ( John 1:1,14). Not only that, Yeshua likened himself to a ladder reaching to heaven (John 1:51).

The term “gate” (or door) itself in Matthew 7:13 is a Hebraism referring to the means by which one enters into the Tabernacle or Temple of Elohim (Exod 27:14, 16; 32: 35:17; Ezek 40:3, 6, 7, 8, 9, 10, 11, 13 etc.). The Tabernacle (or Mishkan) of Moses was representative of the pathway to redemption or salvation. Before actually entering the tabernacle, one encountered the altar of the red heifer, which is a prophetic picture of the cross of Yeshua. To enter the tabernacle, one passed through a multi-colored gate. One of the colors was crimson, which represented the blood of lamb on the door posts of the Israelites’ homes on Passover eve. After that, one would come to the brazen alter of sacrifice, which pictures the new believer dying daily, after the example of Yeshua on the cross, and daily ingesting of the “blood” and “body” of Yeshua (pictured by the Christian ritual of communion), the Lamb of Elohim.

Yeshua fulfilled all these prophetic types and shadows. He said that he is the door or gate ( John 10:7, 9, 10) by which all must enter to have salvation (Acts 4:12), in order to have access to the Father in heaven (John 14:6). Yeshua told the rich young ruler that the Torah (both the Written Torah and Yeshua the Living Torah-Word of Elohim) was the path to eternal life (Matt 19:16–17). Moreover, the Torah points to Yeshua who was the “aim” or “goal” (not the “end” or “termination” of the Torah, as Rom 10:4 is often mistranslated as in most of our English Bibles) of the Torah who is the Living Torah-Word of YHVH ( John 1:1, 14). Yeshua said that he was the way (to the Father in heaven), the truth and the life ( John 14:6), and that the Word of Elohim is truth ( John 17:17). The only Word of Elohim that existed when Yeshua spoke these words was the Tanakh (or Old Testament).

Yeshua defined himself as the truth, so what is truth? How does Scripture define “truth”? In Psalm 119:142 and 151, David says that the Torah-law and Torah-commandments of Elohim are truth. It’s this simple! Any religious theology that attempts an end run head face into the truth of Torah. Period!

We see the concept of gates in the messianically prophetic verses of Psalm 118:19 and 20. Here the Messiah (Yeshua) is likened as gates of YHVH and gates of righteousness (Ps 119:172 defines “righteousness” as “all of thy Torah-commandments) which all the righteous shall enter.”

So Yeshua is the gate, or the straight way of life and truth, the door to salvation or redemption and the way to the Father in heaven. He is the Word of Elohim made flesh or the Living Torah (John 1:1, 14).

Are the “angels” Jacob saw in his dream angels or the saints?

I received the following question from S.P. in Owego, NY about something I wrote in a recent blog post. Here’s the question.
We read your blog of Happy Shavuot 2017. Great Article and agree how important it is to continue to go higher in our relationship with YHVH Elohim!
The following is from the section labeled “Following the Glory Cloud Onward and Upward”:
“The angels or, more correctly, the messengers going up and down that ladder that Jacob saw in his dream are the glorified bride-saints of Yeshua, who will be ruling and reigning with Yeshua from the New Jerusalem over his millennial kingdom.”
Would you be able to give us some references as to how you know that the angels going up and down the ladder are the glorified saints and that they are ruling and reigning with Yeshua from the New Jerusalem over his millennial kingdom?
Here’s my answer:
The word “angels” in reference to Jacob’s dream is the Hebrew word malak which simple means “messenger.” It can be a divine messenger such as an angel, or it can refer to the preincarnate Yeshua who is referred to in our poorly translated English Bible numerous times as “the Angel of the LORD/YHVH.” Obviously, Yeshua is not an angel in the traditional meaning of the word. He is, however, the messenger of  Elohim as the Word of Elohim sent to man. So angel simply means messenger. It can even be a human messenger as well.
Now go to John 1:51 where Yeshua says that the angels of Elohim are descending on the Son of Man—that’s Yeshua. From this we know that the ladder that Jacob saw was a metaphor for Yeshua who is the way of salvaston. He is the way to the Father. We must go through him to come to the Father. This is how we gain salvation. This obviously applies to humans, not to angels. The word for angels in John 1:51 is the Greek word angelos which is equivalent in meaning to the Hebrew word malak. It can mean a human messenger as well as an angelic one. From Yeshua’s statement, we know that it has to be referring to the saints who are YHVH’s messengers to the world. This, in my opinion, based on good evidence, is what Jacob saw.
To take this one step further, in the book of Revelation, there is strong evidence that the New Jerusalem will be hovering over the earth during the millennium. If this is the case, this will the habitation of King Yeshua who will be ruling the  earth. The glorified saints will be kings and priests helping Yeshua to rule and as such will to likely going to and from earth to the NJ to receive instructions and teachings from Yeshua which they will then come back to earth to implement during their millennial reign of the humans living on the earth at this time. I believe that this is what Jacob saw in his prophetic dream. This all may seem a bit suppositional to some, but it makes sense to me when we put all the pieces together.
Here is a link to an article I wrote on Jacob’s ladder dream and its spiritual and prophetic implications for those who want to go real deep on this fascinating subject: https://www.hoshanarabbah.org/pdfs/ladder.pdf
Sorry for the paragraph spacing issues in this blog. WordPress is having problems, which I can’t fix.

The video explains one of the greatest mysteries of the Bible — Jacob”s dream of a ladder to heaven. this is the sotryof hte gospel message, which takes us from the Genesis all the way to the Book of Revelation.