—7:19 Eating in a State of Contamination

—7:28 The Parts of the Offering to Be Burned and Those Given to the Priests as Gifts

—8:1 Consecration of Aaron and His Sons for the Priestly Service in the Tabernacle

1 6:10 [6:3 in Jewish bibles], Linen britches. The Jewish sages teach that every Israelite should be a human temple. If he is set-apart (kadosh), then the temple of his body will be kadosh; if he sins he contaminates it. This is consistent with the teachings of the apostles (see the Testimony of Yeshua readings above). Furthermore, in this parashah we see the high priest donning a “fitted” linen tunic and britches “on his flesh,” which was an illusion to robes of righteousness (Lev 6:10 [3]). Most of us have too casual a view of sin—something a righteous and set-apart Elohim hates and calls an abomination (Ps 5:5; Prov 6:16–19). Sin that is not repented of will damn us eternally (Ezek 18:4, 20; Rom 6:23). Our sin sentenced Yeshua to a hideous death on the cross in our place. (Selah: pause and reflect.)

Perhaps the greatest area of sin is with our mouths; it defiles our spiritual temples probably every day! (Read Mark 7:14–23 and Jas 3:1–12.) Our mouths sow discord among brethren, speak vanities, murders and lies—things that Elohim (his Hebrew name referring to the judgment side of his character) hates and calls an abomination in Proverbs 6:16–19. The tongue is a world of iniquity, especially behind closed doors where we let down our guard with our family and loved ones. There our tongues rip, slice, slash, murder, speak vanities and hypocrisy almost without measure. The word Babylon comes from the Hebrew word bavel meaning “confusion or mixture” referring to when the languages of men were confounded at the Tower of Bavel. How can we be a righteous and set-apart priesthood offering up praise and worship to our Creator with our lips when 30 minutes before our lips were murdering our wife, children, husband or someone else on the way to Shabbat services? Is this not confusion? A divided heart? A forked (serpent’s) tongue? The Scriptures plainly tell us to come out of Babylon’s ways (Rev 18:4). The writer of Hebrews says, “Follow peace (shalom) with all men, and holiness, without which no man can see the Master” (Heb 12:14). If we could but tame the tongue, then we would be able to steer the whole temple of our spiritual ship (to mix metaphors) into the glorious harbors of holiness and relationship with man and with our Creator. Let’s stop and take some time to repent of our sinfulness in these areas.

2 6:17 (10), No leaven. Why does YHVH stipulate this prohibition? The main Jewish commentaries are unable to answer this question. It is not until we understand the spiritual implications of leavening as revealed in the Testimony of Yeshua that this prohibition makes END_OF_DOCUMENT_TOKEN_TO_BE_REPLACED

Matthew 10:38, Cross. This is the first place in the Scriptures where the word cross is mentioned. There is often a spirited debate among those returning to the Hebrew roots of the Christian faith as to whether Yeshua was crucified on a cross, a stake, tree or gallows. For the reason that the cross is a symbol that has been tainted by ancient pagan connotations, many Hebraic believers have an aversion to seeing it as the instrument upon which Messiah Yeshua was crucified. This being the case, we must ask the obvious question: which came first? Was the cross first a pagan symbol or was it a God-ordained symbol that was later corrupted by apostate men? 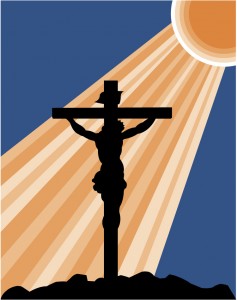 We may never, with certainty, know the answer to this question. But one thing is certain, the origins of the cross as a redemptive symbol are ancient—perhaps as ancient, if not more so, then its uses as a pagan religious symbol. This is proven in the ancient Paleo-Hebrew script, which predates the current square-lettered Hebrew script, where the final letter in the Hebrew alphabet is the letter tav, which looks like our letter “t,” and is shaped like a cross. Because the letters in this ancient Hebrew script were actually pictorial symbols, they were thus descriptive in nature (much like Egyptian hieroglyphics), so the letter tav literally means “ownership, to make a sign, to seal, to make a covenant.”

In the Scriptures we see the symbol of the cross reoccurring numerous times. For example, when Jacob on his deathbed blessed Joseph’s sons, Ephraim and Manasseh, he crossed his arms (making the cross symbol) as he laid his hands on their heads to bless them (Gen 48:14). He then made mention of the Angel or Messenger of Elohim (the pre-incarnate Yeshua) redeeming him from evil (v. 16). This is an obvious reference to YHVH saving Jacob from Esau and Laban (Gen 31 and 32), but is also a future prophetic allusion to the redemptive work of the Messiah at his crucifixion, since Jacob calls on the Redeemer Messenger of Elohim (or the Messiah) to bless his grandsons and their future offspring (v. 16). We know that in Yeshua, the Seed of Abraham, all the nations of the earth were to be blessed (Gal 3:16 cp. Gen 22:18). Certainly, Jacob must have had at least a vague awareness of the future implications of this promise that YHVH had made to Abraham and the redemptive work of the coming Messiah.

Another reference to the cross can found in Exodus 12:7 where YHVH commands the Israelites to kill the Passover lamb and smear the blood therefrom on the side posts and top of their door frames. This is a perfect picture of the cross outlined in blood that flowed from the seven places in Yeshua’s body while he hung on the cross.

We see another outline of the cross in Numbers chapter two in how YHVH instructed the tribes of Israel to be configured around the mishkan (Tabernacle of Moses). If one were to view the encampment from the air as is described in this chapter, we see the outline of a perfect cross. Furthermore, within the tabernacle itself, the furnishings were laid out in the shape of a cross. In essence we see a cross on a cross! Since the tabernacle and all therein was a prophetic shadow-picture of Yeshua himself, we see not so much a cross on a cross, but a picture Yeshua on the cross.

Many more examples could be given, but one will suffice to make the point. In Ezekiel chapter eight, we see YHVH instructing one of his angels to write in ink a mark (literally, a tav or cross) on the heads of his righteous saints in Jerusalem. This tav would preserve them from the destruction that was about to fall on that city (Ezek 9:4). Similarly, in the Book of Revelation in the end times, YHVH will place a seal or mark upon the foreheads of his saints to preserve from his judgments of wrath that will fall upon the earth prior to Yeshua’s second coming (Rev 7:3–4; 14:1). These same end-time saints are those who obey the Torah and who have the testimony or faith of Yeshua who died on a cross to redeem us (Rev 12:17; 14:12). Is this seal a cross? Only time will tell.

In John 20:25 we find another proof that the stake upon which Yeshua was crucified had a horizontal cross beam. There Thomas declares, “Except I shall see in his hands the print of the nails, and put my finger into the print of the nails, and thrust my hand into his side, I will not believe.” The word nails being in the plural in all major English Bible translations indicate that more than one nail was used to secure Yeshua’s hands to the “crucifixion stake.” Had Yeshua been crucified on a stake minus a cross beam, then his hands would have been over his head and nailed to the post with one nail only. The fact that Thomas mentions nails (plural) indicates that Yeshua’s arms were outstretched when attached to the stake requiring a nail in each wrist. This fact seems to favor the idea that Yeshua was crucified on a traditional rather than a simple upright post.

In reality, whether Messiah died on a cross, stake or some other contraption is irrelevant. The fact is that he died for our sins and we must place our trusting faith in him if we are to have eternal life. That is the bottom line! But for those who are adamant that he was not crucified on a cross, they have some ­cross­ reference Scriptures to explain.