Deuteronomy 16:22, You shall not erect for yourselves a pillar, which YHVH your Elohim hates. The word pillar literally means “stand (upright), be set (over), establish.” One of the derivatives of this word is pillar or standing image. Such pillars were erected for pagan religious purposes (see TWOT). C.J. Koster in his book The Final Restoration (reprinted as Come Out of Her My People) cites historical evidence for relating these pillars to the Egyptian and Babylonian obelisk, which was connected to sun worship (see also https://en.wikipedia.org/wiki/Obelisk )and the phallic symbol (also https://en.wikipedia.org/wiki/Phallic_architecture). He states that these pillars were commonly erected at the entrances to pagan temples (also https://en.wikipedia.org/wiki/Obelisk) as fertility symbols in honor of the sun deity (Koster. p. 79). 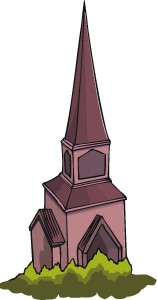 Even as an Egyptian obelisk of this sort sits in the very center of the Catholic Church’s St. Peter’s Square in Rome, so, according to Koster, it is traditional for obelisk-shaped steeples to be found on Christian churches to this day in the form of a steeple (Ibid., p. 81). Richard Rives in his book, Too Long In the Sun, makes the same connection between the Egyptian obelisk, Canaanite standing pillars and the Christian church steeple (p. 136).

What is the point here? YHVH commanded Israel to destroy these pagan symbols and to have nothing to do with them. They were abominations that would defile YHVH’s set-apart people. Have his people heeded his command? Many of these remnants of ancient pagan cultic practices remain in both the Protestant and Catholic churches to this day (Easter/Ishtar, Christmas/Saturnalia, the Christmas tree/Tamuz tree, the Christmas wreath/a pagan fertility symbol, Lent, Easter eggs and rabbits, and the list goes on and on).

Does YHVH’s command to his people of the end times to come out of spiritual Babylon (see Rev 18:4) now take on a new meaning to you?