I have a big problem with this!

Despite all the court battles, legal challenges, trying to appease the homosexuals with “turning the other cheek” (by the way, this is something Yeshua never told his disciples to do in the face of Torahlessness), appealing to the media, the Kleins still ended up having to pay off the perverts because a wicked and ungodly judicial system forced them to do so.

What’s wrong with this picture?

It seems that the saints, with everything stacked against them legally in a satanic-secular society, must reconsider their tactics. It’s getting more difficult for the righteous to win in a court of law. We must pray and seek YHVH for a new, novel approach to defeat our spiritual enemies. Sometimes the conventional frontal attack will work, sometimes not. This was the case when ancient Israel was fighting their physical enemies. Often, they had to seek YHVH for the unique method or battle plan to defeat their enemies. The saints must start doing the same when battling the antichrist Islamo-facists, the Elohim-hating secular humanists (called “Progressives”), the weirdo-new agers and the homosexual-facists. YHVH will give his people plans and battle tactics to defeat the enemy.

Let’s not forget that enemy is is not people, but the evil spirits behind them. We must keep preaching the gospel to the lost sinners. Perhaps this is our greatest weapon — keep preaching the saving message of repentance and Messiah Yeshua to them! — Natan

Now for the story of the day… 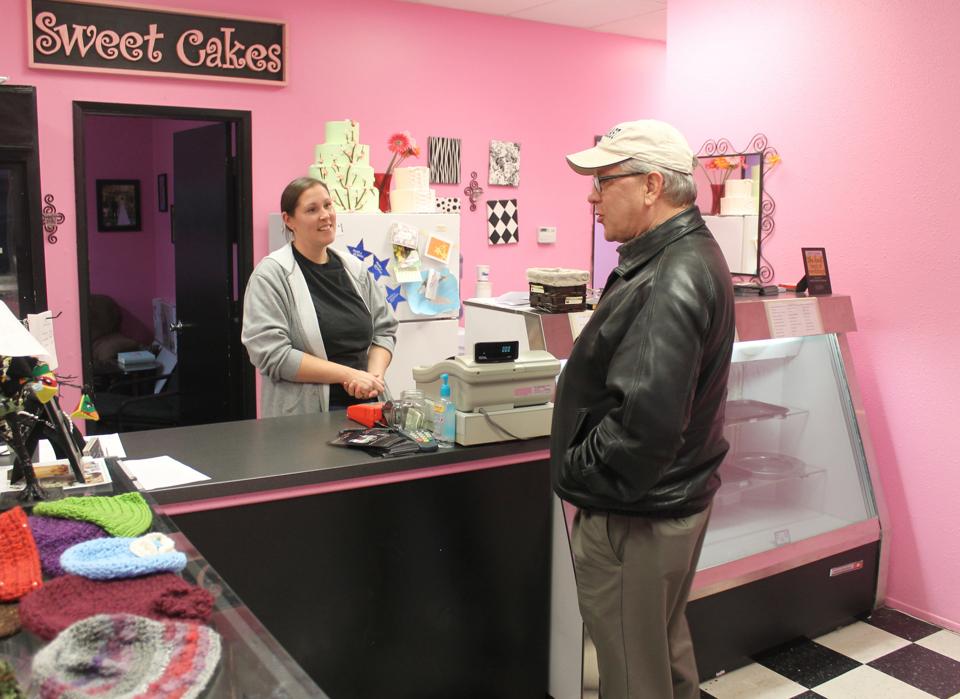 Melissa Klein, co-owner of Sweet Cakes by Melissa in Gresham, chats with a customer in this file photo. She and her husband Aaron Klein are embroiled in a civil rights case stemming from their refusal to bake a wedding cake for a same-sex couple in January 2013.
By George Rede | The Oregonian/OregonLive
on December 28, 2015 at 4:30 PM, updated December 28, 2015 at 5:22 PM

The Oregon bakery owners who ignited a national controversy by refusing to make a wedding cake for a lesbian couple on Monday quietly paid a state-ordered $135,000 damages award and then some.

Aaron Klein, co-owner of the shuttered Sweet Cakes by Melissa, walked into the Oregon Bureau of Labor and Industries’ Portland office and handed over a check for $136,927.07, an amount including accrued interest, agency spokesman Charlie Burr said.

Earlier this month, the labor bureau recovered nearly $7,000 additional funds from the Kleins with the help of the state Department of Justice and a private collections agency, Burr said. The money came from a garnished bank account, he said.

Aaron and Melissa Klein had refused to pay damages of $135,000 to Rachel and Laurel Bowman-Cryer, claiming financial hardship despite three online fundraising accounts set up by supporters that netted them at least $515,000 as of late September.

On July 2, Labor Commissioner Brad Avakian ordered the Kleins to pay damages for emotional and mental suffering, saying they had violated the women’s civil rights by discriminating on the basis of their sexual orientation.

Rachel Bowman-Cryer visited the Gresham bakery with her mother in January 2013 to order a cake for a civil commitment ceremony. Aaron Klein, working alone that day, turned her away, citing his Christian beliefs against same-sex marriage.

The women filed complaints with the state, triggering a national debate over the Kleins’ claims of religious freedom in the face of anti-discrimination laws that require Oregon businesses to serve the public equally.

Tyler Smith, a Canby attorney representing the Kleins, said payment of the debt does not mean his clients have abandoned their appeal of Avakian’s order. The Oregon Court of Appeals is likely to hear arguments next year but Smith said it made sense to pay now while the case is pending rather than incur additional interest charges.

The bureau “was attempting to charge interest rates of 9 percent, equating to $35 a day, and seeking to garnish any assets of the Kleins so they couldn’t earn interest on the money that had been donated to them,” Smith said. “The prudent thing to do, given the generosity of people who have contributed funds, was to take care of it and continue the fight.”

Through their lawyers, the Kleins twice asked Avakian for a stay to delay enforcement of his order while the Court of Appeals considers their case. The commissioner rejected the requests on July 14 and again July 24, citing the amounts raised for the Kleins from crowdfunding sites. State officials subsequently went to court to establish their right to place a property lien or other assets belonging to the couple.

“We certainly wish (the bureau) would have stayed collections efforts during the course of the appeal,” Smith said.

Altogether, the state has received roughly $144,000 from the Kleins – an amount that Burr acknowledged might be in excess of what was owed as of Monday, Dec. 28.

“We have been in touch with their lawyers throughout the process,” Burr said, providing them with exact amounts due to satisfy the debt. The figure has changed from day to day because of accruing interest.

If the Kleins have overpaid, the agency will look at returning the difference, Burr said. The Kleins closed their Gresham bakery in 2013 and now operate out of their home in Sandy.

Paul Thompson, a Portland lawyer representing the Bowman-Cryers, said, “My clients are happy the Kleins paid the fine and are moving forward, and hope to see the ruling upheld on appeal.”

Here are two news articles about Aaron and Melissa Klein who are the Christian cake bakers who refused to make a wedding cake for a couple of homosexuals. The homes sued them, destroyed the Klein’s business and got the State of Oregon to fine them $135,000. Now the State Bureau of Politically Correct Thought and Speech is forbidding them to even speak about their situation. This is pure evil — Satan unleashed upon Bible believers!

First, here is my response to the situation:

Who does Oregon Labor Commissioner Brad Avakian think he is? God? He’s an embarrassment to Oregon and should be voted out of office.

I’m calling out Commissioner Brad Avakian for who he really is. Brad, let’s be honest. You’re on a little power trip to make a name for yourself by attaching your political wagon to the cutting edge issue of “gay” rights in an effort to further your political career, and you don’t care who you destroy in the process! Your putting a gag order on the Klein’s to exercise their Constitutional right of free speech is an illegal act on your part and should be disobeyed. Your aggression against these people and what they stand for has blinded you from seeing the error of our ways. Shame on you! You may win the battle, but in the end, you will lose the war. Shame and disgrace are coming your way!

In reality, you hate Christians who believe in the Bible, the Word of Elohim. That is the real issue here. Search your heart and admit it. The idea of of Bible believers having free speech rights galls you to no end, and you’re doing your part as a petty bureaucratic functionary/public servant to quash their rights, while upholding the so-called rights of sexual perverts to steal, kill and destroy anyone or anything in their way. Let’s also not overlook the political expediency of your opportunistic support of the LGBT community. Your calculations will backfire on you! Make no mistake about it.

The bottom line is that you are doing the work of the devil, the chief opposer of the God of the Bible whose name is Yehovah Elohim. It is him that you’ll answer to whether you believe it or not. In the end, YHVH’s followers will win. In the mean time, your persecution of Christians will only make us stronger and more defiant to stand for righteousness and against the tyranny of petty Soviet-style dictators like you who think you can play god with people’s lives, and force those who disagree with the Party’s Policies to conform.

To those who serve, obey and worship YHVH Elohim, I leave you with several Bible verses for your encouragement:

What shall we then say to these things? If Elohim be for us, who can be against us? (Rom 8:31)

Submit yourselves therefore to Elohim. Resist the devil, and he will flee from you. (Jas 4:7)

Behold, I give unto you power to tread on serpents and scorpions, and over all the power of the enemy: and nothing shall by any means hurt you. (Luke 10:19)

No weapon that is formed against thee shall prosper; and every tongue that shall rise against thee in judgment thou shalt condemn. This is the heritage of the servants of YHVH and their righteousness is of me, saith YHVH. (Isa 54:17)

Blessed are you when they revile and persecute you, and say all kinds of evil against you falsely for My sake. Rejoice and be exceedingly glad, for great is your reward in heaven, for so they persecuted the prophets who were before you. (Matt 5:11–12)

Now onto the articles…