The “Angel” of YHVH In the Pillar of Fire

And YHVH went before them by day in a pillar of a cloud, to lead them the way; and by night in a pillar of fire, to give them light; to go by day and night.

And the angel of Elohim, which went before the camp of Israel, removed and went behind them; and the pillar of the cloud went from before their face, and stood behind them.

Who is this “Angel” of Elohim (elsewhere he is called “the Angel” of YHVH)? Angel is an unfortunate translation. The Hebrew word for angel is malak and simply means “a heavenly or a human messenger.” Prophetically this word can refer to human messengers such as the one coming in the spirit of Elijah prior to Messiah’s coming, as well as to the Messiah himself (as in “the Messenger/Malak of the covenant” in Malachi 3:1). In Genesis 32:22–30 Jacob wrestles with a man Scripture identifies as the Malak of YHVH (Hosea 12:3–5) and whom Jacob called Elohim (verse 30). This same Individual redeemed Jacob (Gen 48:18) and is identified with the Malak of Elohim … the Elohim of Bethel (Gen 31:11 and 13) and appeared to Moses at the burning bush (Exod 3:2). Now he is leading Israel in the wilderness. Again who is he? Stephen in Acts 7:37–39 identifies the Messiah (i.e. “that Prophet” Moses mentioned in Deut 18:15) with the “Angel” or Heavenly Messenger which END_OF_DOCUMENT_TOKEN_TO_BE_REPLACED 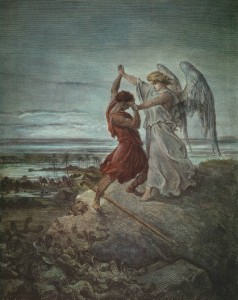 In the following passages, we see that this man was Elohim.

You have power with Elohim and with men, and have prevailed. (verse 28, based on the KJV)

… for you have striven with the Divine [Elohim] and with man and have overcome. (verse  28, The ArtScroll Stone Edition Tanach and Chumash)

Then Jacob says that he has “seen [Elohim] face to face” (KJV, CJB and The Soncino Edition Pentateuch, Second Edition). The two standard Orthodox Jewish versions of the Torah, The ArtScroll Stone Edition Tanach and The ArtScroll Stone Edition Chumash, and Samson Raphael Hirsch’s Torah commentary The Pentateuch (by Judaica Press) all read, “For I have seen the Divine face to face.” Here they have translated the Hebrew word Elohim as the Divine (OHBP OHVKT/Elohim panim).

Which translation of the word Elohim is the correct one? Before resorting to human sources to solve this dilemma, does the Word of Elohim itself interpret this passage for us giving it clear light? Most assuredly so. In Hosea 12:2-5 we read,

[YHVH] hath also a controversy with Judah, and will punish Jacob according to his ways; according to his doings will he reward him. He took his brother by the heel in the womb, and by his strength he had strove with [Elohim]. He strove with an angel [Heb malak or heavenly messenger in many instances referring to YHVH himself, as noted elsewhere in this work] and prevailed: he wept, and made supplication to him; he found him in Beth-El, and there he spoke with us; and [YHVH Elohim] of hosts; [YHVH] is his name. (based on the KJV)

The Stone Edition Tanach renders this passage as follows (starting in verse four):

In the womb he seized his brother’s heal, and with his strength he struggled with [an angel of] God; he struggled with an angel and prevailed; [the angel] wept and beseeched him: ‘In Beth-el He will find us and there He will speak with us.’ HASHEM is the God of Legions; HASHEM is His remembrance. (bracketed supplied word are in the original)

Does the word Elohim mean the Divine? It is interesting to note that in the Authorised Version the word Elohim appears 2606 times in the Tanakh. It is translated as God 2346 times, god 244 times and several other words less than five times each (e.g. judge, goddess, great, mighty, angels). As in all cases with a word which can have several meanings, the context of the Scripture passage will determine its meaning and its subsequent translation from the original language into English. The word divine was not employed in the 1611 Authorized Version (KJV) in reference to Elohim anywhere in the Tanakh, since the word had a pejorative connotation (as in divination or one who divines the future). This is not the case in our modern parlance as the modern Webster’s New Collegiate Dictionary defines divine in its primary definition as “relating to, or proceeding directly from God, being a deity, directed to deity.” All standard English (Christian )versions (NKJV, NAS, NIV, NRSV) translate this passage as “God face to face” and none use the term “the Divine face.” The New Brown-Driver-Briggs-Gesinius Hebrew-English Lexicon defines Elohim (in those Scripture passages where it is a clear reference to deity, as opposed to a goddess or a human judge) as the true God, Yahweh is (the) God. Never does this Hebrew lexicon define Elohim as the Divine. Similarly, nowhere does the TWOT in defining the word Elohim suggest that the Divine could be an appropriate substitute for the title of YHVH, Elohim. So we must ask, why do the two Jewish translations of this passage (noted above) seem to run cross grain to a plethora of other translations, both Jewish and Christian, as well as noted lexicographers to translate it as they do? Is this a case of translation bias? Could translating Elohim panim as Elohim face to face as so many other translators do be a tacit admission that Elohim can appear as a man, hence giving credence to the Christian assertion that Yeshua was Elohim in the flesh? It is interesting to consider this. But before jumping to conclusions, let us examine other passages in the Tanakh where Elohim and man seem to come face to face. How do the Jerwish sages treat these passages? How do their commentaries explain these difficult passages?

What do some leading rabbinic commentaries say on these passages? END_OF_DOCUMENT_TOKEN_TO_BE_REPLACED