I remember that back in the 1990s, according to the Voice of the Martyrs, the number of Christians martyred each year worldwide for their faith was around 50,000. The number is about double that now. Revelation 6:9 describes the fifth seal and the martyrdom of saints in the last days. Revelation 7:14 mentions the great tribulation. Are we living in those days? No matter what, keep watching, praying and preparing for Yeshua’s return! — Natan

© Dipak Kumar / Reuters
Ninety thousand Christians were murdered for their faith around the globe this year, which amounts to one being killed every six minutes, Italy’s CESNUR religious study group said.

Christians are now the most persecuted religious group in the world, Massimo Introvigne, director of the Center for Studies on New Religions (CESNUR), told Vatican Radio.

According to CESNUR statistics, around 500,000 Christians around the globe are unable to practice their faith completely freely, Introvigne said. 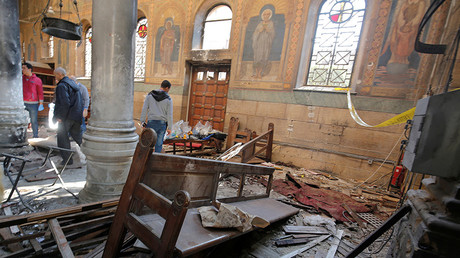 Seventy percent of the killings of Christians in 2016 occurred during tribal conflicts in Africa, he said, referring to data from the Center for the Study of Global Christianity.

The large number of deaths may be explained by the fact that many devoted Christians refuse to take up arms, he added.

The remaining 30 percent, or 27,000, lost their lives in terrorist attacks, the destruction of Christian villages, or persecution by the authorities, Introvigne said.

However, he said that the number of Christian killings has decreased, compared to 105,000 deaths in 2015.

The data in the report may be incomplete as it doesn’t include India and China, where the Christian community survives in secrecy, he added.

The religious study group is due to release the full statistics on Christian persecution in January.

Earlier this year, the Chaldean Bishop of Aleppo, Antoine Audo, said that during the five years of the Syrian conflict, the Christian population of the country had declined from 1.5 million to 500,000.

Revelation 13:1, The beast. The beast of Revelation 13 that rises up out of the sea is the end times New World Order, anti-Christ system comprised of the kings of the earth and their armies (see Rev 19:19). This beast is the political and economic branch of the Babylon the Great New World Order system. The metaphor of the sea is a Hebraism for the seas of humanity. This could be a reference to all the oceans of the earth or just to the Mediterranean Sea. Since all the kings of the earth follows this beast (v. 3), and “all the world” worshipped the dragon who gives authority to the beast (v. 4), it seems that seas is likely a reference to all the seas or oceans of the earth. This beast seems to correspond with the fourth beast of Daniel’s four beast vision (Dan 7:7ff).

Revelation 13:1, Seven heads and ten horns. The seven heads appear to the seven “world”-ruling manifestations of this Babylonian beast down through the ages to the present time (i.e., Babylon one, Egypt, Babylon two, Persia, Greece, Rome and end times Babylon the Great comprised of all nations (the New World Order). The ten horns are likely ten global semiautonomous regional governments, which, when combined, comprise all the nations of the earth and make up Babylon the Great. This may be what Daniel saw in the ten toes of the great image of Daniel 2. Perhaps the two legs of that image represent apostate Christianity and Islam — the two great religions of the world, which are in nearly every nation — united in some way. The two legs could also represent the first Roman Empire and an end times revived Roman Empire that is birthed out of Europe and which becomes the New World Order, which is the head of Babylon the Great. The fourth beast of Daniel’s four beast vision also had ten horns (Dan 7:7). Daniel speaks of a little horn coming up in the midst of the ten horns, which plucked three of the first horns up by the roots (Dan 7:8). This same horn speaks pompously (Dan 7:8, 11) and makes war against the saints (Dan 7:21, 22, 25) and prevails against them until Yeshua destroys it at his second coming (Dan 7:11, 21, 22). John uses similar language to describe the political and economic beast of Revelation 13:1. This beast also makes war against the saints and overcomes them (Rev 13:7).

Revelation 13:2, The dragon gave him his power. This is the ultimate end-times antichrist system.

Revelation 13:7–8, Every tribe, tongue and nation…all who dwell on the earth. Does this beast have authority over every single heathen on earth, and every last heathen on earth will worship him? In the Scriptures, all and every are sometimes used as hyperbole where exaggeration is used to emphasize a point. (For a discussion of this, see notes at 2 Sam 16:22 and Zech 14:2.)

Revelation 13:8, Whose names. This states that some names aren’t written in the Lamb’s Book of Life. This seems to fly in the face of the idea that all humanity’s names are written in the Book of Life, only to be erased when they fail to receive the salvation of the Lamb.

Revelation 13:11, Another beast. This beast is the religious leg of the Babylon the Great New World Order. This beast comes out of the earth (probably the European or Eurasian continent), since this would be the perspective of the John, the writer.

Revelation 13:16, He. This is a reference to the religious beast. It is this beast who causes all humans to take a mark on their head or hand, in order that they might buy or sell. In other words, the religious beast component of Babylon the Great uses its miraculous power and spiritual deceptions to entice humanity to worship the image of the first or political and economic beast (a cloak for Satanic worship). This false religion beast is behind the effort to kill all those who refuse to worship the image of the beast.