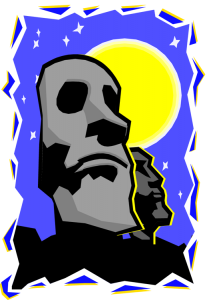 Though the prophet Jeremiah is specifically addressing societal conditions of ancient Israel who had turned away from fully following YHVH Elohim, the main issues still apply to any society, ancient or modern, that forsakes biblical spiritual values for secular and materialistic ones. Down through the ages humans are still driven by the same fleshly passions. Although the theater, costumes and actors may have changed, it is still the same play. Human nature has never changed! When a society fails to learn the lessons of history, it will repeat the same mistakes of the past again and again.

While the name Baal — one of the gods of the ancient biblical Canaanites — may mean nothing to modern people, the Hebrew word baal simply means “lord” or “master.” In modern terms, whatever mores, principles or ideals a society has given itself over to and therefore dominates that society become de facto the lord, master (or Baal) or god of that society.

Human history tends to repeat itself over and over again. What has happened before will happen again, because human nature remains the same. We can learn many valuable lessons from mistakes of those who have preceded us. If we don’t, we will make the same mistakes and suffer the same consequences (judgments) as our forefathers.

YHVH Elohim is every-loving and gracious and he constantly warned his people in biblical times to repent of their sins and turn back to him. He is doing the same thing in our day if we will admit our stubborn pride, humble ourselves, and turn back to obeying his ways that bring healing, peace and eternal life.

In the past, the ancients worshiped concrete images that represented the depraved and dark side of man where physical idols represented the ideas behind Baal worship. Today’s Baal worshipers are more sophisticated. They don’t need the physical idols. They have simply bypassed the idols representing the ideas, and worship the ideas themselves. Just because the concrete images (or literal idols) may have gone by the wayside doesn’t mean the concepts don’t still exist.

Baal worship simply represents the dark and depraved side of human nature. For example, Baal Peor was the god of sexual license, and represented the sexually depraved inclinations of man’s nature. Molech was the Baal of child sacrifice. There’s a Baal for every depravity of man. In America, the sexualization of everything, including the premature sexualization of children, which leads to the act of child sacrifice called abortion is an aspect of Baal Peor, which is perhaps the grossest aspect of society’s bent toward the dark side and depraved side of human nature.

Following Baal is very tempting and seductive, since it appeals to the baser inclinations of men’s depraved nature. Men are naturally attracted to Baal worship. This is why the Bible warns us against it.

What is the appeal of Baal worship? Simply this, it takes a lot of energy to move upward, against the force of gravity. Conversely, it takes no effort to slide downward, since gravity naturally pulls us downward. Baal is like a spiritual gravity that pulls us downward effortlessly. Baal is like descending into the dark and dingy basement of a high-rise apartment building, while the penthouse in the same building is like following the path of God, which leads men upwards. It takes more effort to ascend upward than to descend. In fact, descending requires no effort. One doesn’t have to do anything to descend into the darker abysses of man’s baser nature. It takes a lot of energy, however, to move upward to a place of light and hope. In the Bible, Elohim is leading men upward against his base nature. The worship of Baal is everything that leads men downward against his better nature to fulfill his bodily appetites.

The Bible is the first book in human history that identifies the gods of Baal worship, and tells man to resist the downward pull of his human nature. To adopt YHVH’s way is to move upward. This is why YHVH warns his people through his prophets to fight against the downward slippery slope into the darkness of Baal worship.

Many individuals give lip service to the penthouse, while at the same time they’re really dwelling in the basement. This is the lie that many people find themselves living. They want to move upward, but it takes too much effort, so they stay in the basement, all the while believing themselves to be better off spiritually than they really are. For example, they may want to lose weight and get healthy by exercising and eating healthily, but it takes too much effort to resist the downward pull of the flesh. Add to this that Baal worship in ancient times often occurred on high places or mountain tops giving it the allusion of being in the penthouse, while in reality, it was a basement religion full of evil rites and ceremonies that appealed to the baser nature of man. When humans buy into the lie that Baal worship is a mountaintop experience, they delude themselves away from the reality of their depraved spiritual state.

In biblical times, Israel would even bring aspects (or spiritual trappings) of the penthouse (worship of YHVH) into the basement of Baal worship to give the latter the appearance of the former. The was merely window dressing Baal worship to make it more palatable and acceptable. But it was still Baal worship nonetheless. Though having an appearance or veneer of righteousness, the people had given, in reality, themselves over to the darker practices of Baal worship.

Again, what is the appeal of the Baal? Let’s answer this question with a question. What’s more appealing to the human nature? To serve a god that let’s one do what one wants in accordance with one’s baser nature, or to serve a God who provides one with stringent rules and guidelines to follow where one has to fight one’s base nature and rise above it? To serve Baal is to follow the lusts of the flesh, while to serve the God of the Bible is to have to resist the downward pull and obey his set of rules. To serve Baal is to fulfill the immediate desires of one’s lower nature without thinking about the long term consequences of one’s actions upon oneself, one’s family and society, as opposed to thinking about the long term consequences of resisting the downward pull and choosing the higher path.

An aspect of the downward pull of Baal, worship is to consider the human body of paramount importance. Satisfying its lusts, desires and appetites is a priority. Moreover, that which comes from the body — waste, semen, etc. — is almost sacramental in nature. The bodily functions including defecation and sexual reproductions take on a divine status and is something to be venerated and worshipped,which is why the ancients worshiped the sexual organs and why modern society has such a fascination with sex and is given to vulgarity. The use of profanities relating to excrement and sex in communication and the proliferation of pornography is a manifestation of a society that is sliding into Baal worship. Baalzebub was the god of scatology, which is the preoccupation with dung. This type of preoccupation with the baser nature of man is part of the slippery slope downward that characterizes the worship of Baal.

At the center of Baal worship was Baal-Peor, which was worship that involved obscene sexual rites. The name literally means “lord of the cleft or opening.” Some Bible commentators assert that Baal-Peor refers to degrading sexual rites involving bodily orifices including the worship of human excrement and anal intercourse. Excrement is that which is rejected from the body and is considered disgusting and undgodly. Such was the attribute of the Baalim — the worship of that which is disgusting and degrading by godly and civilized humans. Again, Baalzebub was the god of these disgusting practices. The children of Israelites fell into the worship of this idol (Num 25:3, 5, 18; 31:16; Deut 4:3; Ps 106:28; Hos 9:10).

Baalism also involves the worship of the earth. Earth worshipers believe that man came from the earth and is going back to the earth,which is his mother or god. In Baalism there is nothing beyond this physical life, and therefore, for the worshiper of Baal, life is hopeless, which is why he must indulge the self now, for there is nothing in the future beyond this life to look forward to. The mantra of Baalism, as it also is in Satanism and witchcraft, is “do what thou wilt,” “if it feels good, do it,” or “eat, drink and be merry, for tomorrow we die.”

The Judeo-Christian faith is not only the antidote to Baal, but its main antagonist. No other religious system on earth has ever made war against Baal. The domination of Baal worship in our modern secular society worldwide is evidenced in no greater way than the society’s all out war on anything biblical and Judeo-Christian, while at the same time our society gives a pass to and even promotes every other heathen religious and philosophical system. For Baalism, the more unbiblical, perverse, satanic, sexually deviant the better! The forces of Baal dominates every public institution in America, which is why they’re all engaged in an all out war against every form of Christianity even in its most benign expression. Baalism hates anything biblical.

It’s time that everyone in our society wakes up spiritually and realizes who they have really been worshiping. For most people, it has not been the God of the Bible, the Creator of the Universe, but rather Baal or the devil who is merely an inferior created being. Baal promises much, but lacks the power to deliver on the promise. Serving him leaves one empty, hopeless, destitute and spiritually dead — forever! It’s time to repent of following the lusts of the flesh and start serving YHVH Elohim, the God of the Bible, which leads to a eternal life up in the New Jerusalem, instead of eternal damnation in the bottomless pit of the lake of fire (Rom 1:18–32).

39 thoughts on “Are you a Baal worshiper? Think twice before you answer.”