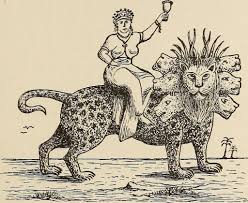 Some people assume that just because a prophetic event has been fulfilled in the past to one people-group it will automatically happen again to another people group in the future simply because “history repeats itself” or because “what has been will be again.” To make these assumptions and apply them to any prophecy runs the risk of succumbing to faulty and illogical reasoning. To read something into a prophecy that is not there is called eisegesis (a subjective view of Scripture) rather than exegesis (an objective view of Scripture). An eisegetical interpretation of Scripture can lead people astray spiritually. It’s called cramming it to fit and painting it to match.

The Bible teachers who make America into Mystery Babylon the Great are guilty of haphazardly cobbling together many scriptures passages pertaining to the historic Babylon of the past (and even Tyre) and then conflating them with the passages in Revelation about end times Babylon the Great. This approach is to interpreting Bible prophecy is what I call “pounding a square peg into and round hole” or c”ramming it to fit and painting it to match.” This is a subjective or eisegetical view of Scripture. This is adding two and two and getting five. By employing this kind of biblical interpretive approach, one can just about make the Bible say anything one wants. This is a misguided, illogical and dangerous approach to biblical interpretation. This is not rightly dividing the Scriptures (2 Tim 2:15)!

Attributes of Mystery Babylon the Great

End times Babylon is worldwide system comprised of three components according to Revelation 13. It is political (Rev 17:3, 7), economic (Rev 17:6–8) and religious (Rev 17:4, 11, 15). This scripture likens this system to a beast and reveals that it’s empowered by Satan himself (Rev 17:1–3). The majority of the world worshipped this beast system and marvelled at it (Rev 17:4). No one could make war with it and succeed; therefore, it has a military component as well that enforces its dictates (Rev 17:4).

Two chapters in Revelation mention end times Babylon by name and describe it. Revelation 17 describes religious or Mystery Babylon, while Revelation 18 describes a commercial (and political) system and calls it simply Babylon the Great. These two systems are related and work together, but are separate though intertwined. Each likely has its own agendas, which is why the commercial side of Babylon the Great will eventually destroy the religious side.

Religious or Mystery Babylon is described as a whore or harlot. It rides a beast (which is commercial Babylon the Great), which will eventually hate and attack this whore and make her desolate (or lay her waste, ruin her, or strip her of her treasures, Rev 17:16).

Revelation 18, which describes commercial Babylon the Great, starts out in verse one by stating, “After these things…” which seems to indicate that either what follows describe subsequent events that will occur or, at least, a change of players and actors or both.

What are the attributes of religious or Mystery Babylon the Great?

Attributes of Commercial Babylon the Great

What are the attributes of commercial Babylon the Great?

YHVH instructs his people to come out of commercial Babylon the Great. One can come out of a city, or a religious system, but it’s a lot harder to come out of an entire country when there are legal obstacles to doing this. For his people to come out of a nation, it must be possible to do so. If America is Babylon the Great, and YHVH’s people are to leave this nation, then where are they to go? To Mexico or Canada? To Israel or Jordan, as people biblical prophecy teachers are suggesting? Good luck! Can can visit some of these places, but it’s difficult if not impossible to live there legally unless you have connections or have a steady outside source of income.

By the time YHVH admonishes his people to exit commercial Babylon, the kings of the earth have destroyed Mystery Babylon the Great, assuming that Revelation 17 and 18 occur chronologically (based on the “after these things” phrase of Rev 18:1).

Commercial Babylon the Great will be destroyed by Yeshua at his second coming (Rev 19).

Though in this discussion we may not have answered the question of who exactly is religious and commercial Babylon the Great, we can see that they are separate but co-dependent entities that have a tenuous relationship.

We have a couple of candidates that we can definitely consider as leaders of Babylon the Great, if nothing else. As of this writing, no other city in the world can claim more religious influence than the Vatican, and no other city can claim more political (and by extension, economic influence) than New York City, which houses the United Nations. To this writer’s thinking, just because these two cities are located in two countries doesn’t mean that Italy and America are Babylon the Great. History shows us that ancient Babylon was a city, and was the capital of an empire called Babylonia. When the city was destroyed, so was the empire. Even though typically, the fate of a country’s major city ends up being the fate, more or less, of the nation that houses that city, this author thinks that it is playing fast and loose with the facts to call America Babylon the Great, and then be urging people to leave the nation just because it has some of the attributes of ancient Babylon. This is spiritual recklessness! Other nations and empires over the millennia have come and gone that could just as easily have fit under the moniker of Babylon the Great according to the criteria that some prophecy teachers have used to label America as Babylon the Great. Such examples include the Roman Empire, the British Empire and maybe even in a certain sense Nazi Germany during the height of its power.

In conclusion, we urge the reader to be careful about getting caught up in the hysteria where prophetic pronouncements are being made by so-called biblical prophecy experts, who are whipping the people up through fear. There is a great tendency among some well known prophecy teachers in the mainstream church and in the Hebrew roots movement to take the day’s news headlines and cram them to fit and paint them to match with the prophecies of the Bible. Over the decades, many of us have watched countless prophecy teachers fail at this activity. So be careful, and don’t believe everything you see or hear. In the mean time, as Yeshua admonished his disciples, watch and pray (Matt 26:41; Mark 13:33; Luke 21:36 cp. Matt 24:42; 25:13; Mark 13:35–37; 14:38).

27 thoughts on “Is America Mystery Babylon the Great?”