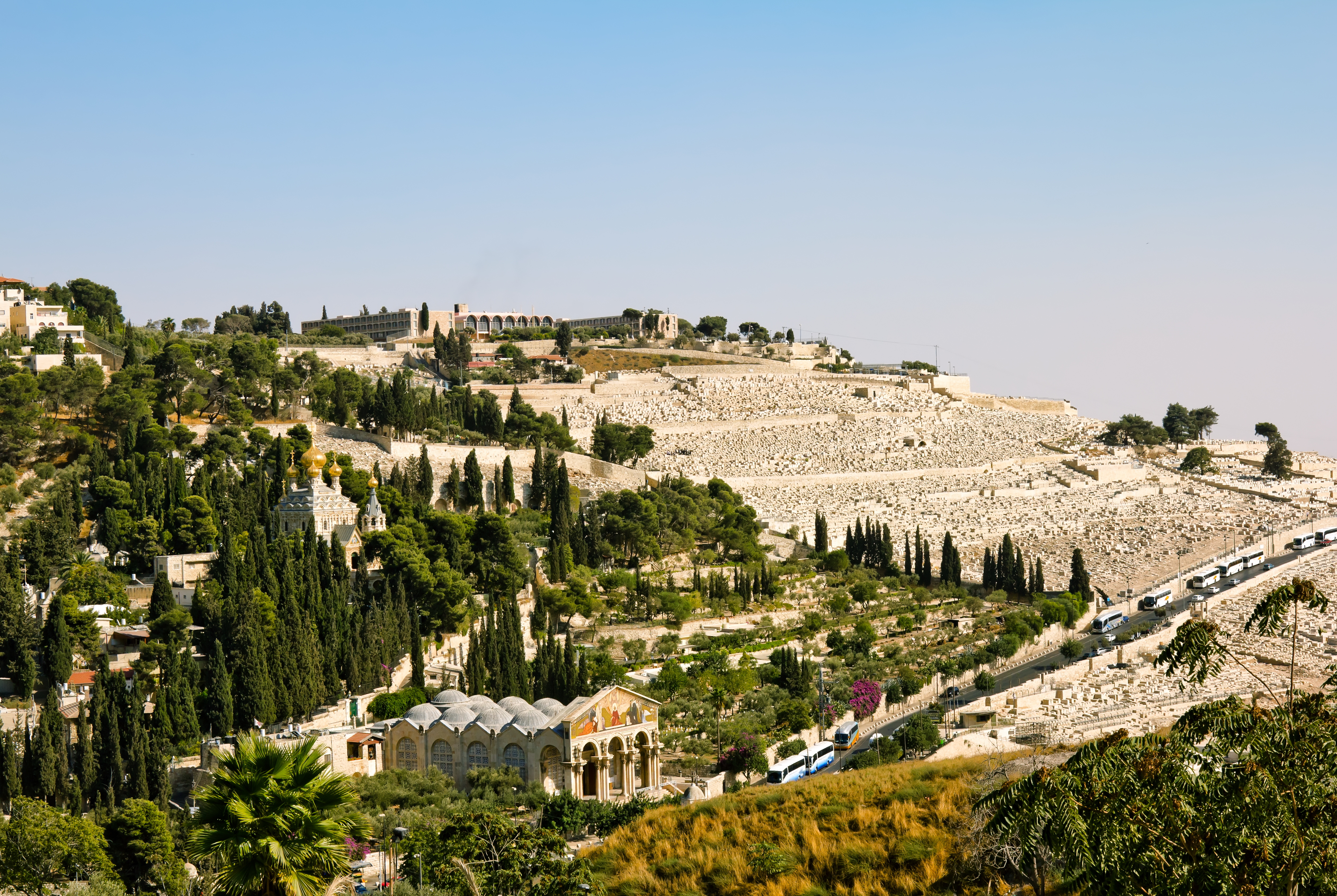 The Mount of Olives in Jerusalem

Matthew 24:29, 30, Sun will be darkened…sign of the Son of Man. Here Yeshua tells us that certain harbingers of his second coming will occur first. These include phenomenon occurring in the heavens involving the sun, moon and the stars. After this, a miraculous sign in the heavens will occur, and then Yeshua will come. Between the signs of the sun, moon and stars and the final miraculous sign of his coming there’s a gap in time. Yeshua later revealed to John the cosmic disturbances involving the sun, moon and stars would correspond with the sixth seal (as part of the of the great tribulation that occurs before Elohim pours out his wrath on the earth) of Revelation 6:12–17. After this, Elohim pours out his wrath upon the earth (Rev 6:17; 11:18; 15:1; 16:1), and then the second advent of Yeshua occurs.

Does the sign of the Son of Man coming (Matt 24:30lp) occur before or after the wrath of Elohim? That’s hard to say, but since Yeshua states that between the two events that all men will mourn, perhaps this is a veiled reference to the wrath of Elohim that is to be poured out on unregenerate men during the seven trumpets, seven thunders and seven bowl judgments described in the Book of Revelation. Why else would men be mourning? The intervening time between the cosmic disturbances (the sixth seal of Rev 6:12–17) and Yeshua’s second coming during which Elohim pours out his wrath could be a year or more, since the Scriptures speak of the day (or a period of time) of YHVH’s wrath. The Hebrew word for day (Heb. yom) can mean both a day and a period of time.

The prophet Isaiah speaks in several places about “the day of YHVH’s vengeance” (or words to this effect). This is the time period when YHVH will judge the nations including Babylon the Great, which occurs at Yeshua’s second coming (see Rev 18 and 19). In three places, Isaiah indicates that the day of YHVH will last for one year (Isa 34:8; 61:2 and 63:4). Interestingly, in Isaiah 63:4, the prophet couples the idea of the day of YHVH’s vengeance being a year long with the jubilee year — “the year of my redeemed has come.” This occurs as the Messiah (the subject of Isa 63:1–6) judges the enemies of Israel (notably Edom) as he is at the same time about to redeem (i.e., regather and return scattered Israel to its Promised Land inheritance). It appears that while Yeshua is judging Israel’s enemies at his second coming, he will at the same time be regathering the lost and scattered 12 tribes of Israel. Yeshua seems to allude to this in Matthew 24:31.

Matthew 24:28, Wherever the carcass is. (Gr. carcass literally, “dead body”) Since eagles feed on live prey, not carrion, some Bible commentators take the reference to eagles to mean any scavenger bird such as a vulture, which can resemble vultures. In Yeshua’s Parable of the Sower (Matt 13:3–9), the birds that came and gathered up the seed that was sown by the wayside metaphorical represent the wicked one (Satan) who steals away the good seed (verse 19). One possible meaning of this enigmatic saying of Yeshua is that as vultures hover over a dead body hoping for a meal, so demonic spirits will hover over the body of Yeshua (i.e. the spiritual body of believers—the congregation of the saints) just before his return waiting to pick off those who are spiritually weak or dead. The righteous being picked off by demonic birds of prey hardly seems like an apt metaphor for the resurrection of the saints, since in the same chapter we learn that the angels will gather in the elect (verse 31), and, as we have already noted elsewhere, Yeshua uses the birds of prey to represent the wicked one (elsewhere called “the prince of the power of the air,” Eph 2:2). Furthermore, Yeshua gives this illustration just after discussing the trials and spiritual delusion of the great tribulation period prior to his second coming when many people will come under the spiritual deception of false prophets and false messiahs (verses 15–27).

Yeshua chose his words carefully when describing the fig tree in his parable. (It helps to know something about fig trees, which as an agriculturalist I have cared for.) He mentions the branches being tender and beginning to put forth its leaves. Like all fruit trees, the fig tree begins to come alive in the spring after winter dormancy. First the buds swell and begin to pop with leaves, and then the fruit begins to form (the flower is actually inside the fruit). As the summer progresses, the leaves and fruit enlarge and the branches harden until harvest time in the fall. Yeshua seems to be describing a fig tree in the early spring. If the weather conditions are conducive and there is a long growing season, a fig tree will produce two crops of figs: one in the mid-summer and another one in the early fall.

To carry this metaphor over with regard to the reunification of the two houses, sticks, trees of Israel (i.e., Ephraim and Judah, as per Ezek 37), could we not say that the Jews (or Judah) returning to the land of Israel in 1948 is like the fig tree in early spring—young and tender, and preparing to bear its first crop of figs. By the time it produces its second crop of fruit in the fall, Ephraim (the Christians) will have been rejoined to the fig tree and the two (Ephraim and Judah) will be like a fig tree ready for harvest. This timing also corresponds with the biblical fall festivals which predict the second coming, which is also when the two houses of Israel will be regathered en masse.

Matthew 24:36, That day and hour. If Yeshua is coming on the Yom Teruah (the Day of Trumpets) to gather his elect, and then touches down to this earth on Yom Kippur (the Day of Atonement), then this begs a question. If the biblical calendar is a calculated one as is the case with the rabbinic Hillel II calendar with the astronomical conjunction calendar, then the day of Yeshua’s second coming could be calculated to the day thus contradicting the words of Yeshua in this verse. However, if the biblical calendar is based on sighting the first sliver of the new moon, then these words of Yeshua would remain true, since no one can predict when the new moon will be visible due to atmospheric conditions which at times obscure the moon from being sighted.