Balaam — A Subverter of Divine Gifts and a Prophet of Babylon 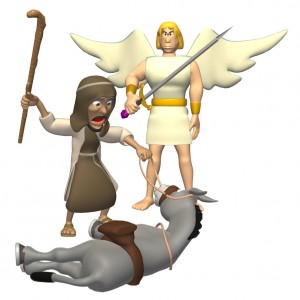 Balaam was from Pethor, a city located on the Northern Euphrates and Tigress Rivers areas called Mesopotamia in modern Syria and including modern Iraq to the south.

Balaam was a soothsayer or diviner (one who foretells or predicts events, Josh 13:22). The ArtScroll Stone Edition Chumash says that Balaam was a sorcerer, necromancer or wizard (one who consults evil spirits) and that the sublime prophecies he uttered over Israel were but temporary aberrations that YHVH granted him for the honor of Israel (Ibid., p. 863). These prophecies also served to glorify YHVH in the eyes of the nations. Other commentators consider Balaam to have been a true prophet of YHVH gone bad. Some consider him to have been a bad prophet going good (i.e. learning obedience to YHVH). Some consider him to have been a false prophet seeking personal fame and fortune who had prophetic abilities that he misused by mixing paganism and the truth of YHVH. This seems to be the Scriptures’ view of Balaam, for 2 Peter 2:15 indicates that Balaam had some knowledge of the truth, but turned away from it loving instead the “wages of unrighteousness.” In the book of Revelation, we learn that Balaam attempted to lead the children away from Elohim and into idolatry. According to the Torah, this makes him a false prophet (Deut 13:5). YHVH commands false prophets to be put to death (Deut 13:5), and indeed, we read of Balaam’s death at the hands of the Israelites in Numbers 31:8.

YHVH used Balaam to instruct Israel in the righteousness of YHVH (Mic 6:5). YHVH can use anyone, even a secular or a false prophet or one’s enemy, to speak his words. YHVH is sovereign, all-powerful and always in control of everything.

The Jewish sages teach that the blessings from Balaam weren’t his, but were rather what YHVH put into his mouth and then drew out with a hook (Talmud Sanhedrin 1056). Jeremiah the prophet says that YHVH’s Word is like fire shut up in one’s bones and that one isn’t released or unburdened from it until it is given.

The Scriptures never paint Balaam in a positive light, but rather as a deceptive, greedy schemer and a very dangerous man (A Torah Commentary For Our Times [ATCFOT], vol 3, p. 70b, Feldman Library, UAHC Press).

The Jewish Torah Commentator Ramban writes that it was YHVH’s intention to use Balaam, a “prophet” of the nations, to bless Israel all along.

There are many comic aspects to the story of Balaam (Ibid., p. 68). YHVH actually mocks this famous, renowned “prophet” of the nations and “prophet” to kings by speaking to him through his ass. This “prophet or seer” could not even see the angel until YHVH opened his eyes. YHVH is always in control and he let Balaam know it in a most curious, humbling and demonstrative way.

The story of Balaam shows the sovereignty of YHVH. He will even use lying spirits to do his bidding (see 2 Chr 18:19–21) or Satan to test and refine the character of a saint (as in the case of Job). Furthermore, he confounds the wise and turns their wisdom into foolishness and lifts up the simple and unlearned (Mic 6:5; 5:7–6:8 for context).

Men in the world want to be like YHVH’s saints and be recipients of the blessings of Israel and some even want to be numbered among YHVH’s chosen, but few want to walk the walk of righteousness required to receive these blessings and privileges. Many will “court YHVH” by getting as close to him as possible without actually crossing over (becoming an Ivrit or Hebrew) and surrendering their all to him. This seems to have been Balaam’s demeanor. However, the sacrifice of laying aside fame and fortune was too great for Balaam to totally commit to obeying YHVH. Balaam could not leave the world and cross over from “Babylon” to Israel.

As YHVH, in love, sometimes denies the prayers of his people, likewise he sometimes grants the desires of the wicked in wrath (to accomplish his agenda that is bigger than them and which they know nothing about, Num 22:15–21).

Imagine the wickedness and foolishness (or arrogance!) of Balaam to think that YHVH would give him a curse against Israel, YHVH’s own people! YHVH, who made the ass to speak, pried out of a stubborn ass of a man words contrary to the man’s heart’s desires, making him to speak a prophetic word in accordance with divine will (Num 23:5, 9–10).

Balaam offered seven sacrifices on seven altars on a mountain high place used for Baal worship. Here we see a blend of the religion of YHVH (offering sacrifices to YHVH on rock altars) and paganism (seven altars instead of one, Num 23:4).

Balaam was desirous of pleasing Balak, even though he pretended to please YHVH. At heart he was a man-pleaser, not a YHVH-pleaser.

The story of Balaam is that of a man who had divine prophetic gifts, but who used these gifts for unrighteous, selfish and materialistic purposes. Though the Scriptures reveal that he heard the voice of YHVH, he was willful and disobedient, and did not fear YHVH enough to walk fully in obedience. False prophets repeatedly plagued ancient Israel, and Yeshua stated that they would be active among his people in the last days (Matt 7:15; 24:11,  24; see also 2 Pet 2:1; 1 John 4:1).

Many people today, like Balaam, have prophetic gifts that they are misusing for personal, unrighteous or misguided purposes. Many such individuals will ply their trade within or on the fringes of the spiritual body of redeemed believers in these end times. Beware of such people!

1 thought on “Beware of Modern-Day Balaams!”