Numbers 21: The Process of Overcoming­—From Sin to Victory and Salvation!

21:4–9, The bronze serpent on the pole is a prophetic picture of salvation at the cross of Yeshua from the sting of death brought on by sin (1 Cor 15:55–57). This is a picture of the believer’s initial salvation. 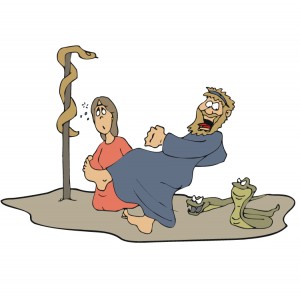 21:10–22:1, Here is a recounting of the Israelites’ wilderness trek before entering the Promised Land. It was a time of testing, refining, building of faith, and learning obedience for the Israelites. This is a picture of the spiritual walk of the believer through the wilderness of this physical life.

21:14–35, While crossing the wilderness, the Israelites had to fight and overcome the enemy—that is, those who would keep them from fulfilling their YHVH-ordained destiny to possess the land and inheritance he had promised them. First comes the fighting and overcoming, followed by the victories. The life of the believer is one of spiritual struggle, as well, against the world, the flesh and the devil. (See Rom 7:14–25; 2 Cor 10:3–5; Eph 6:10–18.)

21:10, 14–18, Here we read how Israel was refreshed with water from the rock. Isaiah speaks about the wells of salvation (Isa 12:3). There is a springing up of joy and praise (verse 17) that comes as victory is experienced, and as YHVH makes rivers to flow out of seemingly dry and barren situations (verse 18). We, too, are called to come to the rivers of salvation, the river of life and to become ourselves a river of life to all those with whom we come into contact (John 7:37–39). Yeshua is the source of that living water; he is the spiritual Rock and source of water that never runs dry (John 4:10, 13–14; 1 Cor 10:4).

Numbers 21:4–9, Fiery serpent. The fiery serpents were a righteous judgment Elohim brought upon Israel for murmuring and unbelief. Israel had “sharpened their tongues like a serpent” (Ps 140:3) and “their throat [was] an open sepulcher; with their tongues have … used deceit; the poison of asps [was] under their lips” (Rom 3:13). All this was directed at Elohim and Moses. They reaped what they had sown. Elohim loosed fiery serpents upon the Israelites to bite and sting to death the unbelieving murmurers.

The wilderness Elohim led them through was full of fiery serpents and scorpions (Deut 8:15), yet this is the only account in the Torah of these creatures ever attacking Israel. YHVH had protected them to this point, and this one time he pulled back his hand of providential protection and grace allowing them to experience the due recompense of their sinful actions. How often has our merciful Father withheld the just desserts of our faithless, rebellious and abominable action against him and gracefully protected us from the full consequences of our sin? If we fail to hear his soft voice of correction he will deal more harshly with us until our attention is gained (Ps 32:8–9). All he has to do is withdraw his hand of protection that restrains the judgments we all deserve and the “fiery serpents” will likewise attack us. Do you remember what happened to Ananias and Sapphira in the book of Acts is an example of this (Acts 5:1–11)? Job experienced a similar situation as well.

Israel’s Murmuring. Israel complained for lack of food and water. In unbelief they concluded and confessed (literally prophesied upon themselves a curse) that they would die in the wilderness. Elohim gave them the fulfillment of their faithless delusions—serpents to sting them and leave them physiologically in a parched and burning condition. (The poison of these snakes actually leaves the victim burning with a fiery pain in his body and a desperately dry and thirsty condition [See Adam Clarke’s Commentary, vol. 1, p. 684]). This occurred with the quail also. They complained with their mouths and lusted for meat and Elohim gave them so much quail that it “came out of their nostrils” (Num 11:20). Many were struck dead in judgment. What is the lesson of this story? That for which we lust or that which we fear will come upon us, for Elohim allows those very things to rise up, attack us and judge us. Why? So that the false gods of our hearts will be exposed and we will, as a result, see the error of our ways, repent and turn back to obedient faith to the one true Elohim. Few understand this method of operation of Elohim, but the Scriptures reveals this as one of the ways he deals with his people to help them to grow up spiritually.

Salvation. Israel repented and received salvation from the sting of death by looking upward toward the brass or bronze (bronze representing judgment) serpent on the pole. Of course, no less than Yeshua himself reveals to us that this serpent is a pictures himself dying on the tree as a sin offering and source of our salvation (John 3:14 and 12:32).

Even the Jewish sages admit that the serpent did not heal the afflicted Israelites, but looking upward unto heaven granted them salvation and healing. (See Wisdom 16:4–12)

Parallels between the bronze serpent and Yeshua:

Both the serpent and Messiah were lifted up on a pole.

YHVH provided salvation from the sting of death from no other source but the serpent. Similarly, there is salvation in no other name but Yeshua (Acts 4:12).

If the Israelites looked at bronze serpent they were healed and lived; if sinful man looks at Messiah he will live.

Both the serpent and the cross are merely symbols of Elohim’s grace and mercy. They simply point one to YHVH in heaven who heals those who believe him and have faith in him.

A Type of the Devil. The Bible calls the devil a great red dragon or serpent (Rev 12:3) whose venom inflames men’s sinful passions through his fiery darts aimed at humans (Eph 6:16). Fiery serpent is the Hebrew word saraph the plural of which is seraphim, which is a type of an angelic, flaming spirit (Heb 1:7). Though physical snakes bit the Israelites, this is nevertheless a picture of Satan, the fallen angelic being who is now the serpent and enemy of both YHVH and man.

For Our Example. Israel experienced these things for our examples (1 Cor 10:1–12). What they went through and how they reacted to various situations is literally a mirror held up for our benefit for us to see ourselves as we really are, so that we will not repeat their mistakes. We owe them a debt of gratitude, for we are able to gain spiritually by their experience if we will lean from their mistakes by not repeating them.