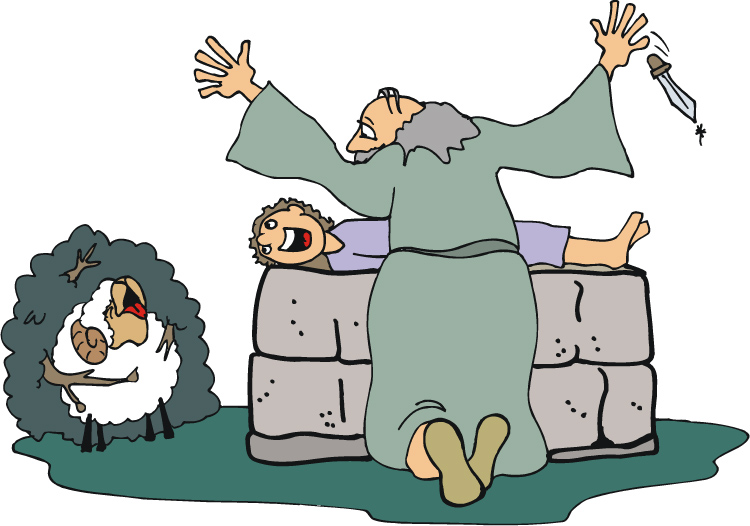 Genesis 22:13, A ram caught in a thicket by his horns. YHVH credited to Abraham’s spiritual account his willingness to sacrifice Isaac as if he had actually done so. In fact, there is an ancient rabbinical tradition that states Isaac actually died and was resurrected as the midrash comments on this passage: “As the knife reached his throat, Isaac’s soul flew away and left [e.g., he died]. But when a voice went forth from between the angels saying, ‘Do not stretch out your hand against the lad’ (Genesis 22:12), his soul returned to his body” (Pirkei DeRabbi Eliezer 31 as quoted in The ArtScroll Davis Edition Baal HaTurim Chumash Bamidbar, p. 1417) (bracketed comments are in the original). The Jewish sages also note that Scripture states that both Abraham and Isaac ascended the mountain, but that it is recorded that only Abraham descended (Gen 22:19). Isaac’s absence from the Genesis narrative until many years latter (Gen 24:62) has given rise to much speculation on the part of the sages as to Isaac’s whereabouts in the interim (The ArtScroll Bereishis Vol. 1a, pp. 812–813).

Regardless of the rabbinic interpretations, does Scripture leave Isaac out of the narrative as if to highlight his absence, and to give the impression (albeit a prophetic allegorical one) that he was actually sacrificed? After all, what was the ram caught in the thorn bush thicket (wearing a crown of thorns) by its two horns all about? That ram is understood by many to be a substitute sacrifice prophetically picturing Yeshua the Messiah much later dying on the cross while wearing a crown of thorns.

Moreover, who was it that commanded Abraham to lay down the knife and slaughter the ram instead? It was the Messenger (Heb. malak) of YHVH (verses 11–12, 15), who was none other than the pre-incarnate YHVH-Yeshua, the Word or Messenger of Elohim (John 1:1, 14), whose audible voice Abraham heard some 1900 years before his appearance as the Messiah in human form on earth as the Lamb of Elohim slain from the foundation of the earth.

The Messenger of YHVH at the Binding of Isaac

11 And the Messenger/Malak of YHVH called unto him out of heaven, and said, Abraham, Abraham: and he said, Here am I … 15 And the Messenger/Malak of YHVH called unto Abraham out of heaven the second time, 16 And said, By myself have I sworn, saith YHVH, for because thou hast done this thing, and hast not withheld thy son, thine only son: 17 That in blessing I will bless thee, and in multiplying I will multiply thy seed as the stars of the heaven.

In this passage, there is no mention of the Messenger of YHVH visibly appearing to Abraham in some bodily form, but only his voice calling from heaven. What we want to emphasize in this passage is that the Messenger of YHVH is equating himself with YHVH (verse 16). The biblical passages where the Malak of YHVH equates himself with YHVH while appearing in human form have perennially defied reasonable explanation by the Jewish sages.

Notwithstanding, the ancient Targum Jerusalem (the pre-Christian Aramaic translation of the Hebrew Scriptures) equates the Malak of YHVH with “the Word of Elohim” in verse eight implying that YHVH and the Word of YHVH are in some way different from each other:

And Abraham said, The Word of Elohim will prepare for me a lamb; and if not, then thou art the offering, my son! And they went both of them together with a contrite heart.

Some Jewish sages asserts that “the angel speaks in God’s name, in first person” while others maintain that it was “God Himself who opened the heavens and addressed Abraham’ (The ArtScroll Bereishis/Genesis Commentary, p. 808). If the latter is true, than the Malak of Elohim/YHVH here is none other than Elohim himself. And logically, if he is Elohim here, then he must be Elohim/YHVH in the other passages where he is mentioned. And if Elohim can appear in human form, speak to men and eat with them (as in Genesis 18) then the question must be asked: why can’t YHVH appear in human form as the Messiah; namely, Yeshua the Messiah? After all, in Proverbs 30:4 (a passage we will discuss at length later) we read,

Who hath ascended up into heaven, or descended? who hath gathered the wind in his fists? who hath bound the waters in a garment? who hath established all the ends of the earth? what is his name, and what is his son’s name, if thou canst tell? (KJV) (emphasis added)

Additionally, in Isaiah 53, a passage recognized by both Jewish and Christian scholars as referring to Messiah verse one states,

Who hath believed our report? and to whom is the arm of YHVH revealed?

Here, the Messiah is called “the Arm of YHVH.” Is the Malak of YHVH/Elohim this “Arm of YHVH” who does the earthly bidding of the One in heaven and who acts as the intermediary between Elohim and man? We believe so.

The Three Ram’s Horns or Trumpets in the Bible

The ram’s horn shofar or trumpet is colloquially symbolic of the Jewish people, but beyond this traditional concept, the Scriptures speak specifically of three trumpet or ram’s horn blasts: the first, the last and the great blast. These have great spiritual and prophetic significance, which we will now explore.

The first and last trumpets relate to the two horns of the ram caught in the thicket on Mount Moriah. The ram prophetically represents Yeshua the Sacrificial Lamb, who would die for man’s sins on the tree on the same mountain some 1,900 years after the binding of Isaac.

What does the thicket in which the two ram’s horns or shofars were caught represent spiritually (Gen 22:13)? From one end to the other, the Bible employes word pictures, symbols and metaphors to teach deep spiritual truths. The thicket is a symbolic picture of humanity, which is entangled in the brambles of sin from which it needs to be freed. Yeshua the Messiah is the Lamb (or ram) slain from the foundation of the world (Rev 13:8), who, while hanging on the cross, wore a crown of brambles or thorns. Elsewhere, the Scriptures say that the sins of man were laid upon Yeshua (Isa 53:6). The crown of thorns is a symbolic picture of this. Furthermore, in Matthew 13, in Yeshua’s Parable of the Sower, we see that some of the good seed of the gospel message was cast into the thorns, which Yeshua explained represents the cares of this world and the deceitfulness of riches that choke out the word of YHVH. These references to thorns and thicket are also a picture of sin. The wages of sin is death.

In Genesis 22, Isaac was about to die, but the ram caught in the thicket that YHVH provided was a prophetic picture of Yeshua (a Hebrew word meaning “salvation”) that became a substitute sacrifice for Isaac. Isaac was set free and the ram was sacrificed instead. This ram was a prophetic picture of Yeshua’s substitutionary death on the cross for man’s sins.

Both of the ram’s horns were caught in the thicket. In Hebraic thought and prophetically-speaking, the left horn of the ram signifies mercy and grace and is the feminine side of Elohim. Remember, Elohim has both a both male and female side (Gen 1:27; 5:2).The left hand of Elohim symbolically is the weaker hand of YHVH, which symbolizes grace and mercy. This left horn prophetically points to the first coming of Messiah Yeshua as the Suffering Savior, as one bringing mercy and grace, and who refused to quench a smoking flax or breaking a bruised reed as a meek and quiet lamb going to its slaughter (Matt 12:20; John 12:47; Isa 53:7).

The right horn of the ram caught in the thicket represents the stronger right hand of Elohim or the might of his judgment (Ps 89:10, 13–14), after his mercy and grace have been exhausted and men have failed to repent of their sins. Thus, this horn prophetically points to the second coming of Messiah, who is currently seated at the right hand of the Father (Acts 2:32–33), and who will come to the earth, the second time, in power as King of kings to rule with a rod of iron and to judge the living and the dead, and to destroy all his enemies (Rev 17:14; 19:15).

Earlier, we mentioned three trumpet or shofar blasts. The Scriptures record that humans first heard the blast of the heavenly shofar when they received the ten commandments from Elohim at Mount Sinai (Exod 19:19).The left horn of the ram caught in the thicket also points prophetically the first trumpet that was sounded presumably on Shavuot (or the Feast of Weeks or Pentecost) representing YHVH’s grace and mercy upon his people from Abraham until the Yeshua’s second coming—a time for his people to repent from sin (the violation of Elohim’s Torah-law, 1 John 3:4) and return to him walking in righteousness or Torah-obedience (John 14:15).

The second or last trumpet blast in Hebraic thought occurs on Yom Teruah, the Day of Trumpets, which is the first fall biblical holiday. On this day, the Scriptures command that rams horn shofars be blown (Lev 23:23–25). This prophetically pictures the resurrection of the righteous dead at the last trumpet blast at Yeshua’s second coming (1 Cor 15:52; 1 Thess 4:16).

Finally, the great or final shofar blast occurs on Yom Kippur or the Day of Atonement ten days after the Day of Trumpets. This prophetically pictures Yeshua returning to the earth with his glorified, resurrected saints on a jubilee year (Rev 19:1). It was on Yom Kippur that the Bible commanded the jubilee trumpet to be sounded (Lev 25:9). Also on this day all slaves and captives were set free, debts were forgiven and the land returned to its previous, rightful owners. In the future on this day, if our understanding is correct, Yeshua, at his second coming, will destroy the Babylon the Great New World Order Antichrist System, Satan will be put into the bottomless pit, Yeshua will establish his millennial kingdom on this earth, and humanity will be free to hear the gospel and turn to Yeshua (Rev 19:1–3, see chapters 18–20 for context).

One final thought. In Genesis 22:4 we read that Abraham saw the “place” (i.e. Mount Moriah) afar off “on the third day.” This is scriptural prophetic code for something significant. Mount Moriah was the place of Messiah’s crucifixion. Abraham saw, by faith, the place and work of Yeshua’s death afar off. The phrase “on the third day” signifies two things. First, a day in Scripture and in Jewish thought, in this instance, symbolizes 1000 years (2 Pet 3:8), and so it may represent the third one-thousand-year period from the time of Abraham (ca. 1872 B.C.). Messiah would come as the sacrificial Lamb in three days or in the third millennia from Abraham’s time. Yeshua was born and died in the first millennia A.D., or the third millennia from Abraham. Second, the phrase, “third day” can represent the time or millennia of Messiah’s second coming as well.