The use of trees or wooden poles as an object of worship in the ancient world was universal as a fertility or phallic symbol.  In many places, the Bible strongly condemns involvement with this pagan custom.  Obviously the tree of Jeremiah 10:1–5 is not a Christmas tree, since Christmas as we know it didn’t enter into Christianity until about the late fifth century AD. However, the pagan implications of the Christmas tree are clear as evidenced by history, which is why it was outlawed by the Puritans and many other religious groups in America in the 1700s. It was not until the 1850s with many Germans migrating to America with their Christmas tree tradition that Christmas became popularized again in this country. 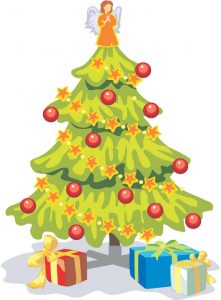 Often our view of the Scriptures is filtered through our emotions. We all struggle with this spiritual disease. When we’re extremely partial to a belief or an idea, we have a hard time conforming our lives to those biblical scriptures that disagree with us. Thus, we have a spiritual blind spot. For many, Christmas has become a spiritual blind spot because it is so ingrained in our families and the culture. It is perhaps the hardest thing for people to let go of because of family and emotional ties. Each of us has to make the choice: do we love the praises of family or the praises of Elohim more (John 12:43)?

Jeremiah 10:1–5 is the perfect description of what has come to be known as a Christmas tree. The Word of Elohim says don’t do it. This is fact. I didn’t make it up, I just read it and believe it. Further, Jeremiah 10 isn’t a stand alone scripture. When this passage is placed against the backdrop of the heathen practices of the Gentile cultures around ancient Israel, and against the Bible’s repeated prohibitions against (a) Israel’s adopting pagan religious practices of any kind, and (b) more specifically, not bringing into Israel the worship of the pagan fertility symbols of which the tree was a central object, YHVH’s prohibition against the Jeremiah 10 tree was much wider and broader implications. Basically, YHVH says “don’t do it,” and for the serious follower of Yeshua, that should settle the issue. YHVH is searching for a people to be his own who have of a contrite heart and who tremble before (i.e., obey) his word (Isa 66:2).

As opposed to Christmas, Elohim has given us seven biblical feasts that we can do that will bring glory and honor to him. Let’s practice and rejoice in what he has given us.

For the record, I don’t view the celebration of Christmas or putting up a Christmas tree as a cardinal sin. Christmas is the one time of the year the world chooses to focus on Yeshua. Halleluyah! May it cause many people to turn to him. Remember what Paul said about Yeshua being lifted up even under questionable circumstances?

Some indeed preach Christ even of envy and strife; and some also of good will: The one preach Christ of contention, not sincerely, supposing to add affliction to my bonds: but the other of love, knowing that I am set for the defence of the gospel. What then? Notwithstanding, every way, whether in pretence, or in truth, Christ is preached; and I therein do rejoice, yea, and will rejoice. (Phil 1:15–18)

Most well-informed individuals know that Yeshua wasn’t born in December, and that the pagans had festivals at the winter solstice to celebrate the rebirth of their pagan sun gods.

I for one don’t lament Christmas (I do lament the pagan practices associated with the celebration of Yeshua’s birth, though). I just don’t practice it, although I certainly affirm and rejoice in our Savior’s birth. Actually he was born in the fall about the time of the biblical festival of the Feast of  Tabernacles (or Sukkot in Hebrew). There is ample biblical proof to confirm this, but this will be for another discussion.

8 thoughts on “The Christmas Tree in Jeremiah 10”