This year there has been some confusion as to whether the barley in the land of Israel was really aviv (or abib) or not. Some aviv barley search groups say yes, and some say no. Why the confusion, and who is right? Eventually each person has to make up their own mind, but below we will present the reasons why we agree with those who say that the barley isn’t aviv yet.

At this point, some of you may be saying, “Huh?” when it comes to the term aviv barley. What is aviv barley and what does that have to do with anything that pertains to me? So let’s quickly review some basic truths regarding the biblical calendar. It all has to do with when to keep the biblical feasts.

On our modern Roman calendar, determining new year’s day each year easy to do. But this is not the case with the biblical calendar. This is why. The Roman calendar is based on the solar cycle, which is 365 1/4 days long. By contrast, the biblical calendar is a luni-solar calendar. This means it’s based on the solar cycle AND the lunar cycle. The latter is only 354 days long, or roughly 11 days shorter than the solar cycle. The biblical feast go off the lunar cycle, not the solar cycle. This means that if you base your year only on the lunar cycle, each lunar year will fall behind the solar cycle 11 days. In three years, that will be 33 days or a little more than a month. That being the case, eventually, this will move the biblical feasts backwards with respect to the solar calendar and the seasons. That means that in three years, we would be keeping Passover a month earlier, or in the winter and not in the spring. In a number of years, Passover would occur in December, then in the fall, and then in the summer, and in a few decades, we’d be back in the spring again. This cannot be, since the Torah declares that the feasts must fall “in their seasons” (KJV) or “at their appointed times” (NKJV) (Lev 23:4). They can’t fall outside their appointed seasons. There are deep spiritual or theologically reasons for this, but we’ll save that for another discussion.

Now how do we know when to add a thirteenth month? Well, the Bible doesn’t just spell it out in Greek-thinking logic like a mathematical equation. As with most biblical subjects that reflect Hebrew logic, we have to search the Scriptures for the answers and then put the pieces of the puzzle together. The same is true when figuring out issues pertaining to the biblical calendar including when the new year begins and when to add a thirteenth month.

We won’t go into much detail here, since this is a brief summary or overview of the subject. (Again, for the details, see the link above to my articles on the biblical calendar at http://www.hoshanarabbah.org/teaching.html#feast.) Suffice it to say, the ancient (now wild-growing) barley in the land of Israel is the factor that determines whether to add a thirteenth month or not. In fact, the first month of the biblical calendar is called the month of the aviv (or abib, see Exod 13:4; 23:15), which is a technical agricultural term relating to the state of maturation the barley grain is in at the time of the new year. 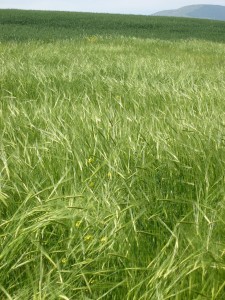 Barley is the first grain crop to come ripe in the land of Israel in the early spring, and typically it comes ripe before the wheat harvest occurs in the late spring during the time of the biblical Feast of Weeks or Pentecost.

For the first month of the biblical calendar to be called the month of the aviv, the barley must be in the aviv state of maturation. This means that the barley grain is at the least parchable or it can roasted over a fire to make it grindable.

So in the biblical calendar, if we come to the end of the twelfth month, it is necessary to go searching through the land of Israel for aviv barley. If you find it in sufficient quantities, then this marks the beginning of the first month of the new year. If you don’t find it in sufficient quantities, then you add a thirteenth month onto the end of the current year. Again, roughly every three years, a thirteenth month must be added to the biblical calendar to keep the lunar calendar (which the biblical feasts are based on) in sync with the solar calendar (which the year is based on).

If one finds aviv barley, how much aviv barley is enough? There must be enough to make a sheaf or an omer’s worth of grain, which is a biblical measuring unit equal to about two liters. Why this amount? This is because the Torah commanded the priests to offer up an omer of barley grain on the Day of First Fruits (called the omer or first fruits offering) during the Feast of Unleavened Bread that falls during the second half of the first month of biblical calendar (Lev 23:9–14). So finding a few stalks of aviv barley in a field is not sufficient. There must be enough to make two liters worth of flour.

Now at this point in the discussion some well-meaning, Torah-pursuant people will disagree about the need to find a full omer-amount of barley on the first day of the new month. Say, for example, you find only a few stalks of aviv barley, but not enough to make an omer, won’t there be enough barley that will have ripened within two to three weeks to make an omer for the first fruits offering? Maybe, but we don’t know for certain. It’s speculation to say yes. Those who say yes are speculating that weather conditions will be such that there will be enough aviv barley to make an omer offering in time for First Fruits Day. But what if the weather suddenly turns cold, or cloudy and the barley doesn’t ripen in time after you have declared the new year? What then? What if you have declared the new year based on finding only a few stalks of aviv barley, but not enough to make an omer and all Israel is now preparing to keep the Passover and the Feast of Unleavened Bread? Each family is separating out their Passover lamb on the tenth day of the first month in preparation for slaughtering it on the fourteenth day on Passover as the Torah commands. Moreover, people are making plans to travel to Jerusalem or wherever YHVH has chosen to place his name in Israel in order to keep the Passover and Unleavened Bread as the Torah mandates. What happens if, after all of this, there isn’t sufficient barley for an omer offering because the weather conditions in the land of Israel weren’t conducive for the barley to ripen? You have just thrown the whole nation of Israel into chaos. Thousands of lambs that were separated for the Passover sacrifice now have to be put back into the flock and travel plans have to be postponed for a month. All the temple preparations have to be put on hold, and all the plans that the priests and Levites have made as they were preparing to officiate at the spring feasts now have to be put on hold. The thousands of lambs that were brought to Jerusalem and sold by merchants to the Jewish pilgrims who were coming there to celebrate the feast now have to be returned to their pastures or stalled and fed for an extra month. Moreover, in ancient times people traveled by foot, and it took days to get somewhere and provisions had to be stored and transported, so postponing a trip wasn’t easy to do. Though these issues aren’t factors for modern man, they were issues when the Tanakh (Old Testament) was written, and this is the cultural context in which we are to understand the Torah’s commands. If we try to understand and apply scriptural truths outside of this context, we run the risk of coming up with a false hermeneutic and twisting the Scriptures anyway we want. It is this wrong approach to interpreting Scripture that has led the church (and rabbinic Judaism) to the place it is today with all of its unbiblical and manmade doctrines and traditions. This is something we are trying to get away from. We don’t want to leave behind the lies of the church (and rabbinic Judaism) in pursuit of biblical truth only to create our own unbiblical lies and traditions!

For these reasons, we have chosen the more cautious, less speculative approach that involves finding sufficient aviv barley to make an omer by the first of the month, rather than speculating what might be in two or three weeks.

As more and more people are returning to the ancient paths of YHVH’s Torah, people are wanting to follow the biblical calendar instead of unbiblical manmade calendars such as the current calendar of rabbinic Judaism. This means that many people are now going out and searching for barley in the land of Israel. This is good. However, as with everything, there are differing opinions on a lot of issues. This is the case in 2016.

Now let’s get specific. One group led by Nehemiah Gordon and his band of Karaite Jews and Messianics are saying that the barley wasn’t aviv this year and are proclaiming a leap year (or adding a thirteenth). Here is a link to his Facebook page (http://www.nehemiaswall.com).

On the other hand, another group is stating that they found a small quantity of aviv barley in Israel and are speculating that sufficient quantities of barley will be aviv in two or three weeks for an omer offering. (You can read his search report at http://www.eliyah.com/Convery-aviv.pdf).

Another group admits that they didn’t find aviv barley, but is speculating that there will be sufficient quantities of aviv barley in time for the omer offering in several weeks. (You can read his search report at http://www.eliyah.com/Convery-aviv.pdf).

That’s up to you to decide.

For the reasons stated above, we have chosen the more cautious and less speculative approach of Nehemiah Gordon and the Karaite Jews, and are looking for sufficient quantities of aviv barley at the start of the new near and well before the omer offering. Other groups will take the more speculative and risky approach and declare that there will be an omer’s worth of barley somewhere in the land of Israel in time for the omer offering. And they may be right. But who knows for sure until it happens? What if it doesn’t happen after they have already declared the new year? Then what?

Both sides of the issues have their valid arguments, but we have chosen the more cautious approach over the more speculative one.

Now let’s compare this passage to a more detailed instruction found earlier in the Torah and one which is more specific to First Fruits Day.

Speak to the children of Israel, and say to them: ‘When you come into the land which I give to you, and reap its harvest, then you shall bring a sheaf of the firstfruits of your harvest to the priest. ‘He shall wave the sheaf before YHVH, to be accepted on your behalf; on the day after the Sabbath the priest shall wave it. And you shall offer on that day, when you wave the sheaf, a male lamb of the first year, without blemish, as a burnt offering to YHVH.’ (Lev 23:10–12)

Since the Leviticus 23:10–12 passage is the primary command pertaining to First Fruits Day and gives us more specific information and occurs prior to the Deuteronomy 16:9 passage, basic rules of biblical interpretation (or hermeneutics) require use to interpret the latter passage in light of the former passage and not vice versa.

34 thoughts on “Is There Aviv Barley in the Land of Israel Now…or Not?”