The Goat and Sheep Nations Judgment

Matthew 25:31–46 describes Yeshua’s judgment of the sheep and goat nations. Some see this event as occurring at the beginning of the Millennium. Others see it as a process culminating at the end of the Millennium with the release of Satan from his bottomless pit prison after which he will tempt the nations to rebel against King Yeshua. The last scenario seems unlikely, since those who follow Satan’s rebellion will receive immediate judgment upon arriving at Jerusalem to confront Yeshua. They will be devoured by fire out of heaven (Rev 20:9). No mention is made in this passage of a judgment between the sheep and goat nations. There’s only swift judgment upon Gog and Magog. 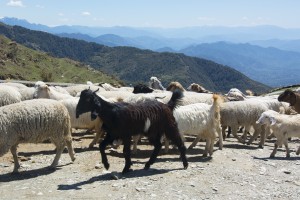 It seems likely, therefore, that one of first orders of Yeshua’s official business upon his return to the earth will be to judge between the sheep and goats. Here he will separate the wicked from the righteous who have survived the wrath of Elohim at the end of the age just prior to Yeshua’s second coming. This is like a mop-up operation after a great war. Those who have shown kindness to the saints will be allowed into the kingdom of Elohim during the Millennium, while those who didn’t will be cast into the lake of fire. This appears to be an initial purging of the spiritual wheat from the chaff at the beginning of Yeshua’s millennial reign. Those who are left are presumably those who didn’t take the mark of the beast and hence won’t be destroyed with those who did (Rev 19:20). They showed their faith by their actions, and King Yeshua’s grace will be extended to them and he will give them an opportunity to receive eternal life. Perhaps these are those who are implied in Revelation 16:2 who refuse to take the mark of the beast and worship him during the wrath of Elohim period.

Some Bible teachers view the judgment of the nations not as a one-time event that occurs at the beginning of Yeshua’s millennial reign, but as an on-going process during his reign. This could be the case, since Yeshua may give the nations time to accept his rule and learn the truth of the gospel little-by-little.

Whether those of the goat nations will be cast immediately into the lake of fire isn’t clear. The lake of fire is mentioned in Revelation 20 at the end of the Millennium and in conjunction with the white throne judgment. Perhaps Yeshua will allow the goats to remain on the earth, and they will be those rebels he will be forced to rule over with his rod of iron, and who will refuse to come up to keep the Feast of Tabernacles in Jerusalem annually. Perhaps they’re the ones who will eventually be deceived into rebelling against Yeshua at the end of the Millennium when the devil is released from the pit (Rev 20:7–10).