Lot had a lot, and cast in his lot with the lot of them and ended up losing a lot.

Is Lot a picture of the typical modern born-again believer whether Christian or Messianic? I believe so. In saying this, as a pastor and having been a watchman on the spiritual wall for many years, I see very little if any differentiation (broadly speaking) between Christians and most Messianics, for the spiritual condition of both groups is fundamentally the same. 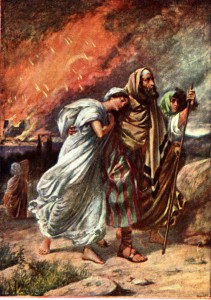 Primarily what differentiates the two groups is the religious jargons and nomenclatures each group uses in addition to the outward religious trapping or externals each uses to identify itself. What about Torah, you may ask? Don’t Messianics obey the Torah and Christians do not? My response is that there is not a huge difference between the two—at least not from the Creator’s perspective. YHVH looks at hearts, and not merely the superficiality of outward appearances and the religious trappings by which people identify themselves.

In reality, both born-again Christians and born-again Messianics follow Torah principles to one degree or another. The only difference is that the former group does not claim to follow Torah, but teaches that it was “done away with.” In reality, to a certain degree, many serious Christians do follow the “moral” principles of the Torah along with tithing. On the other hand, a majority of Messianics profess loudly and proudly their Torah-obedience, but largely, in practice (except for an often half-hearted adherence to the observance of the Sabbath, the biblical feasts and the biblical dietary laws) they don’t. If so, they do so only in a way that is copacetic and convenient to the secular, post-Christian society and lifestyle to which all Westerners have become addicted. In addition, many Messianics have fallen victim to a more diminished view of Yeshua in favor of a more letter-of-the-law (or Torah-legalistic) approach to their religious expression. An over-emphasis on the letter of the law as opposed to the spirit of the law is something that Paul the apostle loudly decried, but it seems that many Messianics have failed to heed the apostle’s warning.

This mentality of spiritual compromise and syncretism with the world or accommodation (as Francis Schaeffer termed it when describing the secular humanistic bent of the modern Christian church) fits Lot to a tee, as we shall see below. Spiritually, Lot typifies most Christians and Messianics on earth today in these last days.

In analyzing this subject, we must realize that the Creator looks more at the condition of the human heart, than the externals and trappings of one’s religious expressions. Within both Christian and Messianic groups there are those who “draw near with their mouths, but their hearts are far from [YHVH]” (Isa 29:13 cp. Matt 15:7–9). For these reasons, I see both religious groups to be fundamentally the same and, therefore, not unlike Lot, our biblical character of the day.

In his Olivette Discourse, Yeshua warned us that as it was in the days of Noah and Lot, so it would be in the day of his return. He then left us with this well-known but somewhat arcane warning, “Remember Lot’s wife!” (Luke 17:32). Despite Lot’s failings, Scripture’s last verdict concerning Lot’s spiritual state is that he was a just or righteous man who was vexed or oppressed by the wickedness of the society in which he found himself (2 Pet 2:7). I believe that this is an apt description of the average redeemed believer of the last days be they Christian, Messianic Jewish, Messianic Israelite, Hebrew roots Christian, Christian Zionist, Jewish Christian, Nazarene, Notzrim or any other spiritual designer label you care to choose.

Despite Lot’s predisposition toward selfishness, greed, or seeking the approval of the world, his attempts to appease evil doers by compromising his morals (the old go-along-to-get-along-mentality), and his reluctance to leave a wicked society even at risk of peril to his life and those of his loved ones, YHVH still considered Lot to be a righteous man worthy of divine favor and grace such that YHVH sent heavenly messengers to lead Lot and his family to safety. If Lot is an example of the typical modern Laodicean believer, then there is hope for us all in light of YHVH’s merciful grace toward Lot! Remember Peter’s declaration about how the righteous are scarcely saved (1 Pet 4:18)?

We can learn an important principle from the example of Lot. It is this. Although the Bible calls him righteous, this is not the case with his wife and children. Although this is speculation, it seems that Lot likely married a daughter of Sodom, which is why he was granted a seat (a place of judicial authority) in the gate of that city. If this is so, this perhaps answers the question why Lot’s other sons and daughters found it impossible to leave Sodom, and why Lot’s wife left that city only reluctantly. In reality, her heart was still there, which is why she suffered YHVH’s judgment. Many modern believers are like Lot’s wife and children—they are too much in love with the world. Many will be judged as per Revelation 18:4 because they refused to leave end-times Babylon.

In Deuteronomy 32, the Song of Moses, which is a prophecy concerning what would become of Israel after the death of Moses all the way down to the end of the age (or “Israel’s latter end, Deut 32:29), Moses likens Israel to Sodom and Gomorrah (verse 32). Moreover, the spirit of Sodom is alive and well in the end times, for in the Book of Revelation, Jerusalem spiritually is likened to Sodom (Rev 11:8).

A Brief Commentary on Lot’s Life

Lot still longed for the good life of wealth, materialism, fame and the acceptance the world had to offer him. He was still a selfish, self-centered man who had not died to his carnal self and its fleshly, worldly appetites. It was all about him, which is why he could “shaft” Abraham—the one who had led him spiritually and physically to the Promised Land—by choosing the better (more productive and prosperous) area of Canaan to enrich himself. That step of selfish compromise revealed the true intent of his heart. Sodom was the closest thing to Babylon Lot could find in Canaan, and he gravitated in that direction.

Abraham represents the uncompromising redeemed believer; Lot the compromised, carnally-minded believer. They represent two spiritual systems that co-exist simultaneously. One is the faithful church of Philadelphia with which Yeshua could find no fault. The other was the lukewarm church of Laodicea, about which Yeshua had nothing good to say.

According to the Jewish sage S. A. Hirsch, the gate of the city was the place where the king, leaders and judges of the city sat, where the official business of the city was transacted and other public affairs were conducted (2 Sam 19:9; Jer 37:7; Ruth 4:1). Only a prominent public person would sit in the gate of a city. Jewish tradition teaches that Lot had just attained to that position when this story occurs. This was extraordinary, since Lot was a foreigner living in a city where strangers were not tolerated.

Lot must have felt proud at having attained to this prominent position. As a righteous man, it may have been in Lot’s mind to accept this position with the hopes of spiritually influencing the lascivious Canaanites positively. If so, this was a gamble on Lot’s part, for his morals ended up being adversely influenced by his intimate contact with the Sodomites such that he was willing to throw his daughters to the homosexual “dogs.” Moreover, he lost most of his children to this evil society, he lost his wife to it, and his two daughters too who were adversely influenced by Lot’s lax moral standards. There is a fine line between being in the world versus being of the world. It may be our good intentions to influence the world for YHVH, but, if we’re not careful, the bad company of the world will corrupts our good morals. Besides, Lot already possessed a predisposition toward materialism and secularism to which the lifestyle, acceptance and accolades of the Sodomites gave vent to Lot’s lower nature.

YHVH warned both Abraham and Lot about the judgment coming on Sodom. Likewise, in our day, he’ll warn both the hot and lukewarm believers of the impending judgment to come. YHVH is just and merciful, and gives everyone a chance to repent and to follow him.

In the process of gaining the world’s acceptance, (Lot gained the position of being a judge in the city gates of Sodom, and he referred to the Sodomites as “my brethren,” 19:7), Lot lost his family and everything else.

How many lukewarm believers have expended great efforts to “win the world” (to Jesus/Yeshua/God), or to expand their religious kingdoms (allegedly “for Christ’s/Messiah’s sake”), but along the way have lost their marriages and families? The mark of a righteous and godly spiritual leader is one who has his family in order, rules his home well, is a one woman man and has temporal and spiritual his affairs in ordered along righteous lines. A righteous Abraham-like man, though not a perfect individual, is nevertheless not one who assimilates with the world. He does not go along with the world to get along with the world, or to “win the world to Yeshua.” Those who are like Abraham, not like Lot, demand that the world come up to the righteous standards of YHVH, and they do not compromise their high and lofty spiritual Torah standards in order to curry the favor of the world.

Sodom was Lot’s place of ministry, but who in the long run had the greater influence on whom? If in our attempts to win the world to Yeshua we become like the world, that’s called apostasy. Lot’s family was second in his priorities to that of his “ministry” and occupation. Furthermore, Sodom and the things that it represented materially and socially had become an idol in the mind of Lot. Elohim judged that wicked city and as well as the idolatry in Lot’s heart and mind. The idols—those things that exalt themselves in the hearts and minds of YHVH’s people—must and will come down. The judgments of a righteous and set-apart Elohim will insure this. There are judgments unto repentance as well as judgments unto death.

We are living in the days where a shaking is going on among YHVH’s people to separate the wheat from the tares and chaff. Many who think that they are wheat spiritually are in reality tares or chaff in the eyes of the Creator. Many who think that their lives spiritually are gold, silver and precious stones are in reality wood, hay and stubble in the eyes of the Creator. Some of us may be gold, silver and precious stones, but we may still have areas in our hearts and minds that are chaff or tares, are Laodicean or are like Lot.

Remember Lot’s wife! Let him who thinks he stands take head lest he fall. Selah!

4 thoughts on ““Remember Lot’s Wife!” What We Can Learn from Lot’s Life”