Exodus 32:16, The writing of Elohim. The contemporary square script letters of the Hebrew alphabet were likely introduced into Israel by Ezra the scribe after the Babylonian exile. Prior to this, Israelite writers used the Paleo-Hebrew pictographic script, which is of ancient origination and is likely the script that YHVH used when engraving the stones on Mount Sinai. 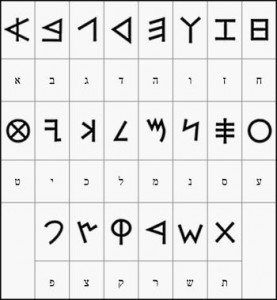 Most modern linguistic scholars trace the alphabet of the European languages, including English, back to the pictographically-based Phoenician alphabet of the tenth century B.C., which shows striking similarities with the Proto-Sinaitic or Paleo-Hebrew script of nearly one thousand years earlier indicating that our own alphabet likely originates from the ancient Hebrew script of Mount Sinai!

The Scriptures record that the time the Phoenician script came into prominence on the world scene coincides with the Israelite alliance with King Hiram of Tyre, who was the king of the Phoenicians. Theirs was a commercial and military alliance that dominated much of the known world, and Israel was the senior partner in this confederation, since the empire of Israel (under kings David and Solomon) controlled a large area of land from Egypt to the Euphrates River (in modern Iraq). In the eyes of some ancient nations (e.g., the Greeks), the Phoenicians and Israelites were regarded as the same people, and both were known by the label of Phoenicians (see The Origins and Empire of Ancient Israel, pp. 148–151, 229–231 by Steve Collins quoting George Rawlinson, nineteenth century biblical scholar and history professor at Oxford University).

From this evidence, we can see that it is likely that the script known as “the writing of Elohim” (in Exod 32:16) is the root of many of the world’s alphabets including Japanese! (See http://jamesjpn.net/index.php/2010/06/10/japanese-script-compared-with-hebrew/.)

(Paleo-Hebrew graphic used as per Creative License with thanks to mdewey60; a member of AboveTopSecret.com in his message thread, “Is the Rune Alphabet Related To Paleo-Hebrew?” at http://www.abovetopsecret.com/forum/thread794112/pg1)

7 thoughts on “Paleo-Hebrew: the Writing of Elohim?”