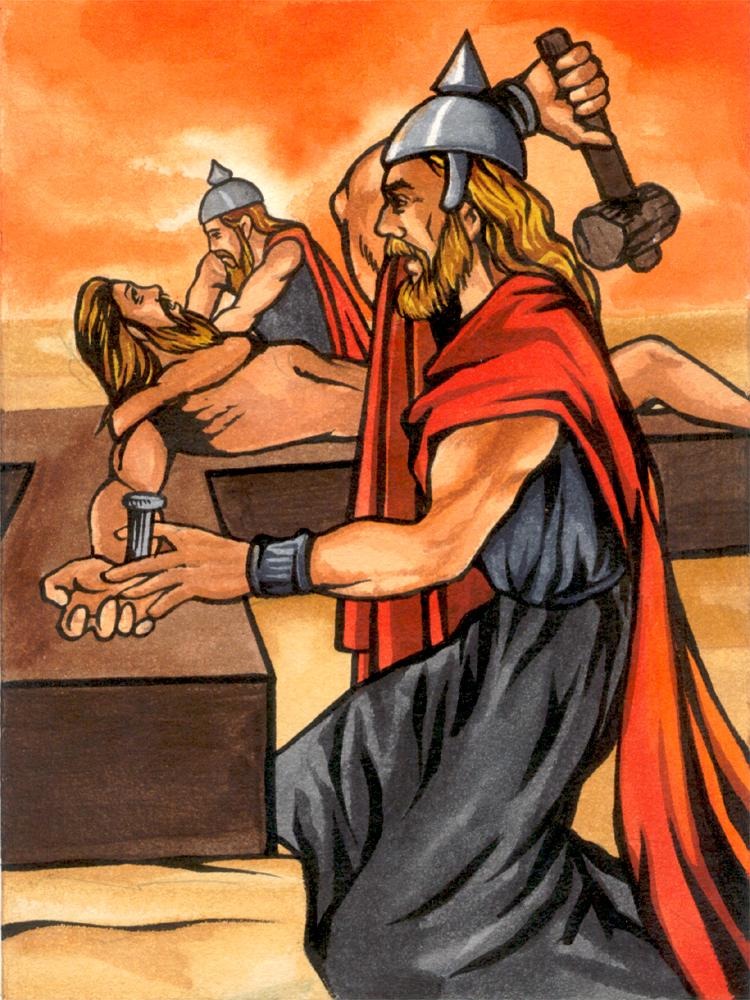 John 20:25, Nails. The Greek word for nail here is in its plural form. The plurality of the word nails is corroborated by the fact that all the major English translation of the NT including both the Alexandrian or Byzantine family of  Greek NT texts contain the Greek word helon (nails, plural) as opposed to helos (nail, singular). This is the case in the Aramaic NT as well (see the translations of Ethridge and Murdock, for example).

Moreover, William Mounce whose Koine Greek grammar book is used in the majority of seminaries in the U.S. in his Greek and English Interlinear NT designates this word as being in the genitive case, plural form and masculine gender.

What is the point here? This verse proves that Yeshua was crucified on a standard t-shaped cross, not on an upright stake minus its cross arm. Had he been crucified on the latter torture instrument, only one nail would have been used to secure his hands to the one post, not more than one nail as this text indicates—something which would have been required on the traditional t-shaped cross.

Some folks will argue that Yeshua was crucified on an upright stake or post. It is true the the Roman execution stake or cross took many forms of which the t-shaped cross was but one. It is also true that the the Paleo-Hebrew letter tav looks like our small letter t, and, according to some experts, pictographically signifies “the sign of the covenant.” It is also true that the Torah reveals that the furnishings in the Tabernacle of Moses were laid out in the form of a cross, and that the children of Israel were camped around the tabernacle in the form of a cross. We could go on, for there are other examples of the Paleo-Hebrew letter tav mentioned in the Scriptures including the mark that the angel placed on the foreheads  of those saints who signed and cried for the abominations done in Israel in Ezekiel’s vision (Ezek 9:4). This mark would save those righteous people from the punishing destruction that Elohim had declared over Jerusalem.

It is also true that the t-shaped cross symbol was usurped by the pagan, devil and sun worshiping heathens in their religious rituals. Scripture reveals that Satan is the great counterfeiter, for he takes that  which is good and perverts it in an attempt to deceive the unlearned and naive. With this in mind, let us not toss out the wheat of truth for the chaff of error of Satan’s perversions.

Whether you believe that Yeshua was crucified on a t-shaped cross, an upright stake or some other instrument of execution, in the big picture it doesn’t really matter.  On this blog, we try to present facts. Whether one agrees with them or not is up to the person, and we refuse to argue about it. The bottom line is that we must believe that Yeshua died for our sins, or we’re all spiritually lost and stand condemned before the Righteous Judge of the universe, and we have no hope of future life. It is our faith in Yeshua the Messiah’s death, burial and resurrection that saves us, not the instrument on which he was crucified.

Have you made that spiritual transaction with your Creator and Savior?

Joh 3:16  For God so loved the world that He gave His only begotten Son, that whoever believes in Him should not perish but have everlasting life.

Joh 3:17  For God did not send His Son into the world to condemn the world, but that the world through Him might be saved.

Joh 3:18  “He who believes in Him is not condemned; but he who does not believe is condemned already, because he has not believed in the name of the only begotten Son of God.

Joh 5:24  “Most assuredly, I say to you, he who hears My word and believes in Him who sent Me has everlasting life, and shall not come into judgment, but has passed from death into life.

2Pe 3:9  The Lord is not slack concerning His promise, as some count slackness, but is longsuffering toward us, not willing that any should perish but that all should come to repentance.

2Co 5:10  For we must all appear before the judgment seat of Christ, that each one may receive the things done in the body, according to what he has done, whether good or bad.

Rom 10:5  For Moses writes about the righteousness which is of the law, “THE MAN WHO DOES THOSE THINGS SHALL LIVE BY THEM.”

Rom 10:6  But the righteousness of faith speaks in this way, “DO NOT SAY IN YOUR HEART, ‘WHO WILL ASCEND INTO HEAVEN?’ ” (that is, to bring Christ down from above)

Rom 10:9  that if you confess with your mouth the Lord Jesus and believe in your heart that God has raised Him from the dead, you will be saved.

Rom 10:10  For with the heart one believes unto righteousness, and with the mouth confession is made unto salvation.

Rom 10:11  For the Scripture says, “WHOEVER BELIEVES ON HIM WILL NOT BE PUT TO SHAME.”

Rom 10:12  For there is no distinction between Jew and Greek, for the same Lord over all is rich to all who call upon Him.