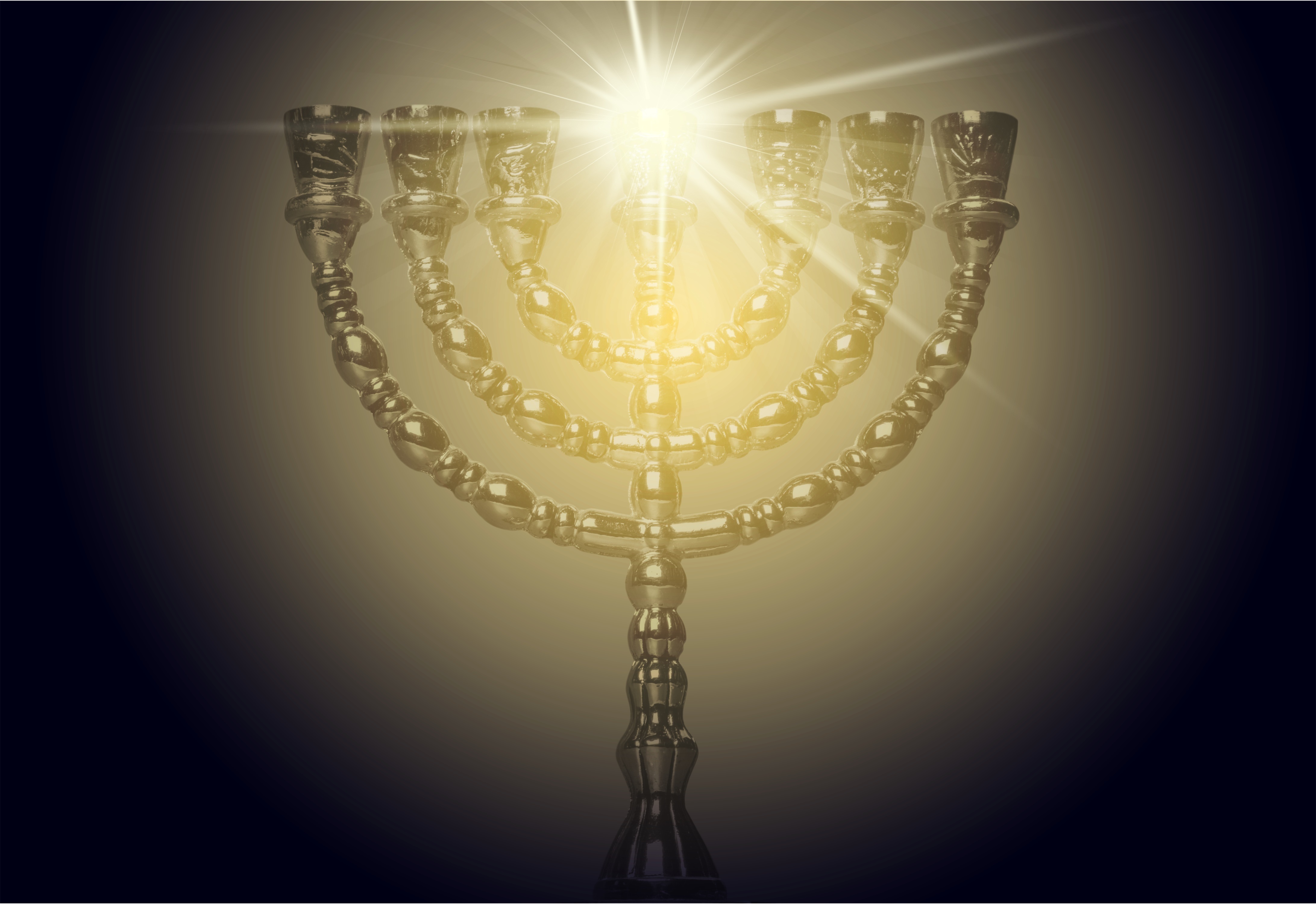 Exodus 25:31–39, Menorah of pure gold. The menorah was beaten out of a solid ingot of pure gold and stood on the left side of the holy place inside the tabernacle. It was the only light in the holy place. The menorah had seven branches with three on either side of a central stem. Each branch had three decorative cups, a knob and a flower resembling that of an almond flower. The cups were called lamps and each was filled with the purest olive oil and contained a wick that was lit. The menorah was lit each day, and each of the six outer lamps were designed so that when lit its flame pointed toward the central stem. The menorah had tools—tongs and spoons—to tend the wick. These implements were used to clean and to prepare the lamps and to remove the previous day’s ashes.

The menorah is a picture of Yeshua, the Tree of Life, who likened himself to a vine and his followers to branches” (John 15:1–7). It also pictures the idea that the saints are members of the body of Yeshua (1 Cor 12:12) and are established in him (2 Cor 1:21). His followers are connected to him, draw sustenance from him, and the spiritual light of their lives point toward him in all that they do. Believers are to be “on fire” for doing the work of Yeshua. The Spirit of Elohim directed by the Torah—both pictured by the olive oil—fuels that fire. On the Day of Pentecost, the believers in the upper room received fire of YHVH’s Spirit and had his Torah-law written in their hearts. Through the empowerment of the Spirit—both the fruits and the gifts—the saints were able take the light of the gospel out to the world. The significance of the menorah in the believer’s life is evidenced by the fact that Scripture reveals that it (not the cross) is the actual symbol for assembly of believers in Yeshua (Rev 1:12,20).

The Golden Menorah in More Detail

It is estimated that the menorah was constructed of 90 pounds of gold, which is 1440 ounces. If gold is $1200 per ounce the menorah would have been worth $1,728,000 in the value of the gold alone, not including the workmanship to construct it.

Some believe that the light of the menorah was reflected to point only forward. It was the only light in the set-apart place. We are to go forward only in our spiritual walk, not backward. Advance spiritually in light, but retreat and you do so in darkness (Ps 119:105).

The almond tree is the first fruit tree that blossoms in the spring in Israel. Yeshua is the firstborn among many brethren. The seven branches of the menorah, which are a picture of Yeshua, corresponds to the seven spirits of YHVH in Isaiah 11:2 and Revelation 4:5.

The wicks of the menorah were made from the priest’s worn out or discarded garments. From this we learn that we can’t discard the work of yesterday’s ministers, for we stand on their shoulders and use what they put into us to light our path spiritually to see what is ahead for us. What are we leaving behind us for the next generation?

Matthew Henry says in his biblical commentary on Exodus 27:20 that the pure oil signifies the gifts and fruits of the Set-Apart Spirit which all believers receive from Messiah (Mashiach) who is the oil-anointed One. Mashiach is the vine to which we are attached, for we are the arms and branches (John 15:1–2) and the branches are attached to the sustenance-carrying vascular system of the main trunk (as pictured by the hollow-tubed seven-branched gold menorah). The menorah is another picture of Yeshua who is the tree of life to which we must be attached. Only then will we be lights shining the fruits and gifts of the Spirit into the darkness of men’s lives as Yeshua commanded us to be (i.e. menorahs on a hill, Matt 5:14–16). That is why the symbol of the elect body of believers is the menorah as we see in Revelation 1:13 and 20.

3 thoughts on “The Menorah—The Tree of Life and Yeshua”