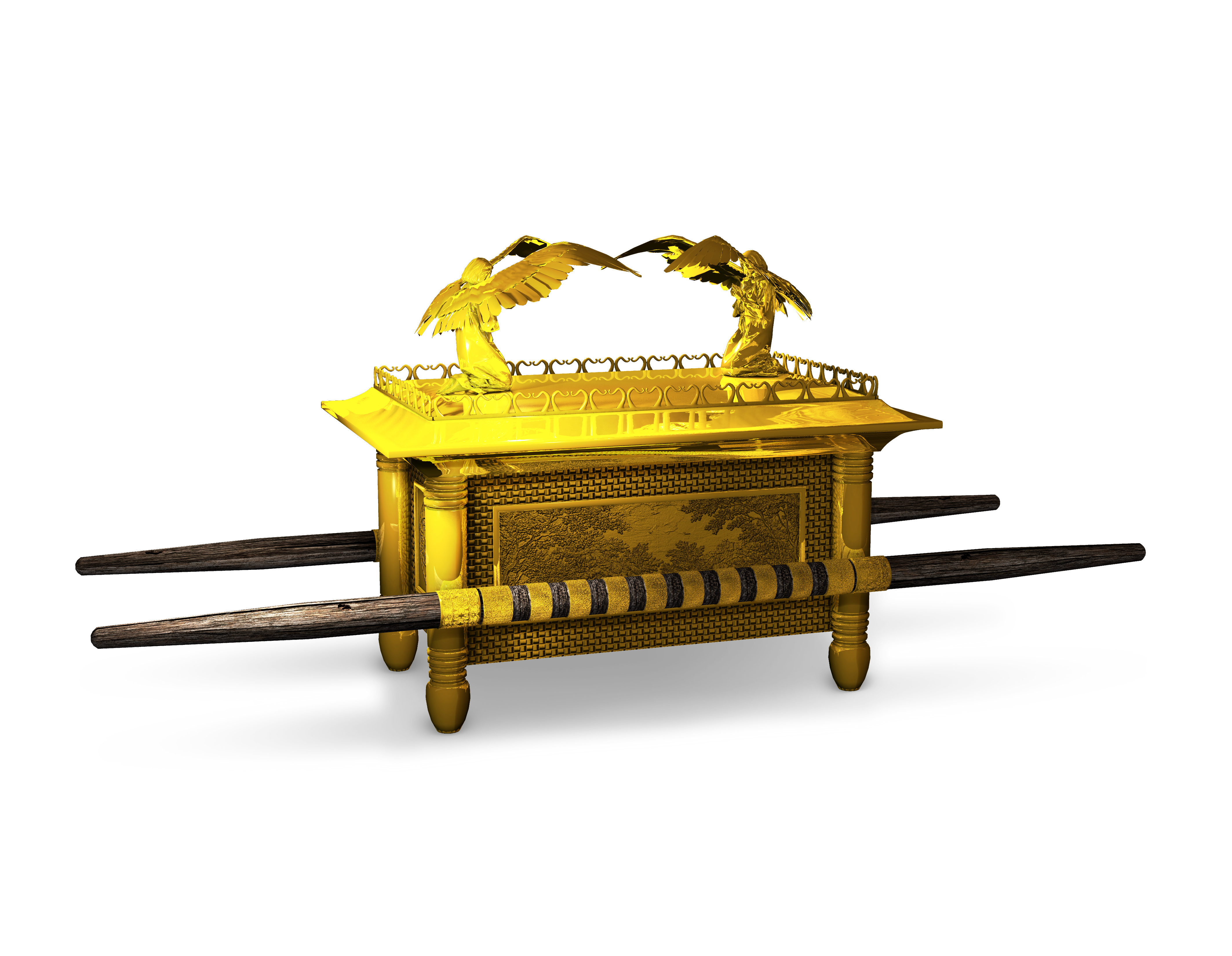 Exodus 25:10–22, Ark. The ark of the covenant was a small box of acacia wood overlaid in gold, which contained the golden pot of manna, Aaron’s rod that budded and the two tablets of stone containing the ten statements of Elohim—commonly called the Ten Commandments. Against the ark was leaned a scroll of the complete Torah (Deut 31:26).

Covering the ark was a golden cap called the mercy seat or kapporet and is related to the word kippur as in Yom Kippur, the Day of Atonement. Both share a common Hebrew root, which is the word kapar, which according to The Theological Wordbook of the Old Testament (TWOT) means “to make an atonement, make reconciliation, purge”) and the mercy seat—the golden “lid” covering the ark of the covenant located in the D’veer (i.e. the inner shrine of the Tabernacle of Moses)­—which in Hebrew is the word kapporet was “the place of atonement or the place where atonement was made.” The TWOT defines what happened at the kapporet as follows:

“It was from the … mercy seat that [YHVH] promised to meet with the men [of Israel] (Num 7:89). The word, however, is not related to mercy and of course was not a seat. The word is derived from the root ‘to atone.’ The Greek equivalent in the LXX is usually hilasterion, “place or object of propitiation,” a word which is applied to [Messiah] in Rom 3:25. The translation ‘mercy seat’ does not sufficiently express the fact that the lid of the ark was the place where the blood was sprinkled on the day of atonement. ‘Place of atonement’ would perhaps be more expressive.”

The mercy seat covering the ark that contained the Torah is a vivid symbolic picture of YHVH’s mercy triumphing over his judgment (Jas 2:13). We all deserve death for violating his commandments, for the wages of sin is death (Rom 6:23) and sin is the violation of YHVH’s Torah commands (1 John 3:4). However. Yet when we repent of our sins and place our faith in Yeshua’s atoning death on the cross as payment for those sins, YHVH forgives us and grants us his merciful grace.

Everything in, on and around the ark pointed to Yeshua. Inside the ark was the golden pot of manna, which points to Yeshua who the bread of life—the Word of Elohim made flesh. Aaron’s rod that budded speaks of Yeshua’s role as the ultimate high priest due to his atoning and life-giving work at the cross. The two stone tablets and the Torah scroll speak of the Yeshua who was the Word of Elohim from the foundation of the world (John 1:1,14), and whose words or instructions in righteousness the saints are instructed to follow (John 14:15; 1 John 2:3–6; Rev 12:17; 14:12).

Overshadowing the mercy seat were two golden cherubim with outstretched wings. This is a picture of YHVH’s throne in heaven, which is surrounded by cherubim and other living creatures that sing his praises and minister to him (Rev 4).

The Ark of the Covenant in More Detail

The ark of the covenant is the gold-covered acacia wood box with the pure gold crown or mercy seat upon which are the two gold cherubim that represented the very throne and glorious Presence of YHVH himself. Inside the box were the tables of the Torah, Aaron’s rod that budded (Num 16) and the golden pot of manna (Exod 16:32–34). Against the ark was leaned a scroll of the complete Torah (Deut 31:26).

Once a year, on the Day of Atonement, the high priest entered this part of the tabernacle to make atonement for his sins and those of the nation of Israel (Exod 16:14–19). The most set-apart place was also called the oracle (D’veer), for it was here that YHVH often met with and talked to Moses giving him instructions on how to govern the Israelites (Exod 25:21–22).

The gold-covered wooden box pictures resurrected and glorified humanity raised to that place by the work of Yeshua and the mercy of YHVH. Two realities identify the bride of Yeshua: Spirit and truth (John 4:23); namely, the truth of Torah of the Written Torah (the box contained the two stone tablets) and that of the Living Torah who is the Manna or Bread of Life. In addition, Aaron’s rod that budded (also in the box) pictures the authority and fruitfulness of the priesthood of believers (2 Pet 2:5-9) through the work of Yeshua on the cross (see also Rev 11:17; 12:14). Additionally, the Torah scroll leaning up against the ark illustrates to us that without total dependence on Yeshua (his work at the cross and partaking of the spiritual manna of Yeshua’s broken body we cannot properly keep the Torah. Only with Yeshua living in the heart of a regenerated believer by the power of his Spirit can one keep the Torah. Without the Torah leaning on Yeshua, the Torah becomes the dead letter of the law (2 Cor 3:6)!

Exodus 25:21, The testimony. This is the Torah in codified form or what became known as the law of Moses. Prior to this, the Torah was YHVH’s oral instructions to men passed on down generationally from teacher to student, from father to son. Moses, under instructions from Elohim, wrote this oral Torah down as it was transcribed to him on Mount Sinai (Exod 24:12) and to which additions were made on an as-need basis as YHVH subsequently spoke to Moses from his earthly throne of the tabernacle (Exod 25:22).

Exodus 25:22, There I will meet with you. Between the two cherubim was the glowing, anointed, manifest presence of YHVH called the Shekinah. This was the earthly throne room of Elohim. It also pictures the glories of the New Jerusalem and life happily ever after for Yeshua and his spiritual bride.

The manifest presence of Elohim is the last of seven “items” in the tabernacle and it is also the one ingredient that is missing in all the other religions of the world. Yes, many of the world’s false religions have their signs, wonders and supernatural experiences, but these are cheap demonic counterfeits that only imitate the real thing—the actual Presence of the Almighty Creator—Yehovah Elohim. In the end, despite all that these false religious systems promise, they bring shame, confusion, guilt and eventual death and eternal separation from Elohim.

In the Tabernacle of Moses, the first six items were made with human hands. Six is the number of man. YHVH’s Presence cannot be constructed by the hand or mind of man. It just is, and it doesn’t come as a result of anyone conjuring it up. It comes as a result of repentance, holiness, obedience and humans seeking Elohim with all their hearts, while following the protocols he has laid out, which, when followed, lead to him. There is no other way.

The Presence of Elohim is what is missing in every other of the world’s religious systems. It was even missing in the Second Temple!

In YHVH Elohim’s Presence, a human is miraculously and powerfully changed and transformed spiritually from the inside out.

There I will [Heb. ya’ad] meet with you…I will commune [Heb. d’bar]…I will give you. This entire verse is pregnant with spiritual meaning relating to the holy of holies, which was YHVH’s point of contact between heaven and earth. From this place he desired to meet with Israel, to speak with them, and to give them all of his written instructions or commandments—the Torah. Of what is the holy of holies an earthly shadow picture? (See Heb 8:2, 5; 9:11, 23–24.) Beyond this, to what did the Tabernacle of Moses point? (See Rev 8:1–5; 9:13; 11:19.) Elohim promised to commune with or speak to the Israelites from above the cherubim, whose golden wings arched over the mercy seat. What does this point to at the spiritual reality level? (See Rev 4:1–11.)

The word mercy seat is better translated as “place of atonements,” for it was here, on the Day of Atonement (Yom Kippur), that the high priest sprinkled blood from the altar of sacrifice to make atonements (plural) for his sins as well as for those of his family and the entire nation of Israel. The ark of the covenant and its mercy seat lid represented the throne of Elohim in heaven. Only the high priest was allowed into the holy of holies. Are the saints of Yeshua now his new, non-Levitical priesthood? (See 1 Pet 2:9; Rev 1:6; 5:10.) How do we as believers in Yeshua the Messiah gain access into heaven’s holy of holies where our Father has his throne, so that we might commune or speak with him? (Read John 14:6; Heb 10:19–22; also 4:14–16; 9:11–28.)

In the Tabernacle of Moses, there was a veil or curtain separating the holy place from the holy of holies that prevented the regular priests from entering the latter. In a spiritual sense, what has now happened to that veil so that the redeemed of Yeshua can go directly into the presence of YHVH Elohim, their heavenly Father, and speak to him, commune or meet with him and hear him speak? (Read Heb 10:19–22.)

The holy of holies was the place where YHVH met with his people through Moses and Aaron, the high priest. Now, by the blood of Yeshua because of the spiritual relationship we have with him, we are able to come boldly, as YHVH’s children, before the mercy seat of his throne. This we do through prayer, praise and worship. This is how we commune and meet with Elohim, and how he does the same with us.

This is what YHVH meant by the first clause in this verse: “There I will meet [Heb. ya’ad] with you.” The Hebrew word for meet is ya’ad meaning “appoint; fix, assemble, betroth, or gather.” It is Elohim’s fixed design to meet his people at the mercy seat, or place of atonements, which is where the blood of the sacrificed animal was sprinkled, and the incense from the golden censor was released by the high priest. This was a place of divine appointment where man and his Creator met. Man was expected to come here for an appointed meeting, and Elohim promised to meet man there. As noted above, Yeshua is our Great High Priest who, through his shed blood atonement for our sins, opened the way for us to enter into the very throne room of the Father—something the ceremonies of the Tabernacle of Moses prophetically portended.

The holy of holies was an earthly picture of Elohim’s throne in heaven. It is through the blood of Yeshua and the grace of Elohim that the redeemed saint can now come before Elohim’s heavenly throne (Heb 4:16) and leave there the sweet smelling incense of our prayers, praise and worship (Rev 5:8–10; 8:1–4).

The Hebrew word ya’ad is the root and verb form of this Hebrew word, while mo’ed is noun form of the same word. Mo’ed means “divine appointment.” The word feasts in Leviticus 23:1–2 is the word mo’edim, which is the plural form of mo’ed. What are the seven feasts of YHVH, which he calls divine appointments, and when he promises to meet with his people? (See Lev 23:1–44.) Observing these feasts, like coming into the holy of holies, is yet another way to commune or meet with our Father in heaven, to hear the voice and to receive the instructions in righteousness of the One in heaven who sits on the throne of mercy surrounded by the cherubim.