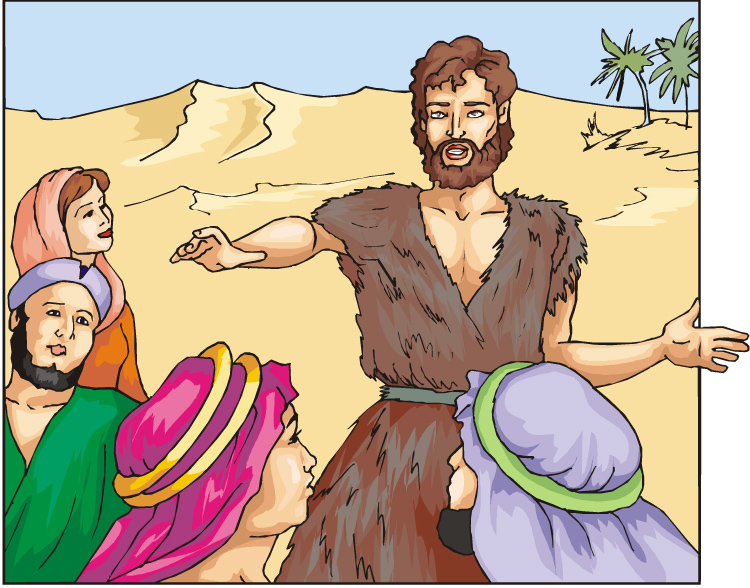 Luke 3:7–17, Then he said to the multitudes. What’s really going on in this exchange between John the Baptist and the religious folks of his day? Let’s step back and look at the bigger picture.

The multitudes of Jews had to make the long, hot and arduous journey through the Judean mountains down to the Jordan River, which was the lowest spot on earth, to hear John the Baptist, who was the latest fad preacher to come on the scene. However, when they arrived at his lonely wilderness pulpit, instead of stroking their egos by complimenting them for their religious zeal, he excoriates them and calls them a brood of vipers. John confronts them by saying that if they don’t repent, the fires of YHVH’s judgment will consume them (John 3:7–9). John’s preaching pierces their hearts, and lays them low spiritually. In a proper response, they ask him what he expects them to do (John 3:10). John then preaches a message of social justice involving giving to the poor, being fair and honest in one’s business dealings, and if one is a government worker, then treat the citizens one serves with respect (John 3:11–14).

Interestingly, he doesn’t instruct these religious Jews in what many consider to be the specifics dos and don’ts of the Torah-law, although we could rightly assume that many of these folks already had a basic understanding of Torah. Whether they were living up to YHVH’s law or not was another question.

Whatever the case, in our day, many if not most gospel-believing Torah teachers are telling their listeners to punctiliously start observing the 613 commandments of the Torah, and to cease working on the Sabbath, stop eating pork, toss the Christmas trees into the dumpster, grow a beard, put on some tassel sand and a head-covering, and start saying “Yeshua” instead of “Jesus.” Was this John’s message? Not exactluy. John instead tells his hearers to go back to the basics—something they either never learned to do, or somewhere along their spiritual journey they had forgotten to do. He’s really saying, “Just be nice to your neighbor. Be fair, honest, loving and caring in your dealings with your fellow man.” And then John points them to Yeshua the Messiah who is soon to become the new star on the Judean preaching scene (Luke 3:16–17). So love your neighbor and follow Yeshua—the most loving Person of all, is what John, in essence, is telling these Jews to do. Later, Yeshua taught a similar message when he instructed his disciples not to omit the weightier matters of the Torah: justice, mercy and faith (Matt 23:23). In his Sermon on the Mount (Matthew chapters five to seven), Yeshua teaches his disciples to not only obey the letter of the Torah, but also the more arduous requirements of the spirit of the law. Moreover, Yeshua told his disciples that their distinguishing mark should be their love for one another (John 13:35). Paul echoes this same truth in Romans 13:10 when he declares that “love is the fulfilling of the Torah-law” (Rom 13:10), and again in 1 Corinthians 13 (the Love Chapter), when we states that love is the greatest thing. Of course, loving our fellow man involves Torah-obedience (Rom 13:8–9), as does loving Yeshua (John 14:15). The issue here is what is our motive and our approach when sharing the gospel with others?

When sharing the message of repentance and the Torah with people, what is our approach? Do we smack people over the head with a Torah scroll as we’re telling them all about its religious and legal requirements that they must now do, or do we tell them simply to love one another and to follow Yeshua, which inevitably, but lovingly, will lead them to observing the righteous requirements of the Torah?

These Jewish folks coming to hear John preach were highly religious—many were even zealots. After all, some had hiked for several days, on foot, from the heights of Jerusalem descending some 20 miles more than 4,000 feet in elevation through the barren desert mountains of the Judean wilderness to hear John preach. Now that’s zeal! Nowadays, if we can’t get to the church building in ten minutes in our air-conditioned automobile, and then have nice cushioned chairs waiting for us when we get there, or if the preacher is deemed to be too long-winded, we here words like, “Forget it Mildred, I’m staying home! I’ll watch it on YouTube!” This multitude of Jews not only had to go down to the Jordan River, and that wasn’t the worst part. When it was time to go home, they then had to make the steep 4,000 foot climb back up to Jerusalem. Oy vey!

What is the bottom line here? Why did John rebuke them, and then instruct them as he did?

These multitudes of Jews were religious zealots, to be sure, but that was the problem—they were caught up in religiosity. After all, they were Abraham’s children. They had it made spiritually. Just ask them. And since they were Elohim’s chosen people, they wanted to make certain that their one-way ticket out of here for escaping Elohim’s judgments was stamped and good to go. (Sounds like some adherents to the pre-trib rapture doctrine!) That’s why John rebuked them and demanded that they repent. Their hearts were evil and were far from Elohim (Remember Matt 15:8?); they were merely playing religious games—working the system for their own advantage. John was calling them on it. Because of this, they were sure to incur the wrath of Elohim—unless they repented and began to pursue love, righteousness and holiness, or in Yeshua’s words, “The weightier matters of the Torah.”

But what did John expect them to repent of, we might ask? Of not being nice people —of forgetting the weightier matter of the Torah! These folks had forgotten the basics of what the Torah was all about. Oh yes, they were religious, and pretty Torah-observant as far as it went, but they were a bunch of selfish, arrogant, self-serving and self-seeking individuals who cared little or nothing about their fellow man—whether he was starving and naked or not, whether their business dealings were fair and just, or whether they were content with their socio-economic station in life or not. Yeshua also dealt repeatedly with these same issues in his ministry—the super-religious people who thought pretty highly of themselves, but who were in reality, avaricious, hypocritical and supercilious bigots. Yeshua had to rebuke even some of the early believers for the same attitude. Remember the Laodicean church (Rev 3:14–21)?

John in his first epistle asks the question, “How can you say that you love Elohim whom you haven’t seen if can’t even love your brother who you have seen” (1 John 4:20 cp. 1 John 3:17)?

What John the Baptist and these other scriptures are teaching us is that religiosity (or religious works including legalistic Torah-obedience) is unacceptable to the Creator if we are failing to love our fellow man in the process. In fact, it’s totally unacceptable to Elohim. He wants us to love him by loving each other, which is the whole message of Yeshua’s Parable of the Sheep and Goats in Matthew 25:31–45. Let’s, again, recall Paul’s admonitions to believers in 1 Corinthians 13­—the famous biblical “Love Chapter.” There Paul states that all manner of religious works are meaningless if not motivated out of love.

Have you noticed that some of the meanest and most uncaring people on earth are religious, even Torah-obedient zealots? Let’s break this cycle of mean spiritedness. Again, Yeshua said that his disciples would be known for their love one for another (John 13:35). Again, remember, that love is the fulfilling of the Torah (Rom 13:8–10).

So let’s all just start being nice to one another, while at the same time combining this with obedience to the righteous requirement of the Torah. This just might be the definition of and key to spiritual revival…don’t you think?

4 thoughts on “The radical message of John is still radical”