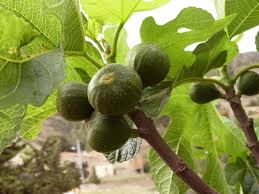 Yeshua chose his words carefully when describing the fig tree in his parable. (It helps to know something about fig trees, which as an horticulturalist I have cared for.) He mentions the branches being tender and beginning to put forth its leaves. Like all fruit trees, the fig tree begins to come alive in the spring after winter dormancy. First the buds swell and begin to pop with leaves, and then the fruit begins to form (the flower is actually inside the fruit). As the summer progresses, the leaves and fruit enlarge and the branches harden until harvest time in the fall. Yeshua seems to be describing a fig tree in the early spring. If the weather conditions are conducive and there is a long growing season, a fig tree will produce two crops of figs: one in the mid-summer and another one in the early fall.

To carry this metaphor over with regard to the reunification of the two houses, sticks, trees of Israel (i.e. Ephraim and Judah, as per Ezek 37), could we not say that the Jews (or Judah) returning to the land of Israel in 1948 is like the fig tree in early spring—young and tender, and preparing to bear its first crop of figs. By the time it produces its second crop of fruit in the fall, Ephraim (the Christians) will have been rejoined to the fig tree and the two (Ephraim and Judah) will be like a fig tree ready for harvest. This timing also corresponds with the biblical fall festivals which predict the second coming, which is also when the two houses of Israel will be regathered en masse.

2 thoughts on “Is modern Israel the fig Tree of Matthew 24?”