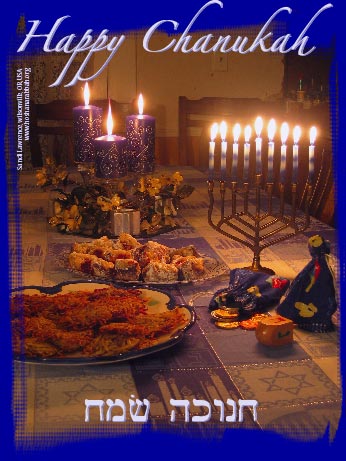 John 10:22, The Feast of Dedication [or consecration].

To the casual observer, Hanukkah is a Jewish holiday that occurs around Christmas-time and has something to do with lighting a menorah-like candelabra, which somehow relates to some important event that occurred a long time ago in Jewish history. Some Bible teachers even claim that Hanukkah is pagan-based holiday that somehow honors the demonic sun god of antiquity. But as we shall see below, there is a hidden truth behind the Hanukkah holiday that the devil doesn’t want people to know about. In fact, by the end of this study, you will hopefully see that Hanukkah celebrates the truth of the Messiah’s incarnation better than Christmas ever did and without all the pagan trappings. You’ve probably never heard this before and wonder how this could be. Stay tuned.

Anyone who has barely scratched the surface of Christmas’ origins realizes that they are profane and unbiblical. Christmas is the Christianization of some vile pagan traditions based on celebrating the winter solstice in honor of the demonic sun god through lewd and drunken orgiastic satanic rituals. Though the tradition of the Christmas tree came later, it is rooted in pre-Christian sex worship rituals that come straight out of demonic sun god worship, and something the Bible in many places condemns and forbids the saints from practicing.

Hanukkah, on the other hand, doesn’t share Christmas’ pagan origins. Rather, this holiday links back directly to one of YHVH’s seven commanded biblical festivals. Though Hanukkah isn’t a commanded biblical holiday, and is of man’s creation, it still has prophetic implications that are worth noting. What’s more, it doesn’t carry the pagan baggage the Christian holidays like Christmas, Easter, Lent, All Saints Day (i.e. Halloween) and the others all do.

In our study of the origins of Hanukkah, let’s first prove that there is a link between the biblical fall festival of Sukkot or the Feast of Tabernacles (Lev 23:33–43) and Hanukkah. How is this? Interestingly, both Hanukkah and Sukkot along with the Eighth Day last for eight days. According to the intertestamental Book of Maccabees, Hanukkah was a second, belated Feast of Tabernacles (Heb. Sukkot and the Eighth Day (Heb. Shemini Atzeret; see 1 Macc 4:44–59; 2 Macc 1:7–9; 10:1–8). After the Jews defeated the Greeks’ attempt to destroy Judaism and the Jewish people, the Jews had to cleanse and reconsecrate their temple from pagan defilement before worshipping YHVH there. The temple wasn’t ready to be rededicated at the biblically prescribed time of Sukkot in the seventh month of the biblical calendar (in Sept/Oct), which is when Solomon dedicated the first temple (2 Chr 5:3; 7:8–9). Instead, the Jews rededicated the cleansed temple roughly two months later in the ninth month (in December), and they celebrated a belated or second Sukkot roughly two months later after the temple was finally cleansed.

Moreover, the lighting of giant menorahs was a major aspect of Sukkot’s joyous celebration (The Temple, p. 224ff, by Alfred Edersheim). Yeshua seems to make reference to this light celebration going on in the temple on the last great day or seventh day of Sukkot (called Hoshana Rabbah). At this very time, Yeshua refers to himself as the (true) light of the world (John 8:12 cp. 7:12).The lighting of an eight-branched candelabra at Hanukkah, also known as the Festival of Lights, reflects this Sukkot tradition of lighting menorahs. It also speaks of the miracle of the light of YHVH’s truth being preserved in Israel despite the heathen’s attempt to stamp it out.

Interestingly, the timing of Hanukkah also relates to Yeshua who is the light of the world (John 8:12). There is strong biblical evidence to suggest that Yeshua was born at the biblical festival of Sukkot in the early fall. If this is the case, Yeshua would have been conceived in the virgin Mary’s womb by the Spirit of Elohim nine months earlier at the time of Hanukkah. The Bible teaches that human life begins at conception (Exod 21:22; Ps 139:13–16; Jer 1:5; Luke 1:15, 41, 44), not at birth as we in the West typically view it. Therefore, Yeshua’s life really started when he was conceived in Mary’s womb, not when he was born. Therefore, in Hebraic thought, Christmas isn’t really celebrating the beginning of Yeshua’s life or incarnation. Hanukkah does!

Despite the fact that Christmas misses the mark in celebrating the beginning of Yeshua’s life, Hanukkah and Christmas share something in common. They both celebrate the coming of Yeshua, the Word of Elohim from heaven to this earth to be the light of the world to show man the way to the Father in heaven. Sadly, Christmas is the Christianization of some horrific pagan holidays to arrive at this truth. Hanukkah, however, carries none of this ungodly baggage, as we have attempted to demonstrate so far in this short study.

Why did the Jews choose the twenty-fifth day of the ninth month on which to rededicate the temple? Did this timing have something to do with the winter solstice as the December 25 timing of Christmas does and as some Bible teachers suggest? Absolutely not. There is actually a connection between the timing of Hanukkah (which by the way falls well before the winter solstice) and an important historical event that occurred in Israel’s history. It also relates to a Messianic prophecy having to do with the coming of the promised Messiah into the world. This we see in the biblical Book of Haggai. This tiny book records that on the day just before what would later become known as Hanukkah or the Feast of Dedication (i.e. the twenty-fourth day of the biblical ninth month, which is called Chislev or Kislev), the cornerstone to the second temple was laid (Hag 2:19). This is the same temple that the idolatrous Greeks would desecrate some 350 years later. Therefore the Maccabeean Jews had solid biblical precedence for choosing the date of Kislev 25 to start celebrating the eight day holiday of Hanukkah or the Feast of Dedication, for this was the day after the prophetic decree went out to lay the cornerstone for that very temple 350 years earlier. Therefore, the Maccabeean Jews merged the timing of the commencement of the second temple’s construction with the idea that the Solomon’s temple was dedicated on Sukkot, and they celebrated a belated Sukkot-type celebration in the ninth month starting on Kislev 25, which became known as the Feast of Dedication or Hanukkah.

Furthermore, when Haggai the prophet records the laying of the cornerstone for the second temple, he also speaks about the Desire of All Nations — another name for Yeshua the Messiah — coming to that very temple and filling it with his glory (Hag 2:7). This is the greater reason why this temple had to be built! The Messiah needed a temple to come to, so that many biblical prophecies could be fulfilled. Moreover, in verse nine, Haggai prophesies that the glory of the second temple would be greater than that of Solomon’s temple. How is this? From a physical perspective this is hard to understand, since Solomon’s temple contained billions of dollars worth of gold alone. The second temple could hardly compare to the glorious and extravagant riches of the first temple. Yet considering that this would be the temple to which the Messiah, the Son of Elohim would come, YHVH through the prophet could predict that “the glory of this latter temple shall be greater than the former” (Hag 2:9).

Finally, John, the Gospel writer, in a sense, confirms Haggai’s prophecy when records a curious double entendre statement that Yeshua made. While at the second temple, Yeshua predicted the temple’s destruction and its raising up again in three days. Those around him thought he was referring to the destruction and rebuilding of the actual physical second temple.  John, however, informs us that Yeshua’s prophecy was instead referring to the temple of his body, which would be destroyed and raised up or resurrected after three days in the grave (John 2:19–22). As the cornerstone for the second temple (the very temple to which Yeshua came on the Feast of Dedication in John 10:22) was laid at Hanukkah time, so Yeshua who is the Rock of our salvation (Deut 32:15; Pss 62:2; 89:26) and our Chief Cornerstone (Eph 2:20; 1 Pet 2:6) was miraculously conceived at this very time by Elohim in the womb of the virgin Mary. He was then born nine months later at Sukkot or the Feast of Tabernacles. It was at Sukkot that Yeshua the Messiah or Immanuel (or El God with man) was born in human likeness and came to dwell or tabernacle with men (1 John 1:1, 14). This then is the greater and glorious story behind the Jewish holiday of Hanukkah that has been hidden for millennia!