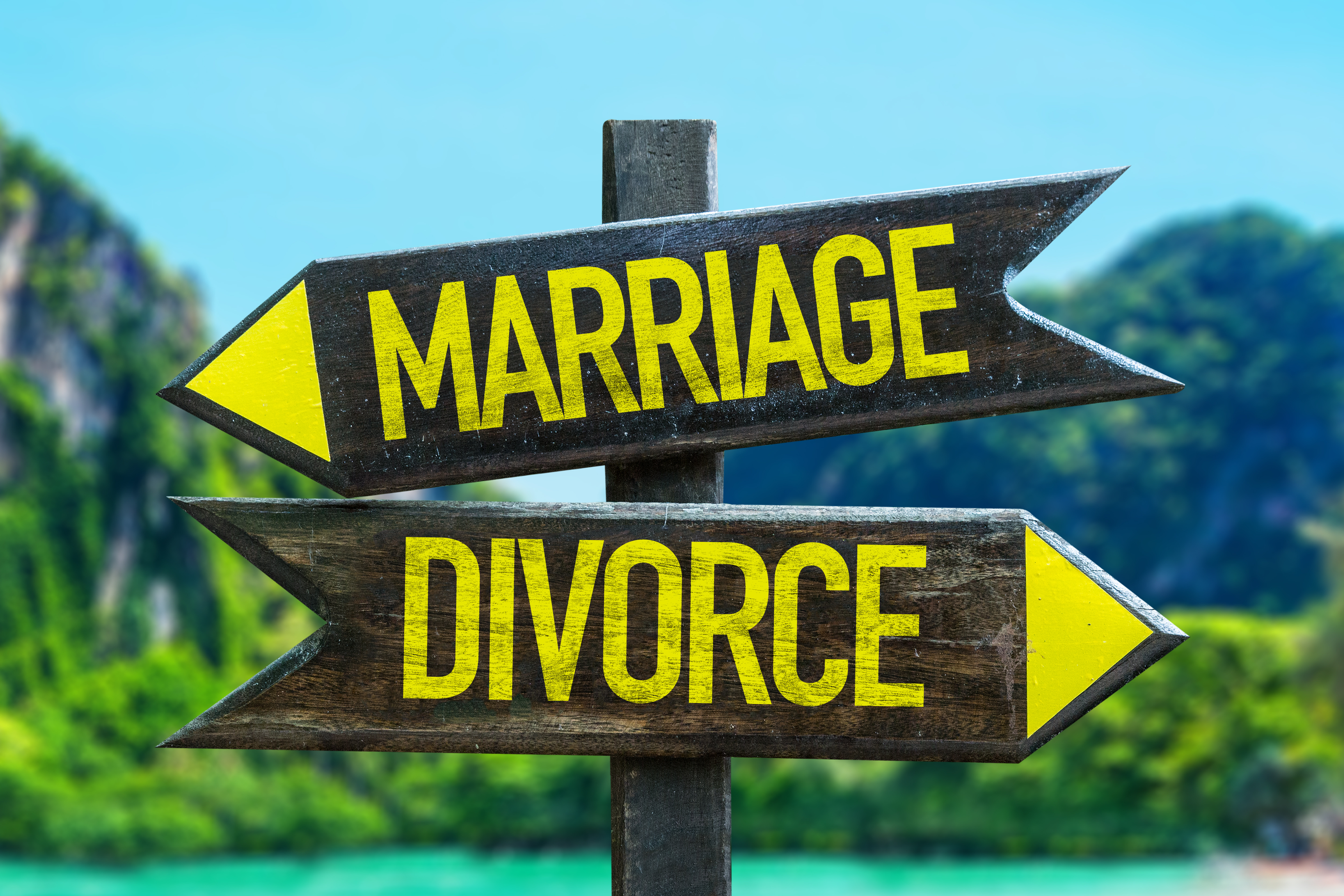 In the study below, we will discuss why Moses added the divorce clause to the Torah, and why Yeshua permitted it and what he had to say about it. (For the record, I am not divorced and thus have no dog in the fight. I am simply analyzing what the Bible has to say to say on the subject and attempting to accurately report my findings. — Natan)

Matthew 19:8, Moses permitted. From Yeshua’s statement here, it would seem that Elohim gave Moses certain freedom and latitude to redefine certain Torah principles to accommodate the needs and realities of fallen and sinful man.

In the case of marriage, even though it was Elohim’s highest ideal for a man to leave his parents and cleave to one wife for the rest of his life or until she died (Gen 2:24), the reality is that man too often is incapable of living up to the Creator’s highest ideal because of the hardness or sinfulness of his heart. It is important to note that YHVH gave the marriage command before the fall of man had occurred (Gen 2:24 cp. Gen 3:1–6). In light of the fact of the fall of man when sin entered the world thus negatively affecting the marriage relationship, YHVH allowed Moses to permit divorce under certain circumstances (see Deut 24:1–4).

Had Moses not made allowances for the sinfulness and hardness of the human heart and forbad all divorce in Israel in an effort to strictly adhere to YHVH’s highest letter-of-the-law ideal for marriage, then the societal results might have been unimaginably chaotic. For example, people would have been compelled to remain in abusive, criminal, adulterous, irreligious or even anti-religious relationships or in situations of abandonment or substance abuse. What kind of impact would this have had on the children and on future generations?

Not only that, had people been compelled to remain in ice-cold marriages, this would have negatively impacted the expansion of the human population.

In ancient Israel, ideally everyone was an Israelite (either natural born or grafted in) meaning that it was theoretically impossible to get into a marriage relationship with a heathen or an idolator. If this were always the case (and it would be naive to assume that it was), then YHVH’s ideal standard for marriage could have been the rule and not the exception.

However, because of sin, humans seldom live in ideal circumstances where Torah’s principles are followed perfectly to the letter and the spirit; therefore, from time to time some allowances have to be made.

For example, today what is one to do when one spouse in a marriage comes to faith in Yeshua, while the other spouse remains an unconverted sinner? Paul discusses this problem in 1 Cor 7. The disposition of the unconverted spouse vis-à-vis the converted one will determine the outcome of the situation. Sometimes the couple can continue in a state of peaceful coexistence, and sometimes not.

The understanding presented here regarding marriage and divorce in no way justifies the dissolving of marriage for any or all reasons. The Scripture explicitly and implicitly indicates the criteria for a biblically-allowed divorce. (That subject is beyond the scope of this present discussion.)

Needless to say, too many believers—even purportedly Torah-pursuant ones—have grossly misapplied the biblical marriage principles to justify their illicit divorce procedures. This, again, is a subject for another discussion.

Matthew 19:8, Divorce your wives. Most churches allow for divorce, but some do not permit remarriage under any circumstances. This may seem like an extreme position; however, those who advocate this can make a strong case that this is the Bible’s position.

Some churches teach that divorce and remarriage is acceptable in some instances, but not in others. This is where it gets confusing and depends on one’s interpretations of many clear as well as some unclear biblical passages. The truth is that each marriage and divorce case is unique. Each situation needs to be evaluated case by case based on biblical guidelines. My thoughts (below) on the subject of divorce and remarriage are only general in nature.

The Scriptures say that YHVH hates divorce (Mal 2:16). Why? Because he had to divorce his own (spiritual) wife, Israel, because of her adultery against him (e.g., Jer 3:8). But he’s going to remarry her again, but this time it will be to redeemed Israel, which is a new, spiritually regenerated bride. Furthermore, Yeshua died to pay the price for Israel’s capital sin of adultery. On our website (http://www.hoshanarabbah.org/pdfs/divorce.pdf), I have a teaching about the prophetic implications of divorce where I discuss this issue.

The Torah allows for divorce and remarriage following certain protocols (Deut 24:1–4). Yeshua acknowledges this in the Gospels and accepts this fact due to of the hardness of people’s hearts (Mark 10:4–5).

The issue of divorce and remarriage becomes confusing, since in Matthew 5:32 and 19:9 no one knows the exact meaning of the word “fornication.” Even the Jews of Yeshua’s time debated about its meaning, and the two Pharisaical schools of the day defined pornea (Greek) or ervah (Hebrew, see Deut 24:1, uncleanness) differently.

Luke 16:18 is an interesting passage. Some Bible teachers have proffered the idea that in the Hebrew (if we were to employ a method called back-translating—a somewhat questionable approach to biblical exegesis), the “and” in “and marrieth another” can mean “in order to marry another,” thus showing evil and lustful intent on the part of the one leaving the marriage to marry another person. In that case, it would be adultery. But if their hearts were hard and they had irreconcilable differences, then it would seem that a properly executed divorce would be permissible. Admittedly, this is speculative, but it could be a possible way to interpret Luke 16:18 such that the words of Yeshua don’t contradict the Torah, which allows for divorce—something Yeshua himself admits (Matt 19:8). That a Hebrew meaning could be read into the Greek word for and is possible, since testimony from several of the early church fathers indicates that Matthew was originally penned in Hebrew.

In our congregation, as a pastor, over the years I have married very few people, and have turned down more marriages then I have performed because I had questions about the legal legitimacy of the new marriage (in the case were previous marriages were an issue). When in doubt, I tell the parties involved that they can obtain a legal civil marriage from a judge and we will accept it in our congregation. I will marry them only if I have no doubts that their marriage fits biblical standards of righteousness in accordance with the Torah. Even this, in some cases, can be a very tough judgment call to make.

If a person is currently in a questionable marriage situation when they come to a knowledge of the Torah, I will tell them to repent of their past sins, pray for the blood of Yeshua to cover them, and then go on and live righteously “till death do you part.”

When Yeshua met the woman at well in John 4 who had been married to five husbands and was living with a man who was not her husband at the time, he didn’t condemn her. He basically told her that he was the Messiah, that he could meet her deeper spiritual needs that when met would likely result in the resolution of her personal relational issues. That is my approach as well. Whatever marital state a person is in when I meet them, I instruct them to live according to the Torah and follow Yeshua relying on his grace.

Adultery in the marriage is a difficult situation. Paul is very clear that adulterers will not be in the kingdom of Elohim (1 Cor 6:9); that is, they will not have eternal life, unless, of course, they repent as David did in his affair with Bathsheba. When adultery occurs in a marriage, there needs to be repentance and reconciliation—especially if believers are involved. Reconciliation may require that both receive marriage counseling from a biblically-based marriage counselor. The need for this is even more critical if there are children involved.

A major problem arises when one of the parties refuses to repent and reconcile. At this point, separation or divorce may result. For the party who wants to reconcile, even if separation or divorce occurs, one needs to move slowly and never jump quickly into another marriage. One will need to pray for the unrepentant spouse (or ex-spouse) in hopes that YHVH will soften the ex-spouse’s heart, bring a spirit of repentance to all the parties resulting in reconciliation. If after a period of time (perhaps several years) reconciliation seems impossible (especially if the party who refuses to reconcile remarries), then I believe that one is free to remarry, but they must do so following biblical criteria.

Clearly, the Torah allows for divorce and remarriage (see Lev 21:7; Deut 24:1–5). Yeshua acknowledges the reality of divorce. Why? Because it is not a perfect world and people become hard of heart. Issues such as fraud, adultery, abuse, abandonment, criminality, substance abuse (e.g., drugs and alcohol) often arise that make a marriage impossible. Good and well-intentioned people sometimes fall victim to bad people and bad situations. That’s just the reality of the human condition whether we want to admit it or not—even if it goes against YHVH’s highest ideal for marriage or not. As such, we have to deal with the realities.

If you have read my Torah teachings, you’ll see that there is a possibility that Moses divorced Zipporah and remarried the Ethiopian woman. In ancient times, many men didn’t divorce their wives, they just married another wife and kept adding wives. Although polygamy was not YHVH’s ideal, he nevertheless tolerated it, though it caused no end of problems and grief for families and marriages. I see modern divorce to be similar to polygamy. Instead of keeping the disfavored wife, “moving her to the back burner” of the family situation and getting a new wife, one simply divorces one’s wife and gets a new one. In a real spiritual sense, one is still spiritually and emotionally attached to their former spouses after they’re remarried. This is similar to polygamy except one is not living with one’s ex-spouses.

16 thoughts on “Why did Yeshua allow Moses to permit divorce?”