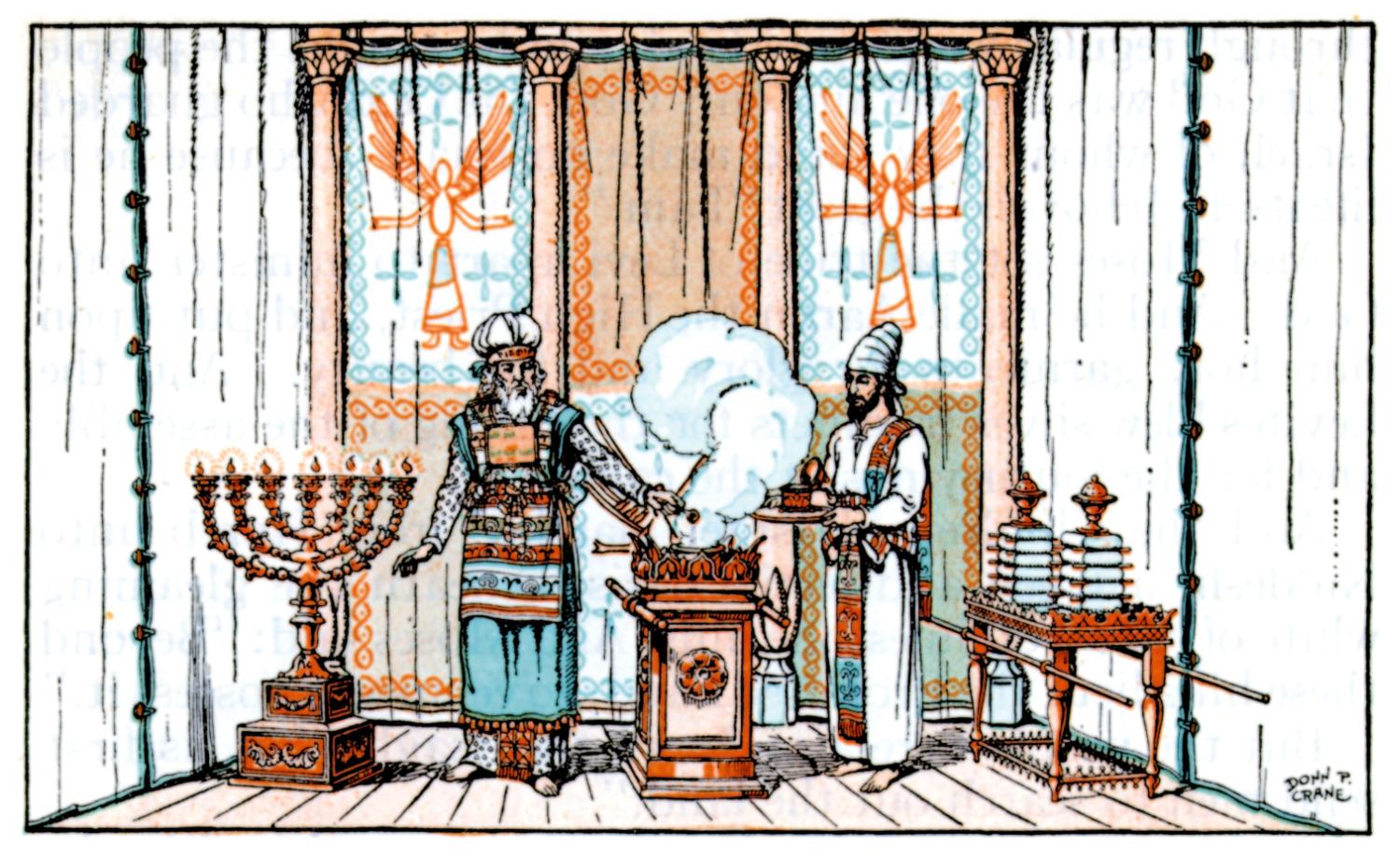 This coming Wednesday is Yom Kippur. Are you ready?

Yom haKippurim (literally, the Day of Atonements, plural) is not a one-time thing. The redeemed believer is covered by the blood of Yeshua at the time of their initial salvation, but needs additional covering every time they sin. We need this covering of blood on an individual and collective basis.

This pattern was set in Leviticus 16 when on the Day of Atonement, the high priest made atonement for his sins, those of his family, of the nation and even the Tabernacle of Moses itself due to defilement cause by men’s sins.

We’re all in this thing together. My sin affects you and vice versa. My sins are passed on down to successive generations, and unless I break the sin cycle through the means that YHVH has provided, this sin cycle will continue as it has from Adam to this day bringing corruption, ruination, division, strife and death to all men.

The English word atone means “to make amends or reparation of wrong or injury.” Atonement biblically means “to cover, purge, make an atonement (Heb. kaphar), make reconciliation, cover over with pitch.” As with many Hebrew words, kaphar means not only to cover over sin (by the blood of the Lamb), but it means “to reconcile and purge.” When we sin, we need the forgiveness of Yeshua and his blood to pay for or to cover over our sin debt. We also need to get purged of the inclination to sin in the first place. We also need to make amends with those we’ve injured in the process of sinning—to reconcile with them, to repair the damage, and to mend the breach in the relationship. When we sin, a breach occurs both on the vertical level (with Elohim) and  on the horizontal level (with our neighbor). Each of us is a broken, damaged and hurt person, and we have a hard time mending the damage we’ve caused to others, which is a painful process, but one which yields rich results in healing wounded relationships including the wounds and brokenness of our own heart. We must humble ourselves to do this. Pride and self protection prevents most us from repenting and asking forgiveness of Elohim and of others. To come into the presence of YHVH, we must take the step. Yom Kippur pictures our taking this step.

Some Bible teachers have taken the word atonement and have made a word play out of it by turning it into at-one-ment. This play of words isn’t totally without merit, since the word atone comes from a Middle English word meaning “to make or become united or reconciled” or literally “to become at one with someone else.” There’s a lot of at-one-ment that needs to occur between people and their Heavenly Creator! The older I get, the more I realize this!

Broken relationships of all kinds are only restored slowly.

In Acts 3:21, Peter relates the restoration of all things to the second coming of Yeshua. Many things need to be restored between men and YHVH, between individuals, between families, tribes and nations. This can only happen when men recognize that they’ve sinned against YHVH by breaking his commandments and because of pride, selfishness, egos and the like, which brought have pain and destruction on this planet. Only through faith in Yeshua and repentance of sin and his blood covering us and then all men coming into agreements with the need to follow YHVH’s standards of Torah-righteousness will there ever be reconciliation and atonement between men.

The Day of Atonement and the Tabernacle of Moses

The Tabernacle of Moses is about restoration, reconciliation, healing and at-one-ment. It’s about healing the breaches between men and ultimately man and Elohim.

With regard to the Tabernacle of Moses, before entering the tabernacle compound, the individual had to first come to the altar of the red heifer outside the tabernacle and get cleansed from the sting of death, which is sin by the death of Yeshua on the cross. This is pictured by Passover during the day portion of the month Nisan or Abib fourteen in the mid-afternoon when the Passover lamb was sacrificed.

Now that the redeemed believer has been purified ritually from sin, he is now able to come into the tabernacle’s outer courtyard where he first encounters the altar of sacrifice representing the idea that he must keep walking forward spiritually with the cross continually in his full view. At the altar, he must eat Yeshua’s flesh (the Word of Elohim) and drink his blood (stay under the blood) for the rest of his life. He accepts Yeshua as Savior and Lord or Master of his life. This means that when he sins (goes against the Yeshua’s word or commandments) subsequent to initial salvation, he must return to the altar for cleansing forgiveness. Passover during the evening of Abib fifteen (during the Passover seder), which also occurs at the beginning of the first day of the Feast of Unleavened Bread is a picture of this.

Next in his progression into the Tabernacle of Moses, the redeemed believer comes to the bronze laver symbolizing baptism for the remission of sins, receipt of the Holy Spirit and cleansing or washing in the water of the Word of Elohim. The last high holy day of the Feast of Unleavened Bread symbolizes this step.

To this point, the redeemed believer has only been in the tabernacle’s outer courtyard, which pictures cleansing from sin, redemption and orienting one’s life around obedience to Yeshua. After this, the redeemed believer is ready to enter into the tabernacle sanctuary itself, which is a spiritual metaphor for entering into a more intimate relationship with Yeshua the Messiah now that one is totally committed to following the Lord.

Once inside the tabernacle, the first station one comes to is the golden menorah. There, the Torah is written in one’s heart and after having received the Holy Spirit at the bronze laver, one is now able to live out the Torah from a heart of love and faithfulness. Torah-obedience shows us to love Elohim and one’s fellow man. As one walks out the Torah under the power of Holy Spirit (i.e., Yeshua living his life in us) the believer will manifest the fruits and gifts of the Holy Spirit in his life. In so doing, he becomes a spiritual light to those around him. The manifestation of the love of Yeshua and the other fruits of the Spirit in his life attracts people to the gospel message and by the power of the Spirit, the people, like an agricultural harvest, are reaped and brought into the kingdom of Elohim. This is the regathering of the lost and scattered Israel that Yeshua said it was his and our mission to gather (Mat 15:24; 10:6 cp. Acts 1:7–8). The Feast of Weeks or Pentecost is a picture of this.

Next, now that many redeemed believers are beginning to be united in Yeshua by the Holy Spirit’s work, it is time for the redeemed believer to march forward into YHVH’s presence not just as a solo individual, but as a body of redeemed believers. This is regathered, reunited and redeemed Israel coming before the King of Heaven through Yeshua. The next furnishing in the tabernacle is the table of showbread, or, more accurately, the table of (YHVH’s) presence or face. This pictures all the twelve tribes of Israel coming together in YHVH’s presence in a pure, sin-free or spiritually unleavened or deleavened state. All the tribes of Israel are of equal status before YHVH — one tribe isn’t above the other. That’s why the loaves of unleavened bread are aligned in two stacks six each on the table. This is pictured by the Day of Trumpets when Yeshua will descend from heaven and regather his elect at the first resurrection to meet him in the air at his second coming.

Next we come to the altar of incense just in front of the veil separating the holy place from the holy of holies. There the tribes of Israel (redeemed Israel or the one new man, see Eph 2:11–19) prepare to enter into the kingdom of Elohim in the fuller sense of the concept through the blood of the Lamb of Elohim and through prayer, praise and worship. No one comes through the veil into the throne room of Elohim except through the blood of Yeshua the Lamb of Elohim and through praise and worship! Redeemed Israel comes into YHVH’s presence as a united group comprised of many redeemed individuals, as a spiritual family, a nation comprised of twelve tribes all singing YHVH’s praises and worshipping him on bent knees with a humble heart. This is pictured by the Day of Atonement. This is the spiritual bride of the King preparing herself in robes of righteousness, a sin-free nation, getting ready for its marriage to Yeshua, the King of kings.

After this, one is ready to enter the veil into the most holy place of all where the ark of the covenant is located. This is a picture not only of King YHVH-Yeshua’s throne room, but of his bridal chamber as well where the King and his bride — redeemed Israel — are married and cohabit. From there they will rule over all Israel and the world during the kingdom of Elohim on earth for one thousand years, which is also known as the Millennium (Rev 20:4–6). The Feast of Tabernacles pictures this.

Finally, after the Feast of Tabernacles or the Millennium comes the Eighth Day holy day representing the New Jerusalem coming out of the New Heavens onto the New Earth (Rev 21 and 22). Above the ark of the covenant and the entire Tabernacle of Moses is the glory cloud picturing the very presence of YHVH Elohim. Not only is eight the number of new beginnings but also of eternity. The New Jerusalem is the spiritual habitation of the glorified saints who make up redeemed Israel who will live with YHVH-Yeshua forever in the heaven on earth called the New Jerusalem.

Passover is about the healing of and bringing redemption to the sin-sick individual and restoring him into a spiritual relationship with their Creator.

The Day of Atonement, on the other hand, is about healing the sin-sick nation comprised of many redeemed individuals and restoring it to a relationship with the Creator.

YHVH starts with individuals then moves out to the nation. He started with Abraham and created a nation from one man. He started with Yeshua, the Seed of Abraham, then the twelve disciples, and then the seventy, then the seventy nations of the world. He told his disciples to start in Jerusalem, then move to Judea and from there to go to the whole earth in regathering the lost sheep of the house of Israel (Act 1:7–8). Are we part of this process of healing that YHVH initiated through the death of Yeshua on the cross? Are we part of the solution or, because of our stubborn pride, part of the on-going problem?

For a full teaching article on Yom Kippur, go to http://www.hoshanarabbah.org/pdfs/yom_kippur.pdf

5 thoughts on “Time to Prepare for Yom Kippur”