Luke 18:2, A judge. In this parable of the Persistent Widow and the Unjust Judge, Yeshua is using a Hebraic form of reasoning or argument called kol v’khomer where a point is made from a lesser weight to heavier weight. In other words, if premise A is correct, then how much more so is premise B correct? 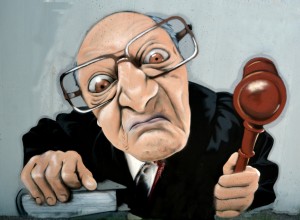 In the Jewish religious thinking of the first century, this is one of the seven laws of biblical interpretation of Hillel the Great (ca. 32 b.c. to A.D. 7) who was one of the greatest Jewish religious leaders of Yeshua’s day. In this parable, Yeshua is making the point that if an ungodly, secular judge who cares little about the needs of a widow will grant her wishes because of her persistent pleas for justice against her enemies, how much more will Elohim hear and answer the prayers of his elect saints who have faith in him and cry out to him continually to avenge them of their enemies.

A day of judgment is coming when the scales of justice will be balanced in favor of the saints of the Most High Elohim, the Just Judge of the universe. Certainly Elohim presently attends to the needs of his servants and gives them victory over their enemies in many small ways. But many believers are still suffering greatly at the hands of the wicked who don’t fear Elohim. However, the day is coming when YHVH will move with a mighty hand and universally avenge his servants of all their enemies small and great. Until then, the righteous martyrs continue to cry out asking Elohim, “How long, O YHVH, holy and true until you judge and avenge our blood on those who dwell on the earth?” (Rev 6:10). His answer to them is to wait just a little longer (verse 11), for the great day of YHVH’s wrath, the wrath of the Lamb, which is coming upon the wicked (verse 17) is coming soon. Until then, YHVH promises to never leave nor forsake his servants (Heb 13:5), so be strong in him!