John 5:18, [Yeshua]… broke the Sabbath. Listen to an interesting and sad, but true story. Many years ago, I was in a meeting where a Christian Bible teacher was giving a message on the end times. In the middle of his teaching and totally out of context, he quoted this passage from John and claimed that Yeshua broke the Sabbath. There was a rustle in the audience of about 300 people. A little later, he made the same statement again and began to deride the Sabbath. This time there was an audible moan from some in the audience — many of whom were Sabbath keepers. A feeling of being hit in the gut went through me. A little later, he made the same statement again, and continued to bash Sabbath observance. This time, I could hold my peace no longer, and I stood up and challenged him in the middle of the meeting. I told him that to say that Yeshua had broken the Sabbath was to call Yeshua a sinner, and that Yeshua had not broken the Sabbath, but some Jewish legal traditions (or halakhah) pertaining to the Sabbath. The speaker was flustered and had no response, and the host of the meeting decided to take an intermission.

A year later, it was announced that this Bible teacher had suddenly and unexpectedly dropped dead in the pulpit while preaching. One can’t help but wonder… 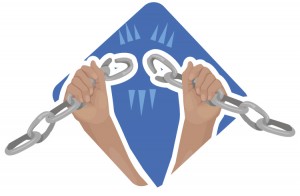 Had this false teacher simply pulled down a concordance from his bookshelf and looked up the word broke in the Greek, and had read John’s statement in verse 12 in the context of verses 8–10, he wouldn’t have been teaching this blasphemous heresy about our Master and Savior!

Here is the explanation of this passage: The word broke is the Greek word luo meaning “to loose, untie someone or something bound, to dissolve, destroy.” According to The Theological Dictionary of the NT, luo means “to free from prison, open something closed; destroy fetters, foundations, walls; to release.”

What Yeshua was breaking was the Jews’ extra-Torah legal traditions that made the Sabbath a burden by prohibiting the alleviation of human suffering and need on this day (John 5:8–10). He was in no way violating the actual Torah, since there is no Torah-law prohibiting healing on the Sabbath or carrying one’s bedroll.

In attempting to follow the Torah through men’s traditions, many of the Jews of Yeshua’s day had actually omitted the weightier matters of the Torah (justice, mercy and faith, see Matt 23:23), and had forgotten that YHVH is more concerned with heart issues rather than religious legalism, since he desires mercy over sacrifice, and the knowledge of Elohim over burnt offerings (Hos 6:6).