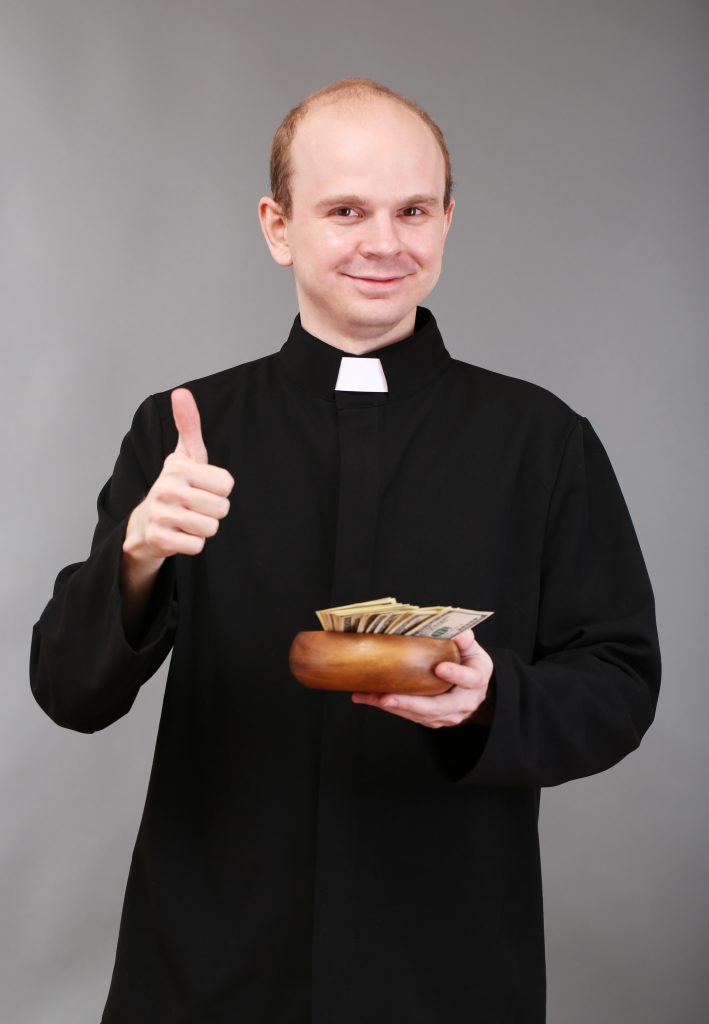 2 Corinthians 2:17, Peddling the word of Elohim. Are you as sick and fed up with peddlers of the Word of Elohim as I am? It’s everywhere you go—people standing along the highways of biblical religion with their hands out panhandling. Even in Paul’s day as in our, the ministry of the gospel has “many” gospel peddlers.

Show me just about any big name in Christianity, Messianic, the Hebrew Roots Movement and, in most cases, I’ll show you someone who has built their ministry on shameless self promotion, hype, glitz, corporate marketing techniques and their ability to cleverly woo people to their book seller’s table or website that is chalk full of wares that promise to fill your head with the latest prophetic insights, esoteric biblical head knowledge, pop-psychological, self-help, humanistic, new-age, ear-tickling pap. It’s all yours, if you’ll only plunk down some of your hard-earned cash.

Well, I’m not the only one who’s fed up with these modern-day merchandizers of the gospel. The Apostle Paul was too. Evidently it was rampant in his day as well as we have seen in the scripture verse quoted above: “For we are not, as so many, peddling the word of Elohim…” The word peddling there means “to be a retailer, to make money by selling anything, to get sordid gain by dealing in anything, to do a thing for base gain, to trade in the word of God, to try to get base gain by teaching divine truth, to corrupt, to adulterate, peddlers were in the habit of adulterating their commodities for the sake of gain.”

These guys don’t need to bother knocking on the door of the congregation I pastor, nor at the events our ministry sponsors. The welcome mat isn’t out for them!

Haven’t these spiritual beggars read the word of Elohim? Don’t those who support them know that this was not the way of Yeshua and the apostles? How many examples in the Bible are there of the true servants of Elohim peddling the Word of Elohim, and then living off the proceeds? None! Didn’t Yeshua tell his disciples when he sent them out to preach the gospel, “Freely you’ve received, freely give?” (Matt 10:8). What about this don’t we understand? Remember how Yeshua turned the money-changers tables over in the temple, and how he lambasted the greed of the Jewish religious leaders of his day who “devoured widows houses” (see Matt 21:12; 23:14)? Sadly, little has changed in religious circles since then.

Now I’m not opposed to people freely and without coercion giving to ministries who feed them by preaching and teaching the Word of Elohim. This is totally copacetic to the biblical norm. But selling, peddling and merchandizing is another thing. Of course, none of the offending parties are doing this are they? Just ask them, as they adroitly polish their 14 karat gold-plated hallows. The problem is that the gold plating is wearing thin, and the pot-metal is showing through. The discerning person see this and avoids such people.

The truth of Elohim cuts like a sword to reveal these characters for who and what they are—soulish, greedy, carnal and lazy bums who desire to live of the fat of YHVH’s sheep instead of submitting to the Spirit, truth and Word of YHVH Elohim (Heb 4:12). Go read, if you dare, what the prophet Ezekiel had to say about these guys in Ezekiel 34. YHVH’s judgments are coming against them (verse 20)! This is an end-times prophecy (see verses 23–25).

Other scriptures deal with this issue as well. Speaking of the qualifications of a spiritual overseer, Paul writes,

Not given to wine, no striker, not greedy of filthy lucre [covetous]; but patient, not a brawler, not covetous… (1 Tim 3:3)

Speaking of the qualifications of a spiritual overseer, Paul writes,

Likewise must the deacons be grave, not doubletongued, not given to much wine, not greedy of filthy lucre [money]… (1 Tim 3:8)

For a bishop must be blameless, as the steward of God; not selfwilled, not soon angry, not given to wine, no striker, not given to filthy lucre [money]… (Tit 1:7)

Whose mouths must be stopped, who subvert whole houses, teaching things which they ought not, for filthy lucre’s sake [dishonest gain].”(Tit 1:11)

Feed the flock of God which is among you, taking the oversight thereof, not by constraint, but willingly; not for filthy lucre, but of a ready mind… (1 Pet 5:2)

Interestingly, the problem of spiritual pan-handling peddlers and money-grubbers persisted in the early church even after the death of Paul. The Didache, which is one of the earliest, non-canonical documents that exists from the apostolic age from the late first-century A.D., contains some warning, which are as cogent in our day as then. It lays down some guidelines pertaining to the traveling Bible teachers of that day, which we would do well to follow.

Let every apostle [and prophet] that comes to you be received as the Lord. And he shall remain one day, and if there be need the second also; but if he remains three days, he is a false prophet. And when the apostle departs let him take naught, save provision of bread till he be lodged. But if he ask for money, he is a false prophet.

2 Corinthians 3:7, Ministry. Greek: diakonia meaning “service, especially those who execute the commands of others.”

Ministry of death. Is this a reference to the Torah? If so, which aspects? Just previously in verse six, Paul is speaking about the new covenant and the letter bringing death and the spirit bringing life. What is he referring to here? Is the spirit of the Torah-law all that is applicable to the believer today, and not the letter? If so then why did Yeshua in his Sermon on the Mount excoriate the Jews for keeping the letter and not the spirit of the Torah? In fact, he strongly affirmed that his disciples must keep both the letter and the spirit. To keep only the spirit would be tantamount to saying it’s all right to murder as long as you don’t hate the person, commit adultery as you don’t lust in the process, and so on. It is plain to see that his notion is absurd. Yet this is what many Christians believe. We must keep the spirit, but don’t have to keep the letter of the law, and they will use this passage of Scripture to justify their belief. If this is not what Paul meant here, then what is he talking about when he is favoring the spirit of the Torah over the letter?

In this passage of Scripture, Paul references the stone tablets containing the Torah that Moses brought back the second time from Mount Sinai. Some aspect of this Torah (i.e., “the ministry of death”) brought the curse of death. Was it the Torah law itself, which tells man how to love Elohim with all of his heart, soul and strength and his neighbor as himself that brought death? It seems inconceivable and counter to the Torah itself that Paul would be referring to the aspect of the Torah that tells a man how to love his Creator and fellow man as causing death. After all, the Torah itself tells us that if a man follows the Torah, he will live and that Torah brings life (Deut 30:15, 19) ­­— not death. Conversely, disobedience to the Torah (or Torahlessness) is considered death (Ibid.). So, in Paul’s mind, if he is to stay consistent with the Scriptures, Torah-obedience can’t be considered causing death. So what aspect of the Torah is Paul referring to then that kills? He must be referring to the penalty imposed on one for violating the Torah. Violating the Torah brings penalties and curses and sometimes even the death penalty (Deut 27 and 28). Elsewhere, the Scripture tells us that sin is Torahlessness (1 John 3:4). Moreover, the person who sins ultimately brings on himself the death penalty (Ezek 18:4; Rom 6:23) if he fails to place his faith in Yeshua and repent of his sins or violation of YHVH’s Torah-laws (Rom 6:23–26; 1 John 1:9).

What is Paul saying here? Quite simply this. YHVH gave to the children of Israel a glorious legal system at the birth of that nation. A nation needs a legal system to be a nation of law and order. No other nation to that point had ever received such a legal system directly from the Creator of the universe himself. Not the Egyptians, Sumerians, Akkadians, Babylonians, Assyrians, Persians, Greek, Romans or anyone else. How glorious is this that the Almighty would give humans a legal code, so they wouldn’t have to figure one out themselves by trial and error, or borrow a flawed one from some other nation?

At issue here is that this legal code, as do the legal codes of all nations, came with penalties for violation of it. Depending on the crime, the Torah prescribed different penalties for different crimes. Some penalties were minor, some were intermediate, and some crimes carried the death penalty. Every crime or sin had a punishment. This penal system was “the ministry of condemnation.”

This penal system changed with the arrival of the new covenant. Yeshua who ushered in the new covenant died in our place to pay the penalty for all of our sins. How did this work? Simply this. If a man places his faith in Yeshua and repents of his sins, he can have all of his past sins washed away along with the penalty for those sins, which is eternal death in the lake of fire. Through faith in Yeshua, the cleansing of sin, and having Yeshua’s righteousness imputed to a person along with the help of the Set-Apart Spirit living inside of a person, one can actually live a Torah-obedient life. If one stumbles along the way and sins, all one has to do is repent of that sin and go forward endeavoring not to sin again with YHVH’s help (1 John 1:9). How glorious is this?

As glorious as the previous Torah legal system was under the former covenant, the new covenant is much more glorious, since it allows humans to attain to immortal life and inclusion in the kingdom of Elohim as his spiritual sons and daughters. That’s why Paul could say that “the Spirit [referring to the YHVH’s Set-Apart Spirit] gives life” (1 Cor 3:6). Paul goes on to say that “where the Spirit of YHVH is, there is liberty” (v. 17). Liberty from what? From the Torah, so now we can now violate the Torah with impunity without suffering the consequences, or liberty from the ultimate penalty of violating the Torah, which is death? To be consistent with the Word of Elohim, only the later can be true, not the former, or else the Word of Elohim is inconsistent and is a lie and we’re all lost spiritually and without any hope of redemption.

4 thoughts on “Are you as sick of gospel peddlers as I am?”