Happy Chanukah/Hanukkah! Tonight begins the first night of the Festival of Lights. Want to know more? Please read on…

John 10:22, The Feast of Dedication [or consecration]. This is a reference to the annual Chanukah (also spelled Hanukkah, and also known as the Festival of Lights) celebration lasting for eight days beginning in the 25th day of Jewish month Chislev (in the middle of our December). This minor Jewish feast was instituted by Judas Maccabaeus (164 BC) in memory of the cleansing of the Jerusalem temple from its desecration by Antiochus Epiphanes, the pagan Greco-Syrian king.

The word Chanukah derives from the Hebrew word KH-N-K meaning “to dedicate.”

While Chanukah isn’t a biblically commanded observance, it is interesting to note that Yeshua happened to be at the temple in Jerusalem at this time as John mentions in his Gospel (John 10:22). Are there any spiritual significances to this? Perhaps.

Chanukah falls in the same time frame as the modern Christian festival of Christmas, which has its roots in the pagan Roman festival of Saturnalia, which culminated on December 25. Saturnalia was a pre-Christian festival held from December 17 to 25 in honor of the sun god characterized by drunken revelries, sexual debauchery, hedonistic indulgences of all sort, and human sacrifices. Saturnalia was a festival of lights in an effort to defeat the forces of darkness at the darkest time of the year and to woo the sun as earth’s life-giver back again thus insuring that the earth wouldn’t become an uninhabitable dark and frozen wasteland.

In the fourth century, Christian leaders “redeemed” Saturnalia by attaching the birth of Jesus to December 25, the last day of this pagan festival. They hoped that by turning Saturnalia into a Christian holiday the pagans would embrace Christmas over Saturnalia and thus convert to Christianity. Christmas became a sort of outreach program to the pagans. The problem is that the new Christians, while embracing Catholic Christianity, still hung onto many of their pagan traditions associated with Saturnalia and melded them with Christmas. Little-by-little, the pagan traditions from other heathen cultures (e.g., the Christmas tree, Santa Clause, mistletoe, the yule log, red and green greenery) were assimilated into the celebration of the birth of Yeshua, and Christmas has become what it is today—a hodgepodge of biblical truth and pagan traditions.

While what became know as Chanukah originally started as a Jewish revolt against a program by the pagan Greeks to force the Jews to forsake the Torah in favor of heathenism, by contrast, the early Christian Catholic leaders attempted to use Christmas as a substitute for Saturnalia. As a result, Christmas became a syncretistic melding of the two. So while Chanukah represents the putting away of pagan practices and the defilement associated therewith and the cleansing of YHVH’s temple, Christmas has assimilated many pagan practices (e.g., from the ancient Romans, the Celts and Druids, and the Germanic tribes) and subsequently has brought these practices into the Christian religion.

It is interesting to note that both Chanukah and Christmas have lights as a main theme. For the Jews, the Chanukah lights represent the lighting of the menorah in the newly re-dedicated temple in Jerusalem and its miraculously burning for eight days on one day’s supply of oil. For the pagan Romans, Saturnalia was about appeasing the evil god that was attempting to plunge the earth into darkness at the time of the winter solstice, while, at the same time, wooing back the good sun god who was responsibility for earth’s warmth, light, life and fertility. For the Christians, Christmas is about the birth of Yeshua, the Sun of Righteousness (Mal 4:2), who is the Light of world (John 8:12; 9:3; 12:44), the Light of truth and the Way to the Father in heaven.

Although the origins and reasons behind Chanukah and Christmas are completely different, and, in some respects, opposite to each other, the one thing that these two festivals have in common, as noted, is the idea of light. For the Jews, Chanukah is about the rededication of the temple with the lighting of Menorah—the eternal flame or light of YHVH Elohim, which, interestingly, as we shall see, points to Yeshua. For the Christians, Christmas is about Yeshua, the Light of Elohim coming to this earth as the Savior of mankind and as the Sun of Righteousness or Light of the world.

Can we find any spiritual connections between Chanukah’s preoccupation with light with that of Christmas lights? Possibly.

Most informed people know that Yeshua was not born on or near December 25, but more likely during the fall—probably at the time of the biblical Feast of Tabernacles (Heb. Chag Sukkot). This would mean that Yeshua was conceived by the Holy Spirit in the womb of the virgin Mary some nine months earlier around the time of Chanukah and Christmas. That means that Elohim so loved the world that he begot or conceived his Son, Yeshua, the Light of the world, in the womb of Mary during the darkest time of the year in month of December. 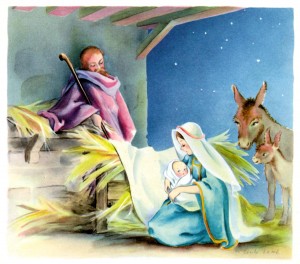 Around the time of Yeshua’s birth, both Zachariah and Simeon prophesied that Yeshua would give light to those who sit in darkness, in the shadow of death (Luke 1:79;  2:32, a quote from Isa 9:2). What’s more, one of the greatest prophecies in the Tanakh is that of Balaam who prophesied concerning the coming Messiah, that “there shall come a Star out of Jacob, and a Scepter shall rise out of Israel (Num 24:17). As we all remember, the shepherds saw a great light around them when the angels announced the birth of Yeshua (Luke 2:8–9). Moreover, the wise men from the East were led by a star to the young Yeshua (Matt 2:1–2). All these biblical references relate to Yeshua and heavenly light.

Now let’s tie the pieces together to see what Chanukah and Christmas have in common with regard to Yeshua the Light of the World.

We believe that Yeshua, the Light of Elohim, pierced the darkness of this earth and the darkness of a woman’s womb at the darkest time of the year in December (assuming Yeshua was conceived in Mary’s womb at this time) during the season of Chanukah and Christmas. Additionally, when Yeshua the Light of the world had became an adult, he went to the temple in Jerusalem to cleanse it of its defilement from an apostate religious system (Matt 21:12; Mark 11:15–17).

What can we learn from this? Whether we celebrate Chanukah or Christmas, let’s focus on Yeshua, who is the spiritual Light of this world, and let us all cleanse the spiritual temples of our lives (1 Cor 3:16–17; 6:19; 2 Cor 6:14–18) of anything (including non-biblical pagan traditions) that defiles us and prevents us from fully loving, obeying and worshipping Yeshua the Messiah in spirit and in truth.

8 thoughts on “Chanukah or Christmas, Neither or Both?”