Gather my saints together unto me; those that have made/cut a covenant with me by sacrifice. (Psalm 50:5

Psalms 50:5, Made/cut a covenant…by sacrifice. This refers to the method by which covenants were made in ancient times between two parties. This same ritual occurred when YHVH made (or cut) a covenant with Abraham in Genesis chapter 15 except that YHVH took all the responsibilities for fulfilling the covenant upon himself, for Abraham was asleep when this covenant was cut (Gen 15:9–10, 12). All Abraham had to do was to have faith in YHVH and all the blessings of the Abrahamic Covenant would fall upon him (Gen 15:6). We know from Paul’s discussion in Romans chapter four that the Abrahamic Covenant is the original biblical model for how an individual can receive salvation from Elohim. We also know that when YHVH made his covenant with Abraham, the vision Abraham had while he was asleep prophetically pointed to Yeshua’s death on the cross and his initiating the new/renewed covenant as prophesied in the Tanakh (e.g. Jer 31:31–33; also see my discussion of Gen 15:12–21 at Abraham’s vision). Yeshua at his last supper and subsequent crucifixion fulfilled this ancient prophecy as well as the spiritual types and shadows discussed in Psalm 50:7 and Genesis 15:9–21. At his last supper, Yeshua made a new covenant with his disciples through his body (the bread) and blood (the wine), which redeemed believers now commemorate when they take communion.

And as they were eating, Jesus took bread, and blessed it, and brake it, and gave it to the disciples, and said, Take, eat; this is my body. And he took the cup, and gave thanks, and gave it to them, saying, Drink ye all of it; for this is my blood of the new testament, which is shed for many for the remission of sins. (Matt 26:26–28)

Prior to his death on the cross, Yeshua’s predictively explained the significance of his broken body and spilled blood as it relates to covenantal agreement between him and those who would place their faith in him (as Abraham did in Gen 15).

35And Jesus said unto them, I am the bread of life: he that cometh to me shall never hunger; and he that believeth on me shall never thirst.…47 Verily, verily, I say unto you, He that believeth on me hath everlasting life.…50 This is the bread which cometh down from heaven, that a man may eat thereof, and not die.53 Then Jesus said unto them, Verily, verily, I say unto you, Except ye eat the flesh of the Son of man, and drink his blood, ye have no life in you.…58This is that bread which came down from heaven: not as your fathers did eat manna, and are dead: he that eateth of this bread shall live for ever. (John 6:35, 47, 50, 53, 58)

In the context of the Passover service when the saints through the ritual of communion annually commemorate Yeshua’s “cutting” the new covenant with his saints and then ratifying that covenant through his death, Paul has the following to say about the significance of Yeshua’s body:

Those who carelessly take communion are literally disrespecting not only the high value of the covenant that was made (or cut), but the tremendous price of making a covenant with Elohim (i.e. it cost Yeshua his life, and the believer must also die to himself as he accepts, unconditionally, Yeshua as his Lord and Master). Moreover, careless partakers of communion are not only underestimating the cost of their salvation, but the value and the benefits of that salvation, which is spiritual rewards including eternal life. Elohim is not only not duty bound to give immortality to such people, but would be foolish to immortalize people who don’t sufficiently recognize and appreciate the cost and value of covenantal agreement. In doing so, he would risk having another rebellion on his hand at some point in the future. 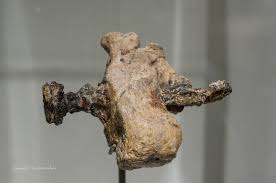 An ancient relic of crucifixion.

So when Yeshua died on the cross, he become the sacrifice that was cut (i.e. his body was brutally mutilated prior to and during his crucifixion) to which this verse in this Psalm 50 makes allusion.

At the same time, those who don’t place their trust in Yeshua by accepting the covenant he “cut” through his death on the cross and then by backing that faith up with good deeds, or those who have “accepted” Yeshua, but lightly esteem him, will have a terrible price to pay.