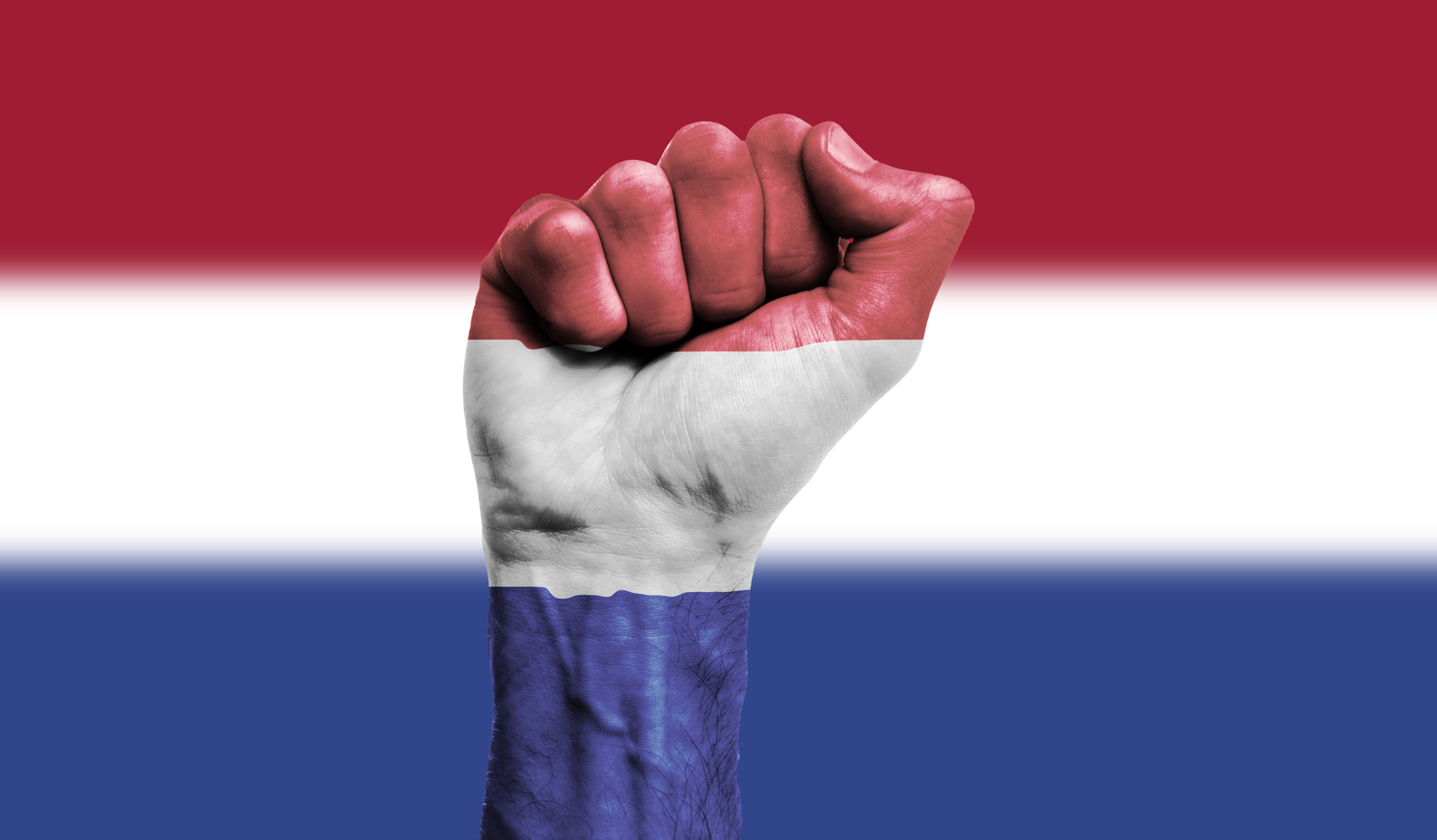 The raised Antichrist, secular humanist fist of rebellion and defiance against YHVH Elohim

Way back on March 18, 2003 when I had a weekly Hebrew roots teaching program on Christian radio station KKPZ, I put out what I called “A Wake Up Call to the Body of Messiah in America.” That small radio station in Portland, Oregon wasn’t much of a platform to put out such a message, but I used the meager resources YHVH had put at my disposal at that time.

In that message I said,

A righteous remnant of end time spiritual warriors has been fighting an uphill battle against immorality, abortion, rebellion against YHVH’s biblical laws, humanism, Marxism/socialism, Eastern “spirituality”/New Age, and the global takeover by a consortium of political and corporate fascists commonly called the New World Order or biblically known as Babylon the Great. The latest addition to this list is the Antichrist religion of Islam and antisemitism. Both are presently raising their demonic heads in the traditional Judeo-Christian nations of Europe and America. Islam began knocking on the spiritual door of America a few decades ago, and now because of the large numbers of Moslems in this country, Islam has become a threat worth noting. The goal of Islam is definite, for the Koran states it clearly: to take over the world and to dispossess both Christians and Jews of their lands, property and, if necessary, their lives.

As a nation, we find ourselves in this situation because we turned our back on Elohim, and have failed to repent of the sins. Now the judgment of Islam and along with the illegal alien invasion is coming against us (as allowed by Elohim) to hopefully wake us up and drive us to our knees before our Father in heaven. These curses are coming against America because of its moral and spiritual weakness. Like biological pathogens, these threats to America are feeding on the physical and spiritual body politic of this nation because its spiritual immune system has been seriously compromised due to moral and spiritual declension due to its weak, hireling and apostate spiritual leaders.

I then went on to issue a wake up call to America’s Christian leaders and laity, and I identified the specific sins that would bring Elohim’s judgment on America.

Then in September 2007 at our annual Feast of Tabernacles gathering on the southern Oregon coast before about 120 people, I gave out my teaching entitled, “Is America in End-Time Bible Prophecy? What Scripture Prophesies Will Happen to America Economically, Politically, Militarily and Spiritually Just Prior to the Second Coming.” In that teaching, the written form of which I published and has been on the front page of our ministry website ever since (https://www.hoshanarabbah.org/pdfs/america.pdf), I warned and predicted that Edom (the Moslems) and its Marxists, leftist sympathizers and allies would attempt to take over America because of apostasy and lukewarmness in the Christian church. I predicted, based on my understanding of the Scriptures, that Elohim would use Edom/Islam et al as a giant paddle to spank America (and other western formerly Christian nations as well) for turning away from him. These would be judgments unto repentance. Most, I predicted would remain asleep, but some would wake up spiritually and that there would be a small, remnant spiritual revival, to one degree or another. I even predicted, again based on my understanding of the Scriptures, that, on a limited scale, there might even be some nuclear bombs that would be lobbed into the U.S. by its Edomite enemies or their allies. This was well before nations like Iran and North Korea had the atomic bomb! At this time, Hillary Clinton was running for president against the relatively unknown Barak Hussein Obama. It looked as if Clinton would definitely win the Democratic Party nomination and go on to become the president of the U.S. In my teaching at the Feast of Tabernacles, I predicted that if Obama  won (a long shot), it would fulfill Bible prophecy, since Edom would now be in the White House as a judgment against backslid “Christian America.” Well, Obama did win, and the rest, as they say, is history. Now the predominant daily headlines in the news either pertains to LGBTQ or Moslem rights movement in America that has, since then, gained great traction.Obama, as Time Magazine announced in bold headlines on the cover of its magazine after the Obama victory, was “America’s First Gay President” and, I might add, a Moslem sympathizer as well.

Then in the spring of 2013, I preached a sermon at our congregation entitled, “Islam, God’s Judgment on Christians to Bring About Revival,” the video of which I put up on our YouTube channel. The title says it all. No further explanation is needed.

Then at the Feast of Tabernacles in the fall of 2013 before about 50 people, I gave a teaching entitled “The Underground Church Is Coming to America,” which I subsequently published as a video on the Hoshana Rabbah YouTube channel. There I predicted that the Antichrist, Elohim-hating leftists and Edomites in America would gain power and then marginalize the Christian church and drive it underground. This would occur because of the weakness, apostasy and lukewarmness of the church in America.

Then a yesterday on this blog, I put up a piece entitled “Are We Experiencing a Leftist Revolution in America?” of which this article is part two. In that post, I have had to come to the reality that the leftists are making a play to take over this country and to turn it overtly into a fascist state—a European democratic socialist republic with the God-haters (secular humanist “progressive” leftists and Edomites) running everything to the main detriment of Bible believers.

In the last two days, I have talked to several of my spiritual counselors who live across the U.S. all of whom are in the 60s, 70 and 80s. These are men that have been in pastoral-type ministry (some for decades), who are Torah-obedient Bible teachers and who love Yeshua. Some of them have been walking in Torah for 50 or 60 plus years. I asked them the following question: Is America on the verge of a leftist revolution to take over this country?” They all inequivacably said yes! They indicated they’ve been watching this slow progression of events coming on us for decades, but now it is finally here. No one knows what life will be like in America for Bible believers if the leftists succeed. They all believe, however, that the Antichrist, socialist leftists will succeed. No one knows the timeframe, but it will happen. In the mean time, no one is expecting a great revival in the American mainstream church that will turn this thing around.

There you have it.

I am not a prophet, nor the son of one. I am a nobody. I am simply reading my Bible and looking at trends and patterns as I study history. That’s all.

So what do we do now? Run and hide or stand and fight? Or what?

I have been wrestling with this question for some time. My flesh wants take my family and go hide out.

But I’ve just turned a corner in my thinking.

Our most powerful weapon is prayer, faith and the proclaiming of the gospel message to those around us come what may, and to walk in faith trusting in YHVH Elohim to care for us in the midst of it like never before. We have before us the greatest opportunity in the history of the world to go after the lost sheep of the house of Israel who will be searching for answers with the only message that can save and deliver them in these last days—and the only message that makes the demons in hell and their earthly minions tremble and hide in fear. This and our faith in Elohim is our greatest weapon and the most powerful force in the universe. Now is the time to awake from our slumber, to confront and to overcome our fears and apathy, and to prepare our hearts and minds for the divinely appointed task that lays before us as blood-bought servants of the Most High—Yehovah Elohim.

That’s it. You know that what I’m saying is true.

For I am not ashamed of the gospel of Messiah, for it is the power of Elohim to salvation for everyone who believes, for the Jew first and also for the Greek. (Rom 1:16)

Now, I invite you go to the next study in this series on this blog and read my commentary on Psalm 91.

5 thoughts on “Are We Experiencing a Leftist Revolution in America? (part 2)”