In the following several verses we see an amazing prophecy concerning the two houses of Israel who, generically speaking, have become the modern church and the rabbinic Jews.

Here Isaiah prophesies about the canonization of the Bible into two subdivision—the Torah (or loosely speaking, the Old Testament) and the Testimony (the New Testament). He also predicts that each of these two religious groups (the Jew and he Christians) would spiritually stumble over or have a problem with the identity of the Messiah, who is the Stone of Stumbling and the Rock of Offense. In general, as we shall see, the Christians struggle with the pro-Torah message of the Old Testament (or Word of Elohim), and the Jews reject the message of the New Testament (or Testimony of Yeshua) about the Messiahship of Yeshua. 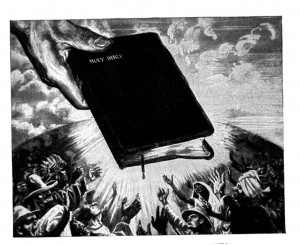 Isaiah 8:16, 20, Bind up the testimony…my disciples. Heb. testimony means “confirmation, attestation.” This appears to be a prophecy concerning Yeshua’s disciples, whom he commissioned to “seal the Torah” (loosely speaking, the Old Testament or OT) and add to it the Testimony about him (the New Testament or NT). John seems to be making reference to these two general subdivisions of the Word of Elohim in the Book of Revelation (Rev 1:2,9; 6:9; 12:17; 14:12).

Here Isaiah is prophesying the canonization of the NT by the disciples of Yeshua (who is mentioned in verse 13). Did you know that the NT’s name for the NT isn’t the NT, but the Testimony of Yeshua—a name that John who finalized the NT canon gave it when he was writing the Book of Revelation? There, he calls the OT or Tanakh the “Word of Elohim” and the NT “the Testimony of Yeshua” (see Rev 1:2, 9; 6:9; 12:17; 14:12; 20:4).

What do the words bind and seal signify? The Hebrew for the word bind means “to close.” The word seal means practically the same — “to cap off, to enclose.” This is exactly what the apostles did with the message which Yeshua the Stone and Rock (Isa 8:14) gave them. They were to complete it. Bind it up. Close it shut. The authority to perform such an important job may have been reflected in Messiah’s teaching that the apostles had power to ‘bind on earth’ (Matthew 16:19). The word to bind has the significance of authorization or giving judgment, just as the word unbind means “not to receive or not accept. …” In a word, the apostles felt that they had authority, even from the Old Testament, to bind, seal, authorize and canonize the Law and Testimony of Messiah. This meant to put the teachings of Messiah in a book, just like the Old Testament was given to the early Jews (Restoring the Original Bible, by Ernest Martin, pp. 298–299).